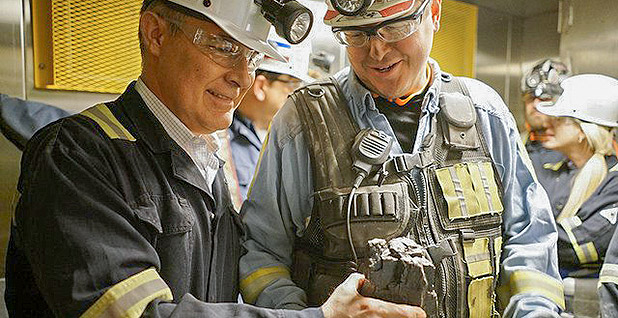 Seventh part of a series.

With a photo of EPA Administrator Scott Pruitt grinning and shaking the hands of coal miners, the sign outlined the agency mission in three simple bullet points: "Protecting the environment," "Engaging with partners" and "Sensible regulations for economic growth."

The placard — particularly its emphasis on the economy — offers evidence of ground-shifting changes underway at EPA as the Trump administration’s first 100 days come to a close. President Trump, who mocked the agency and lambasted environmental regulations as a candidate, has held fast to campaign promises to target EPA for downsizing and turn the tide on its Obama-era rules.

Whether Trump’s vision of a smaller, less regulatory EPA hardens into long-term reality depends on how much resistance is offered by Capitol Hill and the courts. Still lacking at the agency are the president’s nominees, with Pruitt, the former Oklahoma attorney general who often tangled with EPA, the only one confirmed by the Senate so far.

"They seem to know what they’re doing, and they have gotten moving quickly. They’re off to a good start," said Myron Ebell, director of the Competitive Enterprise Institute’s Center for Energy and Environment, who led Trump’s EPA transition team.

"All of that good start is threatened by not having key people in the confirmable positions."

Pruitt’s confirmation was drawn out for weeks as Senate Democrats resisted approving the vocal EPA critic to take the agency’s reins. On Feb. 17, he was confirmed on a mostly party-line vote, 52-46 — the most recorded "no" votes of any administrator nominee in EPA’s history.

Trump hasn’t picked anyone yet to join Pruitt, who has been at EPA for more than two months. The president hasn’t announced nominees for the other dozen empty seats at the agency, including deputy administrator and general counsel, as well as chiefs for the air, water and enforcement offices.

"I’m very worried that the White House personnel office seems incapable of filling these Senate-confirmable positions. You can’t do the business of government for very long if you don’t have anyone who can make decisions," Ebell said.

Career EPA officials now hold those top jobs on an acting basis. Many of them helped craft regulations in the Obama administration that are now being rolled back — notably the Clean Power Plan and the Clean Water Rule.

"Those are career civil servants. They are opposed to the president’s regulatory agenda," Ebell said. "I give them high marks on what they [the Trump administration] have done, but they have to fix the personnel problem."

Pruitt has begun to surround himself with appointees who don’t need Senate confirmation.

There have been bumps in even putting together EPA’s small political staff.

Several members of Trump’s EPA "beachhead" team have left, including David Schnare, who made allegations about the misuse of federal funds and officials not adhering to Trump’s agenda on his way out the door. Don Benton, EPA’s senior White House adviser who was reportedly frozen out of meetings by Pruitt, also exited after he was appointed as director of the Selective Service System.

‘Where is this going to end?’

"The war on coal is done. It’s over," Pruitt said to cheers from the crowd. The photo op, including a trip underground and a hard hat gifted to the EPA chief, was the kickoff of Pruitt’s "Back-to-Basics" agenda, later memorialized in the poster in EPA’s lobby (E&E News PM, April 13).

That order is one of several moves by the Trump administration’s EPA to rein in the agency’s regulatory power — many of which have been applauded by industry that chafed under agency rules in the past.

Pruitt turned back a ban on the pesticide chlorpyrifos, despite agency research saying it was a risk to human health. The agency also restarted a review of the Obama administration’s tough fuel economy rules for automakers.

The EPA chief delayed by nearly two years implementation of safety rules for chemical plants and industrial facilities to give EPA time to reconsider them.

Pruitt has begun a review of the Clean Water Rule — also known as the Waters of the U.S. rule, or WOTUS — per another Trump executive order, and has pulled back a request to the oil and gas industry for information on methane emissions.

In addition, EPA under Pruitt’s command may reconsider several regulations combating air pollution, including standards for ozone and mercury as well as emissions from power plants’ startup, shutdown and malfunction events, according to court filings.

Environmental groups have threatened to sue, if they haven’t already, in response to many of Pruitt’s rollbacks — expect years of litigation until anything is resolved. Still, the scale and speed of the rules’ retreat have surprised the EPA chief’s critics.

"The list goes on and on. It goes well beyond some of the areas that Trump was expected to target, like the Clean Power Plan and Waters of the U.S. Where is this going to end?" said Bob Sussman, a Clinton-era deputy EPA administrator who also served as a senior policy adviser to President Obama’s first EPA chief, Lisa Jackson.

Sussman added, "All of them will end up in litigation. I think you’re going to see an agency consumed with rollbacks of these rules and then litigation dealing with those rollbacks."

EPA has only just begun retracting its rules.

Under order from Trump, EPA has set up a regulatory reform task force, led by Dravis. The agency has started soliciting comments and setting up meetings on what rules to kill next.

Pruitt has been front and center in EPA’s deregulatory push.

The agency chief has met with governors and business groups as he talked up a kinder, gentler EPA that will work more with state regulators. Along with visiting a Pennsylvania coal mine, he stopped by a Superfund site in Indiana and a Missouri power plant in recent weeks to espouse the agency’s new agenda.

That high profile has attracted scrutiny, too.

Democratic senators have questioned whether the EPA chief has sought ethics advice, considering his work in rolling back rules he once litigated against as Oklahoma attorney general. They have also asked him to clarify his Senate confirmation hearing testimony on his use of personal email for official business — he said he hadn’t used it but he had, according to press reports.

Pruitt has decided against attending that fundraiser (Greenwire, April 27).

The administrator has also been subject to some conservatives’ grumbling. Though the EPA chief has pushed for the United States to exit the Paris climate change accords, he has been more reluctant to address the agency’s 2009 endangerment finding against carbon dioxide and other greenhouse gases, the basis for its global warming rules.

Ebell said he hopes Pruitt will reverse that finding, as some groups have petitioned him to do.

"I would feel more secure if the administration was plowing ahead with the endangerment finding. There is still time," Ebell said.

‘You have to think big

EPA has also begun to cut back its workforce.

Last week, EPA said it would start offering employees early retirement and buyout packages to comply with another Trump order to downsize federal agencies. Top officials have already had to deny speculation that they planned to close the Chicago-based Region 5 office — EPA’s largest regional office, with more than 1,000 employees.

Anxiety among career employees has been high since Election Day, when Trump won the White House. That nervousness has only increased since last month, when the president proposed a 31 percent or $2.6 billion cut to EPA funding, which could result in 3,200 fewer positions at the agency.

Pruitt initially pushed back on those budget cuts, but the White House responded by slashing even further into EPA funding. Capitol Hill is expected to resist cuts to the agency, as well, though it’s unclear how many programs will be saved in the end.

"There is going to be a big fight in Congress," Ebell said. "I don’t think they will end up with a 31 percent cut, or 3,000 or so positions out. You have to think big if you’re going to get anything at all."

Nevertheless, Sussman believes Trump will leave his mark on EPA, and it won’t be pretty.

"EPA has already been downsized from its historic peak, and to further emasculate the agency and eliminate major programs as well as fire people involved with enforcement, this is all going to take a heavy toll on the agency’s effectiveness and credibility," Sussman said.

"I don’t know how far this will go, but I don’t think EPA will escape unscathed."