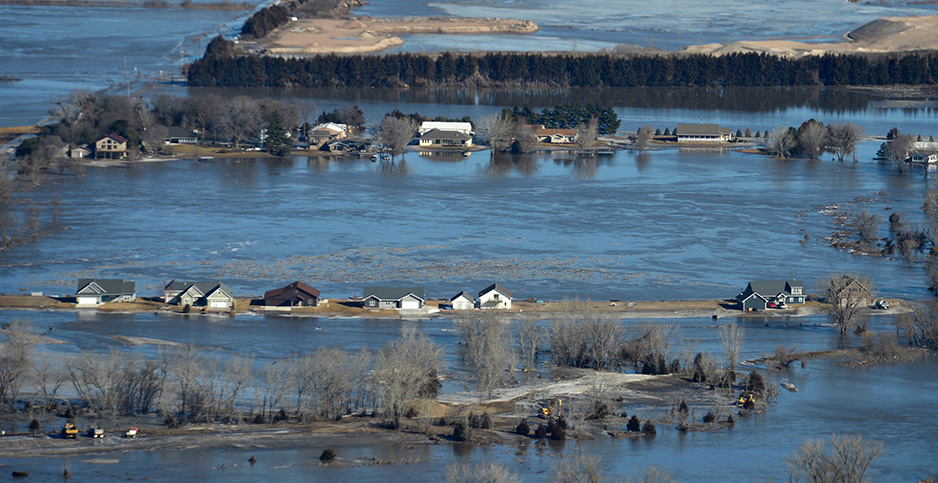 Homes in Nebraska are surrounded by floodwater last year. The Trump administration is delaying work on the National Climate Assessment. SrA Jamie Titus/UPI/Newscom

The Trump administration is slow-walking a mandatory climate report by not seeking out scientists to work on it, says one of the authors of the last National Climate Assessment.

Donald Wuebbles, a climate scientist at the University of Illinois who co-led the first volume of the fourth National Climate Assessment, said the Trump administration is late in putting out a call in the Federal Register for researchers to produce the fifth version.

"It’s not being approved to go out, so therefore they’re just sitting on it. And I don’t know if it’s NOAA or the White House, but somebody’s sitting on it, so that’s just holding up getting up the NCA 5 going," Wuebbles said.

By law, Congress and the White House are supposed to receive a report no less than every four years on the state of climate change and its impacts on humanity and the natural world.

The fourth version was unequivocal in its assessment of the problem. "Earth’s climate is now changing faster than at any point in the history of modern civilization, primarily as a result of human activities," noted the authors.

That sentiment contrasts with the views of President Trump, who previously has described climate change as a hoax.

The Trump administration tried to bury the last version of the assessment, in 2018, by releasing it the day after Thanksgiving.

Administration officials then spent months preparing an adversarial review of its findings. That effort ultimately was scuttled by the campaign, but Trump told the architect of the scheme that he might revive it after the election.

The next version of the report is supposed to come out in 2022, which means the important early step of recruiting the dozens of scientists who will contribute to it needs to start now, Wuebbles said. The review is a massive undertaking that can take two years to complete, he said.

Wuebbles said the 2020 presidential election is likely playing a role in the delay.

"A lot of things in government are being held up because of the election, so you can talk about interference in almost everything these days," he added.

The outcome of the presidential election is all but certain to have a major effect on the next iteration of the National Climate Assessment. The report is used by policy planners and local governments to help make spending and infrastructure decisions.

The Trump administration, which has focused on weakening or ignoring climate science, would like to revamp the assessment, according to William Happer, a former senior director in the National Security Council.

Happer has told E&E News that the administration purposely released the last National Climate Assessment on the day after Thanksgiving to bury its findings, and that Trump was angry after it was released.

Happer, who claims the world is in a CO2 drought, also said he would like to be an author of the National Climate Assessment. He told E&E News that Trump wants to conduct an adversarial review of climate science — possibly as a prime-time television special — but wants to wait until after the election (Climatewire, Feb. 28).

"This is on hold; we’re not going to abandon it," Happer said Trump told him.

The White House recently has recruited climate deniers and critics to fill senior roles at NOAA — promising some candidates they could shape the future direction of the agency.

David Legates was appointed to serve as NOAA’s deputy assistant secretary of Commerce for environmental observation and prediction. He has made years’ worth of false climate claims that are in conflict with NOAA research, including a July op-ed in The Christian Post that read, "restricting carbon dioxide will have little impact on our climate."

In fact, NOAA and all the world’s top science agencies long ago concluded that restricting carbon dioxide is the primary way to mitigate human-caused climate change.

Outside advisers close to the White House said Legates was recruited to shape the next climate assessment.

The findings of the National Climate Assessment are backed by hundreds of peer-reviewed studies and are in line with research produced by the world’s top science agencies.

The Trump administration criticized the last version for focusing on "extremes." In reality, it outlined a number of scenarios, including those with less severe consequences.

Steve Koonin, who collaborated with Happer on the aborted attempt to challenge the last version of the National Climate Assessment, said Legates is well positioned to produce a report that would present a version of climate science as being less alarming.

Koonin, a physics professor at New York University, said he pitched White House officials on the idea of incorporating an adversarial review into the National Climate Assessment. The exercise could allow science critics to use discredited theories to challenge mainstream climate research, scientists have said.

"There’s a good reason to look hard at the way the science has been presented in previous government reports," Koonin told E&E News. "It’s good that there are people now in those organizations that are willing to do a more objective presentation than we’ve had before."