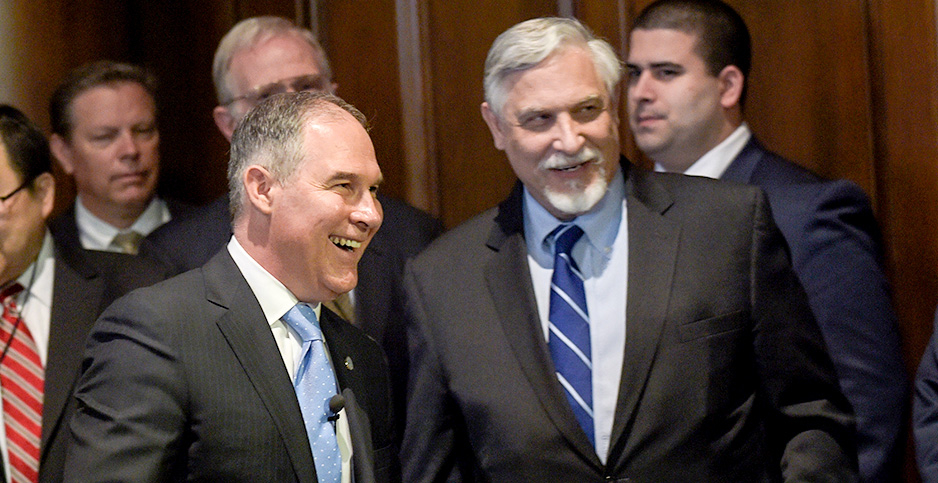 Trump administration officials had a plan to pull EPA climate regulations out by the roots.

One month after President Trump’s inauguration last year, then-EPA official David Schnare sent an email with a document that laid out a strategy for reconsidering EPA’s 2009 endangerment finding for greenhouse gases, the scientific determination that underpins federal climate change rules, according to documents released to E&E News under the Freedom of Information Act.

Schnare, who was on the EPA transition team and "beachhead" team of early political appointees, pushed the administration to be aggressive on unraveling the finding. He’s previously spoken about his disappointment that EPA Administrator Scott Pruitt wasn’t more aggressive on undermining the finding and that its reconsideration was axed from a major Trump executive order on "energy independence" (Climatewire, Dec. 4, 2017).

The newly released document shows exactly how the Trump team planned to wage its attack.

The document notes that the agency had already received petitions to reconsider the finding and that climate science completed since 2009 "significantly undercuts the finding."

It also says that if the reconsideration finds there’s no endangerment from greenhouse gases, it "automatically provides the authority needed" to withdraw "high-cost, low value" climate rules. That would include the Obama administration’s signature climate rule, the Clean Power Plan.

Also included are steps for reconsideration. Those include: building a record of decisionmaking that would hold up in court, relying only on studies where the underlying data are publicly available and relying on an "open public process (crowd sourcing)" to provide "independent peer review."

Schnare told E&E News in an interview yesterday that the document was intended to deliver on what Trump wanted.

The transition team prepared plans for the administration based on Trump’s speeches, Schnare said. "It was very clear that climate change regulations were high on his list of things that needed to be addressed."

But Pruitt fought the plan, said Schnare, who left EPA in March citing disagreements with the EPA boss.

"Once Pruitt showed up, that process ended," he said. "He had been led to believe that the political cost was too high, and he was led to believe that by people in the Senate and staffers." Pruitt’s chief of staff, Ryan Jackson, previously worked for Sen. Jim Inhofe (R-Okla.).

"As a result, Pruitt and I discussed it, and he said, ‘I’m not doing it,’" Schnare said. Pruitt told Schnare he had his own solution but wouldn’t say what that was, Schnare added.

Pruitt has repeatedly questioned mainstream climate science and has called for a military-style "red-team" debate on the issue. Some who hope to see EPA jettison the endangerment finding are hopeful that such a red-team exercise would ultimately set a foundation for that to occur.