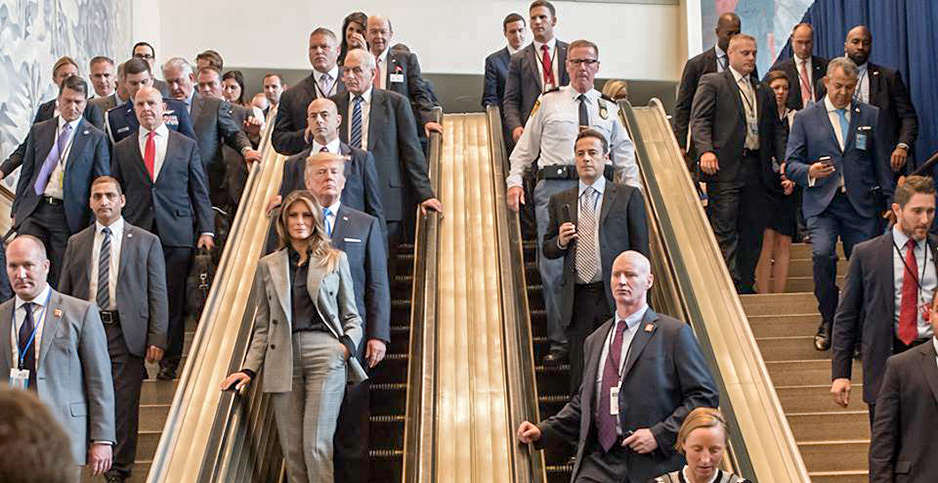 The Trump administration is reviewing the social cost of carbon. Andrea Hanks/White House

Folded within the Trump administration’s plans to repeal a major Obama-era climate rule is an obscure but highly consequential metric estimating the costs of climate change.

The so-called social cost of carbon is a mathematical evaluation of how much the emission of 1 ton of carbon dioxide is likely to cost society through future climate change — given damages to infrastructure, agriculture, human health and otherwise. It’s a little-known value in the public sphere, but one that contains tremendous potential to influence the cost-benefit analyses that help shape environmental policy, and it’s long been the subject of controversy.

In its proposed repeal of U.S. EPA’s Clean Power Plan — a 2015 rule to limit power plants’ greenhouse gas emissions — the Trump team included a lengthy report that dramatically altered the costs projected by the last administration.

The Obama administration pegged the social cost of carbon at about $42 per ton by 2020. But the new EPA document significantly lowers that estimate, placing it between $1 and $6 per ton.

More broadly, that number crunching suggests that Trump’s aides will place a much lower emphasis on the costs of climate change in future rulemakings across government; the administration is in the process of reconsidering a swath of President Obama’s climate regulations at EPA and other agencies. It comes after some federal courts have chided agencies for failing to adequately consider the climate impacts of fossil fuel projects. Some have also noted that although Trump has previously called climate change a "hoax," his administration did account for costs of climate change in its draft rule.

Some of Trump’s supporters, including advocates of the oil and gas industry, have long criticized the use of the social cost of carbon in environmental regulations or suggested that its value is too high. Indeed, higher values of the social cost of carbon suggest greater damage caused by carbon emissions, which generally justifies more stringent regulation of the fossil fuel industry.

Last November, a memo penned by Thomas Pyle, president of the Institute for Energy Research and then the leader of Trump’s Department of Energy transition team, suggested that the new administration’s energy plan would include a focus on "ending the use of the social cost of carbon in federal rulemakings." The memo was obtained by the Center for Media and Democracy.

Some conservative members of Congress have thrown their support behind this idea as well. In February, several House Science, Space and Technology subcommittees convened a hearing to evaluate the methods used to calculate the social cost of carbon. And in his opening remarks, committee Chairman Lamar Smith (R-Texas) suggested that the Obama administration’s methods were "faulty" and that the new administration should "eliminate the use of the social cost of carbon until a credible value can be calculated."

Some experts feel EPA has failed to provide adequate scientific rationale for its revised estimates.

Michael Greenstone, an economist at the University of Chicago and former chief economist for Obama’s Council of Economic Advisers, suggested in an interview with E&E News that the methods behind the revised estimates constituted little more than "just an effort to find the dials that you could turn to bring the number down." Greenstone helped convene the first federal working group to begin assessing the social cost of carbon in 2009.

"This was not evidence-based policymaking, this was policy-based evidence-making," he said. "What that means is the policy gets set, and then you have to go backwards and create the evidence to support it."

Meanwhile, a new report from the Government Accountability Office released this week is urging the Trump administration to seriously consider the economic risks of climate change and develop the appropriate federal responses. While research on these risks is still emerging, it notes, studies suggest that extreme weather events have already cost the federal government hundreds of billions of dollars over the last decade, and the costs will likely rise as the planet continues to heat up.

The social cost of carbon relies on a series of complex calculations involving models, which help predict the damages likely to be incurred by future climate change, and an economic principle known as a "discount rate," a kind of interest rate that helps address the idea of how much society is willing to pay now to avoid damages in the future. Changes to any of the steps involved in the calculations can result in drastically different values.

The methods for the calculations were first developed by a federal working group in 2009, and experts have spent the eight years since debating whether and how they should be updated. Many experts have suggested that the Obama-era value may have actually been too low — that, in fact, carbon dioxide emissions will cause far more economic damage than previous estimates suggest.

A National Academy of Sciences report released earlier this year on the calculation of the social cost of carbon included a number of recommendations for updating the methods used in the calculations to make them more scientifically sound.

But the new administration’s revised calculations involve methods that largely ignore those recommendations, according to Richard Newell, co-chair of the committee that released that report and president and CEO of think tank Resources for the Future.

For one thing, the lowest value presented in EPA’s report relies on the use of a higher discount rate than was applied in the Obama-era calculations. In simple terms, a higher discount rate results in a lower social cost of carbon and vice versa, and there’s been considerable debate about what rate is appropriate. The previous estimate of $42 relied on a rate of 3 percent, while the revised calculations’ lower estimate of $1 uses a rate of 7 percent, which some experts say is too high.

"There are good reasons to think that such a high discount rate is inappropriate for use in estimating the SCC," Newell wrote in a blog post.

And EPA’s report also considers only the domestic social cost of carbon, rather than its cost at a global scale, as has been the focus previously — a highly controversial shift that requires deep consideration of "our values as a society," according to Frances Moore, a professor of environmental science and policy at the University of California, Davis, who has conducted research on the social cost of carbon.

"By using a domestic number, what essentially we’re saying in our evaluation of climate policy is that the U.S. does not care about impacts happening to people not in the United States," she noted.

The Trump EPA said it was following guidelines from the White House budget office and the president that domestic — and not global — damages be calculated.

Other experts have taken issue with what they feel is a lack of justification, scientific or otherwise, from the federal government for making this shift in the first place.

"It’s true that reasonable people have argued against use of the global measure," former Obama White House official Cass Sunstein wrote in a recent Bloomberg opinion piece. Sunstein, who’s now at Harvard Law School, helped establish the federal working group that first addressed the social cost of carbon. "In their view, American regulators should focus only on damage to Americans. And the Trump administration, which is rightly concerned with the costs of regulations, is perfectly entitled to disagree with, and ultimately to reject, the judgments of the Obama administration."

But, he added, he believes the administration made the switch "without offering reasons for its reversal of course."

But even if that were not the case, Moore suggests that the models used to evaluate the climate impacts in the United States — or anywhere for that matter — may not be entirely up to date. In fact, some researchers believe that the current models significantly underestimate the economic impacts of future climate change and that even the Obama-era estimates were far too low.

Moore has published research that suggests the models don’t accurately account for the impact of higher temperatures on gross domestic product and that correcting for this issue could result in a social cost of carbon approximately six times higher than previous estimates have reflected. She’s conducting similar research on the economic impacts of climate change on agriculture, which could be similarly underestimated.

There are many other scientific uncertainties about the future impacts of climate change that are still not well-addressed by the current methodologies, Moore noted, such as the future effects on national security.

And Greenstone said that as climate science continues to become more advanced, the evidence increasingly suggests that the risks to future societies may be greater than previously thought — an idea that would favor a lower discount rate, rather than a higher one, as used in the revised calculations.

"I think the biggest advance in the last 10 years has been an explosion of research that helps us understand the economic impacts of climate change," said Greenstone, who also works with the Climate Impact Lab, a collaborative group of scientists and economists investigating the impact of climate change on human societies. "And while no one has pulled all that together yet, when you start to look sector by sector, it looks a lot like the impacts are larger than we understood it a decade ago. And it’s not just that they’re larger, it’s from much more reliable evidence."

And many scientists generally have expressed a belief that even the Obama administration’s estimates may be too low. One 2015 survey of experts on the economics of climate change, conducted by researchers from the New York University School of Law’s Institute for Policy Integrity, found that more than half the respondents said that the government’s estimates at the time were too low, while 8 percent thought they were too high.

All of this said, the best approach to the social cost of carbon still remains widely debated among scientists, and other researchers have also suggested that the Obama-era value was perhaps too high. This debate was reflected in the National Academy of Sciences report, which did not take a position on whether the value should be higher or lower, but rather emphasized the importance of basing all steps of the calculations on the most up-to-date science and updating estimates every few years in order to keep up with the latest research.

And some experts remain unconvinced that this approach is being taken by the federal government.

"There are a number of uncertainties that still remain in estimating the SCC, and will continue to remain given the complexity of climate change itself as well as its many impacts," Newell said in an email.

"The goal should not be to think we can eliminate that uncertainty — we cannot," Newell said. "Rather we need to do the best job possible of properly characterizing that uncertainty. And in response to that understanding, take actions that respond effectively and efficiently to those risks."