Trump throws in for the long haul in Puerto Rico 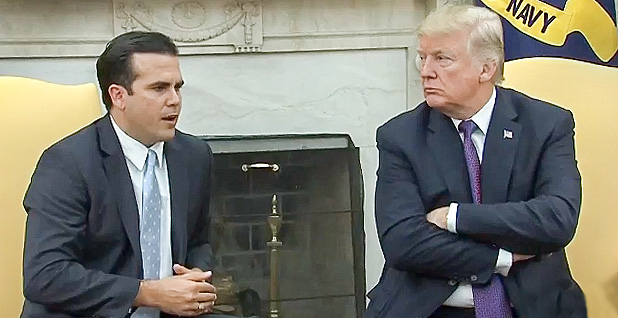 President Trump and Governor Ricardo Rosselló of Puerto Rico speak to reporters about the federal response to Hurricane Maria. C-SPAN

President Trump said yesterday his administration would support Puerto Rico Gov. Ricardo Rosselló in restoring electric power to the U.S. territory, where most residents have been without electricity for a full month, and then help with the multibillion-dollar task of building a more storm-resistant grid.

The two leaders made a duet of mutual praise, Rosselló thanking Trump for the rapid disaster declarations and the dispatch of FEMA and U.S. Army Corps of Engineers and shiploads of emergency supplies, and Trump hailing Rosselló’s front-line leadership. "I’d give us a 10" out of 10, Trump said of his administration’s response. "The facts are that every petition that we have made to the president of the United States until this moment — it has been answered," Rosselló said.

But the facts also are that Puerto Rico remains a disaster area unlike anything the nation has experienced in modern times, said Tomás Torres of the Institute for Competitiveness and Sustainable Economy of Puerto Rico.

"After a month, 90 percent of the people of Puerto Rico are without power," Torres said, interviewed as he traveled to Miami for a conference on the island’s desperate plight. "We need to restore power to save lives and restore this economy."

Acknowledging the emergency, Trump also signed his name to Puerto Rico’s future, "long-terming it," he said.

"I know you were talking about rebuilding your electric plant long before the hurricane; you’ve been wanting to do that for a long time," Trump said to Rosselló, as reporters joined the meeting. "So maybe this is a reason that we can do it. And we’ll help you and we’ll all do it together."

No details were provided on how Puerto Rico’s dilapidated power grid might be transformed, where the funds would come from and who would lead the planning.

Rosselló faces significant obstacles, including infighting among the Puerto Rico Electric Power Authority (PREPA), the grid operator; the Puerto Rico Energy Commission, the agency created in 2014 to impose independent oversight on the state-run electric monopoly; and the financial oversight board established under Congress’ plan to reorganize Puerto Rico’s $70 billion debt.

Instead of details, reporters heard Rosselló repeating his pleas and Trump offering sympathy and promises to see the crisis through, even though the commitment of some 18,000 pairs of federal boots on the ground is not open-ended. "You know, at some point FEMA has to leave, first responders have to leave, and the people have to take over," Trump said.

"I don’t want to just fix poles — you can’t just fix the poles," Trump said. "We have to build a brand-new plant," he said meaning the totality of the island’s power generation. "Or we have to do, essentially, a renovation that’s so large it’s going to be like a brand-new plant — one or the other. We’re looking at both right now."

Trump told the governor during a photo-op in the Oval Office that he’s given his "blessing" for Congress to design a "plan and payment plan" for rebuilding Puerto Rico’s infrastructure. "Because you are talking about some substantial numbers," Trump said, "and I guess you knew that."

Today, however, the leadership of the U.S. Army Corps of Engineers is focused on one thing: to simply bring a shattered grid back up, not modernize it.

PREPA’s 34,000 miles of aged power lines and circuits traced a bull’s-eye for hurricanes entering the Caribbean. Hurricane Irma mostly missed. Maria and its 150 mph winds did not.

For now, the Army Corps is essentially restoring that bull’s-eye, mostly replacing wire for wire, pole for pole, tower for tower, following its policy as a steward of public funds from FEMA.

"Our mission assignment from FEMA, under this emergency response, is to repair the grid," José Sánchez of the Army Corps said last week, in an interview with E&E News. "It is not to rebuild the grid, it is not to augment the grid or to strengthen the grid."

The Army Corps has received $577 million for its work in Puerto Rico so far, a spokesman said.

This week, FEMA awarded a $240 million contract to Fluor Corp. of Irving, Texas, for grid repairs. The Army Corps has placed an initial $115 million order for supplies and materials that includes more than 50,000 concrete, galvanized steel and wood utility poles, and 6,500 miles of transmission and distribution line cable. It’s installed 106 temporary generators.

The Army Corps said 403 crews with three to five people each are working on restoration, including works from the utility PREPA and other contractors. Another 200 crews will arrive within a week, an Army Corps spokesman said.

"We do understand they want to restore the power quickly," says Jorge Camacho, former chief of infrastructure and system planning for the District of Columbia Public Service Commission and now a consultant who joined in the damage assessment of the island’s grid.

But an opportunity could be lost. "If they’re going to repair it the way it was before," he added, "if it’s not hardened or not up to safety standards, you are missing an opportunity."

"We need to energize the island," said José Román Morales, president of the Puerto Rico Energy Commission. "We have priorities at all the critical facilities. We have places where elderly live that have no power; we have hospitals still running on backup generation. Restoring power is the most important thing to do right now."

But, Morales said, there’s also a grid modernization strategy already before the commission that aims to redesign and strengthen the island’s grid. "You don’t have the same technical challenges because everything is down," he said.

"But the question is funding," he said.

"There is a gross lack of coordination to support the long-term rebuilding of Puerto Rico’s electrical infrastructure, and some entity needs to be identified to provide oversight," said Camacho.

"We need somebody to take the bull by the horns, with a vision of how to harden the system," he said.

The issue posed by PREPA’s critics is whether the bankrupt utility has the ability to build a stronger grid.

But the plan ran into a roadblock in 2016, when the Puerto Rico Energy Commission said it wasn’t very well thought out. The commission said the utility didn’t take renewable power and energy conservation measures seriously enough and placed too much emphasis on expensive construction projects. While allowing some of the new initiatives to proceed, the commission limited work on the proposed LNG terminal to $15 million for planning.

This year, after Hurricane Irma sideswiped Puerto Rico’s grid and Hurricane Maria destroyed it, Ramos notified U.S. utility companies that rather than call on a utility mutual-aid program, he would rely on a small Montana-based contractor, Whitefish Energy Holdings LLC, to mobilize outside contractors.

Whitefish announced yesterday the formal approval and ratification of a $300 million contract with PREPA for repair and reconstruction of transmission lines. It has brought 300 of its employees and subcontractors to the island and is recruiting 700 more.

FEMA has guaranteed 100 percent reimbursement for approved grid recovery expenses for six months, but a Whitefish spokesman declined to explain how its $300 million payment was being covered. "The ultimate payer is PREPA," the spokesman said, adding that cash is flowing between FEMA and the Puerto Rican government and multiple parties tied to the utility.

Congress, of course, controls the money flow, and so far, it is not in unison.

Sen. Lisa Murkowski (R-Alaska), chairwoman of the Senate Energy and Natural Resources Committee, favors a build-it-better approach. In an early October floor speech, Murkowski talked about working with the Army Corps and the Department of Energy to reshape Puerto Rico’s grid for greater resilience.

"We want to look at not only the damage caused, where recovery efforts stand, but also lessons learned," she said. The senator talked about building a more resilient and sustainable grid.

There in hurricane alley, Puerto Rico is in that bull’s-eye for harsher storms associated with climate change.

First, before any real work is done to redesign the grid, comes another round of disaster funding. The U.S. House last week passed a nearly $37 billion aid package to address storm recovery in Texas, Florida and Puerto Rico as well as wildfires in California (E&E News PM, Oct. 12). The Senate is expected to vote on a similar package next week (E&E Daily, Oct. 20).

At DOE, some officials have expressed interest in tackling elements of the rebuilding task as "demonstration projects" to bring newer technologies. Outside of the confines of Washington, Silicon Valley’s big clean energy technology names, such as Tesla Inc. and Sunrun Inc., are joining makers of large-scale batteries such as AES Corp. to pitch their technology to Puerto Rico.

Other members of Congress are more focused on reshaping PREPA’s financial underpinning. Rep. Rob Bishop, the Utah Republican who leads the House Natural Resources Committee, was instrumental in shaping PROMESA, the Puerto Rico Oversight, Management and Economic Stability Act, that is meant to guide the debt-ridden commonwealth back to solvency.

His committee is looking at ways to make the oversight board stronger and more independent of political forces in San Juan, a staff member told E&E News. Bishop also wants to see PREPA broken up and privatized. Those changes could require reopening the PROMESA legislation to fine-tune its oversight provisions, according to committee staff.

"At the very minimum, generation needs to be privatized, and we need a very strong, independent regulator that ensures fees are being charged fairly and everyone is paying," the staffer said.

After decades in which Puerto Rico’s 78 municipalities received free power and many others were billed but didn’t pay, Bishop wants to see the system overhauled. Local political fiefdoms shouldn’t control spending on new projects. Those measures would contribute to a system with better reliability and operating revenues, Bishop believes, which in turn would help local manufacturing.

Democrats on the Natural Resources Committee, led by Arizona Rep. Raúl Grijalva, fear that Republicans plan to use Puerto Rico as a "petri dish" to test privatization and free-market theories, instead of serving island residents.

Summing up the outlook yesterday, FEMA chief Long echoed the day’s hopes. "The traditional recovery is going to require a solution far greater than what FEMA typically puts down," he said. "But that’s why we’re here today working with Governor Rosselló and the president and all of the Cabinet members to figure out what the best way forward is for the longer-term solutions."

Long added, "This could allow Puerto Rico to be a showcase in terms of energy production and others by way of mitigating and innovating."