Trump to allow more car pollution. But by how much? 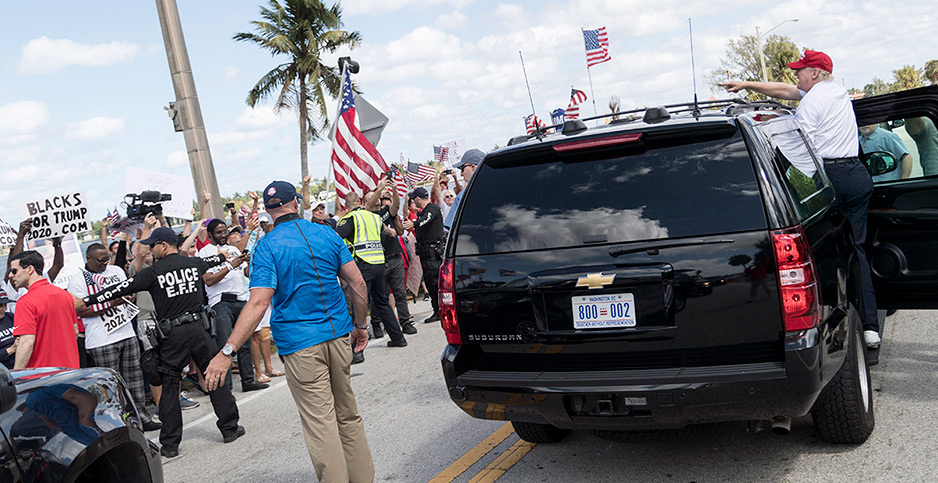 President Trump is poised to relax rules affecting tailpipe emissions in millions of U.S. cars, marking one of his most forceful moves against pollution standards since taking office.

The administration has decided to loosen Obama-era limits on exhaust from cars made from 2022 to 2025, according to people familiar with the decision. A draft declaration is under review at the Office of Management and Budget, and it must be made official by the end of the week.

It will take months before officials decide the full extent of the changes, but the coming announcement means that Americans can expect their new cars to burn more fuel per mile than what was promised by the previous administration. Former President Obama’s ambitious real-world target of 36 mpg by 2025 is headed for the trash bin.

It promises to erode the government’s single-largest program to tackle pollution from the top source of greenhouse gas emissions in the country. Cars, trucks and planes account for one-third of the country’s carbon emissions, and their share is growing.

The regulations, known as the corporate average fuel economy standards, or CAFE, are highly charged politically. A handful of key officials with competing interests have been meeting behind closed doors in recent months to try to hammer out a deal before the April 1 deadline, by which the administration must decide to change the standards or leave them alone.

Now that the decision was made to dial back the stringency left by Obama, the real work is just about to begin.

The White House will have to juggle demands by powerful constituencies as it fleshes out its proposal. On the top of that list are rival auto manufacturers. And then there’s California, a state empowered by a special authority to strictly regulate tailpipe pollution, and it’s brimming with political officials who are determined to poke Trump in the eye for rejecting climate change.

The administration’s path to political victory is narrow. A misstep now could mean years of legal battles with a dozen states and environmental organizations that want to preserve California’s stringent rules on cars. It could also lead to a regulatory quagmire for manufacturers.

"If it continues the way it’s going now, it’s going to be a train wreck," said Margo Oge, who negotiated the Obama standards with car companies as the former transportation head for U.S. EPA. "If I were a major car company right now, I would be pretty nervous."

The Obama administration had held up its rules as one of the most successful climate change programs in the world. If left unchanged, Obama’s targets for cars made in 2017 to 2025 would have avoided 280 million metric tons of carbon dioxide in 2030. That’s the equivalent of taking 59 million cars off the road entirely.

Obama’s EPA set the wheels in motion in 2009 for this week’s decision when it negotiated tough new limits for car pollution. Automakers agreed to double the average real-world fuel economy of the cars they sold to around 36 mpg by 2025, but only if the federal government did a review midway through to see if the targets were still feasible. They agreed to a preliminary deadline of April 2018.

But the Obama administration sped that whole process up in its waning days. It decided at the last minute to maintain its strict targets for model years 2022 to 2025.

Automakers cried foul, and the Trump administration agreed. In a trip to Michigan a year ago, Trump told autoworkers he would reverse that decision and redo the entire review.

The preliminary result of that new review is coming out this week. The Trump administration is giving a thumbs-down to the current Obama-era targets, an outcome long expected.

The wording will be important, for the government must present mountains of new evidence to support its reversal. And then the White House must decide how much it wants to weaken the limits on pollution.

To avoid mayhem with the automakers, and with California, the administration is likely to go after the vehicle rules with a scalpel, not a hatchet, and for that it has blades galore: legislation, design tweaks, special credits and manufacturer petitions.

Automakers call the tweaks added "flexibilities" that will make the rules more streamlined. Environmentalists call them loopholes that would make it easier for automakers to put high-polluting cars on the roads.

"The devil, or the gas guzzler, is in the details," said Friedman, who’s now the director of cars and product policy and analysis for the Consumers Union. "You could dramatically weaken the program by saying we’re just doing tweaks."

The fate of the rules rests with a handful of people.

They include California’s top air regulator, EPA’s air chief, NHTSA’s acting leader and a key White House energy aide. All have met regularly since December. They represent a mishmash of political leanings and missions, empowered by different laws that often clash. Most have called the talks "productive." But if they fail to follow through on a deal, there will be a turbulent split.

"There’s a thousand reasons it might not happen, but there’s so many good reasons it should happen," said Robbie Diamond, the director of Securing America’s Future Energy, a group of military and business leaders advocating for energy independence. "The question is can you get the political tea leaves to align and the politicals here?"

The biggest question is what happens with California (Climatewire, March 23).

The state’s seat at the table stems from a Clean Air Act waiver that allows it to set its own, sometimes more stringent, rules on car pollution. The roots of the waiver can be traced back to the state’s notorious smog problem and its efforts to limit it when disco was as ubiquitous as LA haze. Twelve other states and the District of Columbia have signed on to California’s tailpipe rules. They’ve threatened to sue Trump if he changes them.

Looming over California is the possibility that the Trump administration could revoke the special waiver entirely. Though officials say that’s not their goal "right away," the threat remains a powerful negotiating tool.

Mary Nichols, chairwoman of the California Air Resources Board, is a knowledgeable negotiator, having already hashed out a deal with the Obama administration and automakers to align their targets. California politicians have talked big about standing up to Trump, in part by pursuing stringent climate rules for cars. But Nichols is willing to compromise, out of fear that an outright battle over states’ rights could doom California’s larger goals on climate change. They are reliant on falling car emissions.

"We absolutely need advanced clean cars, including electric vehicles, to meet California’s challenging air quality challenges and climate goals," said Stanley Young, an ARB spokesman. "Our comprehensive analysis shows that the technology for those cars is appropriate and feasible, but we are also prepared to look at any additional evidence or data if presented to us."

The other veteran regulator in the room is Bill Wehrum, EPA’s air chief and a political appointee. He’s dealt with the Clean Air Act for decades as a top EPA official and industry lawyer. That means many are hoping he’ll strike a conciliatory tone, one that he’s tried to keep up publicly.

"Our objective is to stay together," he told reporters at an industry event earlier this year. "I have no interest whatsoever in withdrawing California’s authority right away."

But he has aggressively sought to limit California’s authority before, successfully arguing for the denial of its waiver in 2006. He also answers to EPA Administrator Scott Pruitt, who has spoken more harshly toward California, saying the state was "not the arbiter" of U.S. car rules.

Wehrum has other players to make peace with inside the federal government. Both EPA and the Transportation Department’s NHTSA have a role in regulating tailpipes. And they have long clashed over their different missions.

NHTSA has been setting fuel economy targets under the Energy Policy and Conservation Act since 1975, seeking to reduce dependence on foreign oil. Obama’s EPA started setting greenhouse gas targets for tailpipes after it found that carbon emissions endangered public health under the Clean Air Act.

Under Obama, EPA led the way. Now, Trump is trying to empower NHTSA.

That means Heidi King, who was appointed deputy administrator of the safety agency and who is representing the Transportation Department in the talks because it lacks a leader, could hold the key.

Her staff has to write new CAFE targets for model years 2022 to 2025. That could form the skeleton of the entire program. It will come in the form of a notice of proposed rulemaking, but only after other negotiators approve. That could take months after this week’s decision.

Leaked documents show the Transportation agency is focused on potential collision dangers of smaller, more fuel-efficient cars and considering lowering fuel economy targets by as much as 23 percent.

"I’m concerned now that what NHTSA is doing could not be scientifically valid, after all the work that has taken place in an open, peer-reviewed process that California and EPA have done," said Oge, the former EPA official under Obama. "We know this administration doesn’t have an interest in actual science and actual data."

The last person in the room is Mike Catanzaro, Trump’s domestic energy policy adviser. He took the first step toward hammering out a deal when he called Nichols in September.

Some conservatives have urged Trump and Pruitt to scrap the rules, although that represents a fringe position.

A win for the White House would allow Trump to say he helped domestic manufacturers, while keeping California in check.

Car companies have pleaded with the administration to reach a deal to avoid a patchwork of regulations. They’ve also asked for relief from the ambitious Obama rules.

They complain that the targets make it too difficult to build the cars sought after in the United States, where SUV sales are on the rise during a yearslong period of low gas prices.