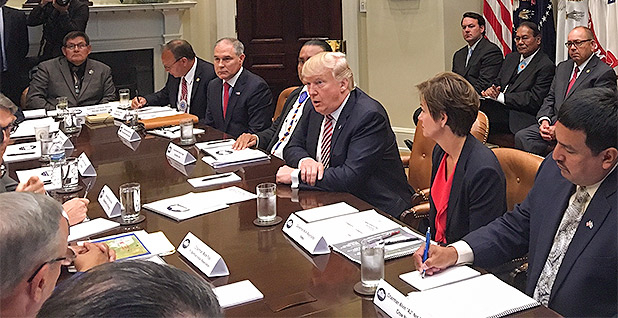 President Trump is expected to boost the nation’s sagging nuclear industry today at the pinnacle of his weeklong promotion of American energy "dominance," according to multiple sources.

Trump could announce a review of nuclear energy’s role in national electricity generation and possible strategies to support it, like establishing a nuclear "czar" in the White House, sources said. Trump is scheduled to speak at the Energy Department at 3:25 p.m.

Other sources said he may debut plans to streamline the review process for exporting nuclear reactor designs. Industry has long complained that it takes too long.

Additionally, Trump is likely to announce U.S. exports of coal or liquefied natural gas to Ukraine, according to a report by Bloomberg and an E&E News source.

Nuclear and coal are facing competition from the surge of cheap natural gas and expanding renewable power in domestic markets. While Trump’s announcements would not help those fuels gain market share in the United States, it could give the industries hope for building international demand.

The efforts would also reinforce the administration’s message of establishing the United States as a global energy leader in the pursuit of helping other countries build zero-carbon nuclear fleets and thwarting attempts by Russia to exert power through energy exports.

The nuclear industry contends that long-standing export policies in the United States are hampering the sale of reactor technologies and the expansion of services related to engineering and operational expertise. They could be worth billions of dollars in the international market, industry says.

For years, the industry has called for revamping policies that were last revised in the 1980s. The industry says those policies put the U.S. nuclear industry at a disadvantage to countries like Russia and China (E&E News PM, Oct. 1, 2012).

The president’s remarks today will focus broadly on the administration’s strategic vision of energy "dominance," according to a source close to the issue.

"We’ve lived in this age of energy scarcity for 40-plus years," the source said. "Now, that’s a big shift."

Representatives from the nuclear and coal industries said they aren’t familiar with the potential proposals. But they wouldn’t be surprised if they’re announced.

Before Trump speaks, two panels will cover energy issues over the period of an hour.

The president is not scheduled to attend those sessions. He will depart the White House for DOE around 3 p.m., after the panels are over, according to his daily schedule.

Representatives from a cross section of energy industries will participate in the event. Sectors represented include electricity, oil and gas, nuclear, coal and renewables.

Trump could also highlight other steps his administration might take to help the nuclear and coal sectors.

The Energy Department is studying whether renewable power has forced those fuels offline, but the White House is largely dependent on Congress and federal regulators to initiate changes to the nation’s fuel mix.

The Nuclear Energy Institute has urged lawmakers to extend the production tax credit for nuclear plants under construction and for those that may not be completed.

"If we cannot complete them, we will signal that the U.S. is no longer the dominant player in the global nuclear industry," a fact sheet from the group argues. "The world will then look to China and Russia for leadership, which will put them in a position to develop the future standards for nuclear energy and technology use around the globe."

NEI says that the Rosatom State Atomic Energy Corp., the regulatory body of the Russian nuclear complex, says it has received orders for 34 nuclear power reactors in 13 countries.

John Kotek, vice president for policy development and public affairs at NEI, said that if U.S. companies can export their technologies more easily, they can "translate and convey U.S. safety behaviors."

"Countries that are seeking U.S. technology want to work with us in part because we operate the largest, safest, most efficient fleet of nuclear power plants in the world," he said. "When we export nuclear power plants to another country we start what can be a centurylong relationship with that nation."

Most U.S. reactor operators have received or are pursuing extended operating licenses to operate for 60 years. The NRC and industry are investigating whether the plants can be operated safely beyond six decades.

Perry has been particularly vocal in his support for nuclear power. He says the fuel provides environmental and international security benefits.

But while nuclear capacity is growing worldwide, it is not expanding in the United States. Plants have been closing, and more are at risk of being shuttered. States are more likely than the federal government to take action to help nuclear plants stay online.

Kotek said that if Trump does move to speed reviews of technology exports, that could indirectly assist U.S. nuclear generation. Having a healthier international industry would benefit the U.S. fleet, he argued.