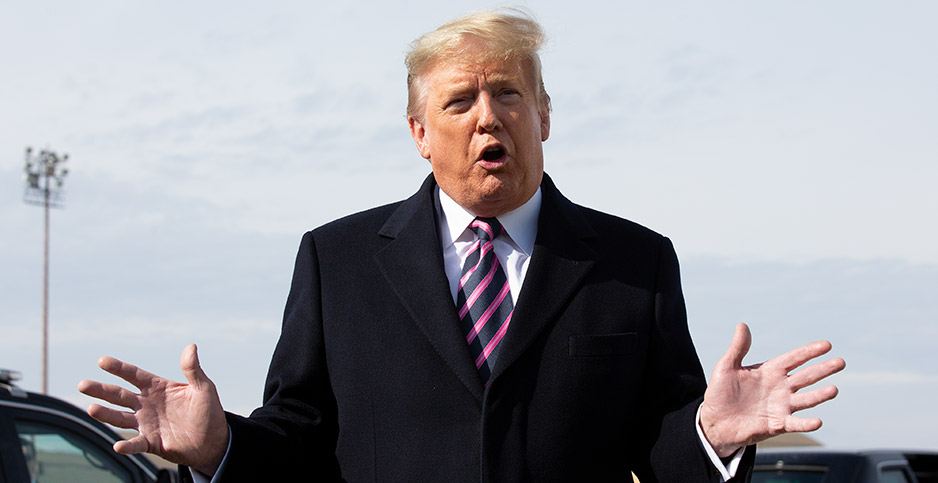 The Trump administration is catering to California’s water-dependent farmers and some of the president’s closest congressional allies by finalizing plans to open up the taps for thirsty cotton fields, pistachio orchards and field crops at the potential expense of fish.

Bernhardt added, according to an account by Fresno-based KMPH-TV, that potential critics will "find out that these [plans] are grounded with reliable science, that they were well thought out, that they’re thoughtful documents [and] that they’re likely to be defensible."

KMPH and another local news outlet, KFSN-TV, covered yesterday’s event, attended by an estimated 600 people, but Nunes’ staff did not admit a Fresno Bee reporter. Nunes is suing the Bee and its parent company, McClatchy, for $150 million; it’s one of several defamation lawsuits he’s currently pursuing.

But John McManus, president of the Golden State Salmon Association, denounced what he called "another shady deal" by Trump.

"This one seizes more Northern California water, which will decimate the environment and the state’s valuable salmon runs, to give to his supporters in the desert-like western San Joaquin Valley," McManus said.

"This president has worked greatly using science — not based on politics, but on science — to allow to have more of that water stay with the Californians and America to make sure we’re secure in our food supply as we move forward," McCarthy said Sunday on Fox News.

While he’s making his first visit to the San Joaquin Valley region since 2016, Trump essentially re-upped his own earlier forays into the very complicated California water scene (Greenwire, Feb. 13).

Valadao is now running to reclaim his seat from Democratic Rep. T.J. Cox.

The Central Valley Project is one of the Bureau of Reclamation’s largest ventures, with 21 reservoirs and 500 miles of canals and aqueducts providing water to three-quarters of the irrigated land in California. The State Water Project serves two-thirds of all Californians, through 21 reservoirs and 662 miles of aqueducts.

"Since settlement of the Central Valley in the mid-1800s, it is no exaggeration to state that human alteration of fish habitats has resulted in dramatic declines in populations of delta smelt, Chinook salmon, steelhead and sturgeon," the NOAA Fisheries biological opinion notes.

Approximately 95% of freshwater wetland habitat has been lost, and dams block access to more than 80% of historical salmonid spawning areas, according to NOAA Fisheries.

The administration’s newly finalized biological opinions that would allow more water to be pumped from the delta are updates of ones prepared roughly a decade ago. The delta, from which water is moved to San Joaquin Valley farms and Southern California cities, has also electrified tension between Trump and California Gov. Gavin Newsom (D). Newsom has threatened to sue the administration over the biological opinions (Greenwire, Nov. 22, 2019).

Federal officials have cited some additional environmental protections that include monitoring fish by boat in the delta, shutting off fish-chewing pumps when smelt and other fish are nearby, and more precious cold water for winter-run salmon at the Shasta Dam and its reservoir in Northern California.