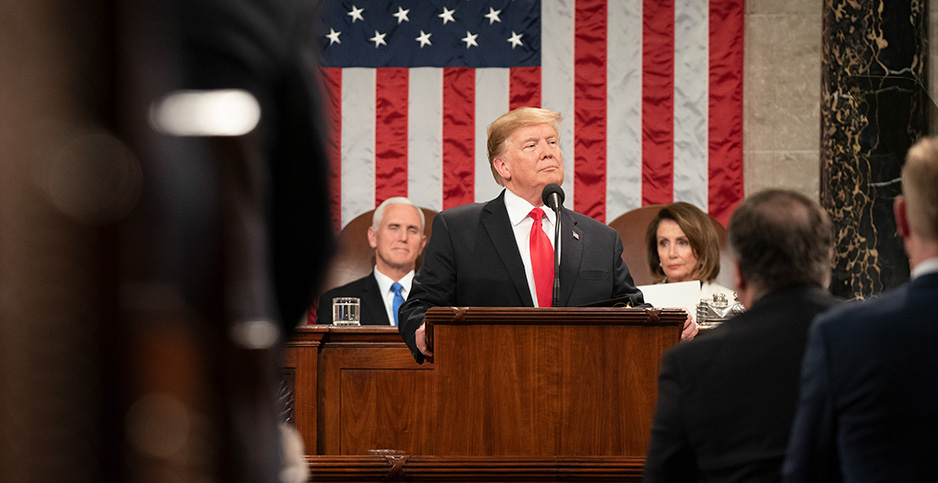 President Trump during his 2019 State of the Union address. The White House/Flickr

President Trump is set to give one of the most unusual presidential speeches in recent memory tomorrow, but his State of the Union address likely won’t signal any significant movement in the administration’s energy and environmental policy.

The Senate will continue final deliberations on whether to remove Trump from office early this week, with a final vote to acquit expected Wednesday — after the president gives his address.

With that backdrop, Trump will give a speech imbued with "relentless optimism," touting the newly minted U.S.-Mexico-Canada trade agreement and the ongoing American "energy revolution," a senior administration official told reporters last week.

The official would not say whether Trump would address the ongoing impeachment trial, but if Trump stays on message, the speech appears poised to point to the thriving U.S. economy and make an initial pitch for his reelection.

In his past speeches to Congress, Trump has ignored climate change and the environment, instead touting his administration’s regulatory rollbacks and focus on the fossil fuel industry.

That’s likely to continue, although Trump’s tone has changed in recent months to mirror the evolving rhetoric on climate from Republicans on Capitol Hill.

The president in the past has variously called climate change a "hoax" and suggested that it could be reversed.

More recently, he’s continued to mock and mislead about climate science in some settings, but in others he has connected climate change to flooding and called it "a very serious subject."

That rhetoric marks no substantive change in his administration’s policy of encouraging fossil fuels and rolling back environmental regulations, but it comes at a time when the congressional GOP is grasping for a message amid polls that show voters increasingly wary of climate change.

As part of that effort, Rep. Bruce Westerman (R-Ark.) is leading legislation to align the United States with an initiative to plant 1 trillion trees, 1t.org, an international climate effort that Trump endorsed last month in a speech at the World Economic Forum annual meeting in Davos, Switzerland.

"We will continue to restore strong leadership in restoring, growing and better managing our trees and our forests," Trump said at the forum.

Louisiana Rep. Garret Graves, the top Republican on the Select Committee on the Climate Crisis, said that kind of rhetoric from the president is an "important" symbol of alignment between the congressional GOP and the White House and potentially indicative of how he will frame environmental issues tomorrow.

"I do think that it’s important that you are seeing this prioritization that’s happening there," Graves told reporters last week. "There’s a lot of talk with members of Congress, with White House officials on this, and I think you are going to continue to see that this isn’t just a flash fire."

Other Republicans said they’re hoping to hear bits and pieces on climate at the State of the Union.

"It’s the biggest factor out there that can make a difference in carbon in the atmosphere, and we’re not pushing that," Bishop added, noting that Trump may not have time to touch on the issue.

While the president’s climate message is hard to peg down, Republicans expect him to promote the success the country has found in oil and natural gas production.

"Because America is now energy independent, and that’s been a goal for presidents of both parties since as long as I’ve been alive," Walden said. "Well, we’re there, and so you have these problems in the Middle East, and we don’t have gas lines in America."

Dubbed "energy dominance," the administrationwide agenda over the past four years to bolster oil and natural gas production has resulted in record production.

The U.S. Energy Information Administration predicted in its annual energy outlook report last week that the United States would become a net exporter of energy this year.

It would be a fitting message for Trump’s State of the Union. Despite his mention of the tree-planting initiative, Trump also used his Davos speech to advertise America’s "virtually unlimited" supplies of energy, namely natural gas, coal and nuclear.

"To embrace the possibilities of tomorrow, we must reject the perennial prophets of doom and their predictions of the apocalypse," Trump said in Davos, in a flick at climate activists like Greta Thunberg, the 17-year-old Swedish activist who also spoke at the economic forum meeting.

"They are the heirs of yesterday’s foolish fortunetellers," the president said to an audience that included Thunberg.

Trump will focus on a few big-ticket policy issues, such as health care prices and immigration, according to the senior administration official, but he does not appear likely to make a significant push for an infrastructure bill, as he has in recent years.

But as ever during the State of the Union, infrastructure is likely to be a prominent topic of conversation, among lawmakers if not in the president’s speech.

Trump has pledged to work on an infrastructure package in each of the last two years, but there’s been virtually no movement in Congress on the issue since he took office.

Democrats juiced the conversation last week, when they unveiled a nearly $800 billion infrastructure bill with a wide array of proposals to green transportation and build up clean energy (Greenwire, Jan. 29).

The Senate Environment and Public Works Committee passed its own, much smaller, bill over the summer, but there’s been little movement so far to get the measure to the floor, despite a looming deadline for the surface transportation reauthorization later this year.

Lawmakers are also nowhere close to agreeing on a way to pay for even a modest infrastructure bill, and for now, it does not appear Trump’s speech will do much to change that.

Democrats will speckle the audience of tomorrow’s address with members of the environmental and clean energy community to emphasize their efforts on climate change and the environment over the last year.

McCarthy started last month as president and CEO of the Natural Resources Defense Council after leading EPA in the second half of the Obama administration and is among the biggest names in the environmental community.

Meanwhile, Rep. Derek Kilmer (D-Wash.) will bring Mike Kelly, a Citizens’ Climate Lobby volunteer from his state. Kilmer is among the sponsors of the "Energy Innovation and Carbon Dividend Act," H.R. 763, the bipartisan carbon tax bill that CCL volunteers have pushed on Capitol Hill.

Lawmakers of the opposing party generally use their State of the Union guests to send a message or emphasize an issue in their district. Last year’s Democratic guests included League of Conservation Voters President Gene Karpinski and 350.org founder Bill McKibben.

On a less political note, Illinois Democratic Rep. Sean Casten’s guest will be Dieter Martin Gruen, a 97-year-old scientist who worked on the Manhattan Project and alternative energy technology over a lengthy career. Casten and other lawmakers nominated Gruen for the Presidential Medal of Freedom last year.

Other guests this time around have a more local tinge.

Rep. Paul Tonko (D-N.Y.), chairman of the E&C Subcommittee on Environment and Climate Change, plans to bring Kathy Hannun, co-founder and president of Dandelion Energy, a geothermal company based in upstate New York.

And Rep. Nanette Barragán (D-Calif.), also a member on the Energy and Commerce Committee, said during a hearing on wildfires last week that her guest to the event would be a firefighter from Los Angeles County.

The invitation, she said, was to help raise awareness about the impacts of wildfires on her home state, which saw power preemptively shut off last fall for some 2.5 million people due to the threat of fires.

"In Southern California, Los Angeles County Fire Chief Daryl Osby has been outspoken on this, stating that climate change is undeniably a part of why these wildfires are more devastating and destructive than ever before," she said during the hearing.

"I think it’s such an important issue that he is going to be my guest at the State of the Union to talk about the impact that wildfires are having and being intensified by climate change," Barragán said.