Trump to order Interior to review 50-plus sites 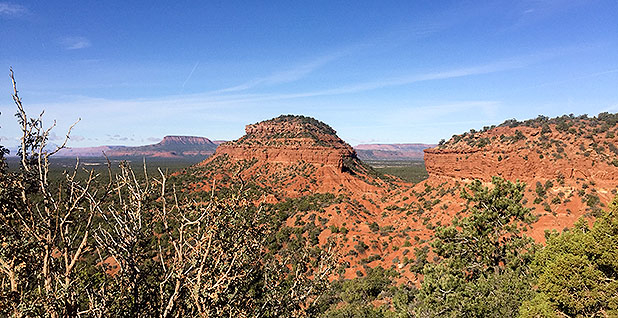 President Trump this week will order the Interior Department to conduct a review of at least 50 national monuments to determine whether existing boundaries are "well beyond the areas in need of protection" and to recommend potential changes, a White House official told E&E News.

The official, who spoke on the basis of anonymity, said the executive action will address the Antiquities Act of 1906, which permits presidents to declare federal lands as monuments in order to protect their historical or scientific value and may restrict activities on those lands.

"Past administrations have overused this power and designated large swaths of land well beyond the areas in need of protection," the official said. "The Antiquities Act executive order directs the Department of the Interior to review prior monument designations and suggest legislative changes or modifications to the monument proclamations."

Another source familiar with the anticipated executive order, who spoke on the condition of anonymity, told E&E News that the review would focus on the "necessity, scope [and] size of designations."

While presidents have designated monuments since the creation of the Antiquities Act in 1906, the order will not include every action since that time, the source said.

The Salt Lake Tribune reported last night that the president on Wednesday will direct Interior Secretary Ryan Zinke to review only monuments created since 1996.

The White House action comes on the heels of a monthslong effort led by House Natural Resources Chairman Rob Bishop (R-Utah) and Utah Gov. Gary Herbert (R) to rescind the Bears Ears National Monument, designated by President Obama during his final weeks in office, as well as to review the boundaries of the Grand Staircase-Escalante Monument, created by President Clinton in 1996.

"We’re happy to see an administration finally taking action to resolve the many abuses of the Antiquities Act," Block told E&E News via email.

Herbert’s office did not respond to a request for comment on the planned order, but the governor’s public schedule shows he will be in Washington on Wednesday.

Bishop, a vocal critic of Obama’s frequent use of the Antiquities Act — the Democratic president issued protections for more lands and waters than any other president — has asserted that Trump could use the law to eliminate a monument’s status.

But it remains to be seen whether Trump would attempt to do so. While past presidents have reduced the size of existing monuments, no commander in chief has ever attempted to undo the actions of his predecessors.

Conservationists assert that if Trump were to strike down, or even diminish, a monument, it would likely prompt a legal challenge. But conservative legal scholars assert that Trump could in fact use the Antiquities Act in the way Bishop has suggested (E&E News PM, March 29).

Still, Utah Sen. Orrin Hatch (R) praised the White House’s planned action while reasserting his own vow to roll back "the egregious abuse of the Antiquities Act."

"As part of this commitment, I have leveraged all of my influence — from private meetings in the Oval Office in the President’s first week in office to my latest trip to Bears Ears this week — to ensure that this issue is a priority on the President’s agenda," Hatch said in a statement. "I am grateful that the President has demonstrated his commitment to work with me on this vitally important issue and deliver real results for the Utahns most affected by these massive federal land grabs."

While Congress itself can act to eliminate a monument, it has done so fewer than a dozen times since the law’s creation, more often opting to convert areas to national parks.

Center for Biological Diversity Public Lands Director Randi Spivak rebutted Hatch’s criticism of the national monuments in his state, noting that the federal lands in question were given to the government when Utah joined the union.

"This is not a land grab. They’re already owned by the American people," she said, and later added of the White House’s expected executive order: "This is like President Trump is declaring war on America’s public lands. This is nothing more than satiating the greed of industry and blatantly dismissing Native Americans, Utahans and all of America’s wishes."