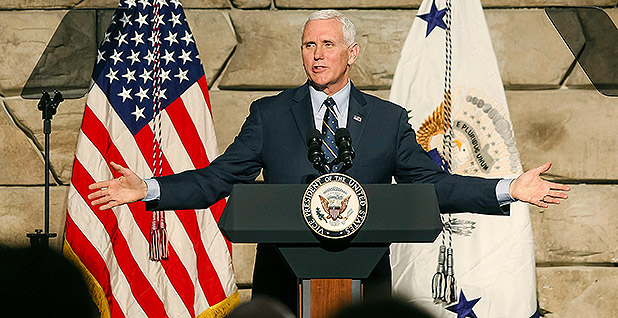 Vice President Mike Pence visited Foster Supply Inc. on Saturday in Scott Depot, W.Va., where he declared the Obama-era "war on coal" to be over. Photo by Sholten Singer/The Herald-Dispatch, courtesy of AP Images.

The White House will release its executive order on the Clean Power Plan tomorrow, triggering President Trump’s promises to dismantle the climate policies of his predecessor.

The twin announcements about signing the executive order and permitting the Keystone XL pipeline, made before the weekend, stand to ease the turbulence of last week by fulfilling two of Trump’s oaths to rural constituents.

"We’ve made tremendous progress on our environment, and we can be both pro-jobs and pro-environment, and the executive order’s going to address the [past] administration’s effort to kill jobs across the country through the Clean Power Plan," Pruitt said.

Vice President Mike Pence set the stage Saturday by telling a crowd in West Virginia, "The war on coal is over."

His remarks sought to reorient the White House toward an issue that served Trump well on the campaign trail, where he at one point wore a coal miner’s hard hat and exulted in the devotion of workers in reflective stripes and coveralls.

"We’re going to bring back jobs," Pence said. "We’re going to get Washington out of the way of energy producers and coal miners — because energy means growth for America, and President Trump digs coal."

Still hurdles ahead before repeal

The White House confirmed yesterday that Trump will visit EPA, an agency for which he expressed disdain before the election, to formally announce the order with Pruitt at his side.

"On Tuesday, President Trump will sign an Energy Independence Executive Order at the EPA to strengthen the nation’s energy security by reducing unnecessary regulatory obstacles that restrict the responsible use of domestic energy resources," White House spokeswoman Kelly Love said in a statement.

"This order will help keep energy and electricity affordable, reliable, and clean in order to boost economic growth and job creation," she said.

Sources have told E&E News that the order would begin the long process of unwinding the Clean Power Plan by requiring Pruitt to review the program, which cuts carbon emissions from existing power plants 32 percent by 2030. It also orders the Department of Justice to ask the U.S. Court of Appeals for the District of Columbia Circuit to abruptly freeze the legal challenge against the Clean Power Plan, effectively ending the government’s defense of the carbon program.

The order itself does not have legal force to repeal the Clean Power Plan, but it does send a signal to EPA to begin the process of rulemaking and public comment necessary to rescind it. The administration would then have to prove that the repeal was evidence-based and not arbitrary, said Steve Silverman, a former EPA attorney in the Office of General Counsel.

"The most immediate practical effect would be on pending litigation," he said, referring to challenges to the Clean Power Plan in the U.S. Court of Appeals for the District of Columbia Circuit (Climatewire, March 9).

"What they would ask the court to do is to put the litigation on ice while the administration takes action," said Silverman.

While the court doesn’t have to agree, it likely will side with the administration on pausing the litigation, he said.

‘States can make a difference,’ but how much?

Agency efforts to terminate the Clean Power Plan could also be hindered if Congress follows through with Trump’s proposed 31 percent cut to EPA’s budget.

"If EPA is going to continue budget cuts, they aren’t going to be able to do a new rulemaking process," said Kenneth Gillingham, an assistant economics professor at Yale University and a former senior economist on the White House Council of Economic Advisers under President Obama.

The "bare minimum" the administration could do to address the Clean Power Plan would be to simply repeal it, without replacing the climate rule with something else. In this case, the administration could take away funding for Clean Power Plan implementation in states but would still have to have funds to address court challenges to the rule’s repeal, he said.

Taking away the Clean Power Plan would put the initiative back in the hands of states that want to address climate change, Gillingham added.

"States can make a difference, but not the kind of difference the federal government can make," he said.

The executive order has been expected for several weeks, since Pruitt first took the helm at EPA. Last week, White House spokesman Sean Spicer denied that it had been delayed and declined to comment on any details it might include (E&E News PM, March 22).

While environmental groups have challenged a repeal as an assault on climate action, Pruitt told "This Week" host George Stephanopoulos that the executive order would help bring back coal and manufacturing jobs to the United States and would also help the country reduce the need for energy sources from abroad.

Pruitt added that technological innovations in the coal and natural gas sectors were largely responsible for recent reductions in the United States’ CO2 emissions. He cited horizontal drilling for extracting natural gas as an example but did not cite any coal-related technologies.

Pruitt: Paris was a ‘bad deal’

Government studies have shown that canceling the Clean Power Plan would have minimal benefits to mining jobs in some regions. Meanwhile, natural gas production in the United States has surged following advances in hydraulic fracturing. Power companies have lowered their carbon footprints by switching away from coal and toward natural gas and renewable power. Technologies to cut carbon output for coal plants, however, are not widely in use.

Pruitt called the Obama administration "anti-fossil fuel" and said rolling back the Clean Power Plan would help to reduce electricity rates for consumers.

When questioned whether the move would affect the United States’ ability to meet its commitments under the Paris Agreement, Pruitt said the Clean Power Plan was not "tethered" to the accords. He called the 2015 negotiations on climate change a "bad deal" since major polluters China and India do not have to take steps to reduce pollution until 2030. Instead, he said the United States should act within the framework of the Clean Air Act.

The EPA administrator did not answer repeated questions from Stephanopoulos on whether he would continue to allow California to maintain its waiver under the Clean Air Act to enact stricter fuel efficiency standards on automobiles than the rest of the country. Pruitt said the president would re-evaluate the corporate average fuel economy (CAFE) standards in 2018. He said that the public did not want to buy the cars that meet the higher efficiency standards and that continuing to manufacture them is "counter-helpful" to the environment.

"What this CAFE standards combined with the Clean Power Plan and the executive order sends a message to the American people that we’re going to do what we can to make sure we produce jobs and growth while also being sensitive to the environment, and making sure that we introduce common sense back into the discussion," he said.