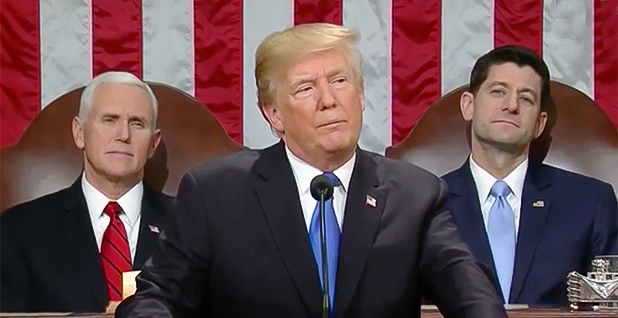 President Trump will renew his call for major infrastructure legislation during tomorrow’s State of the Union address, as talks get underway among key House and Senate lawmakers from both parties.

Infrastructure will be one of five areas in which the president will urge Congress to work on with him during the address, the theme of which is "choosing greatness," a senior administration official told reporters in a Friday conference call previewing the speech.

"He will ask Congress to produce an infrastructure package that delivers substantial investments in vital national infrastructure projects," said the White House official.

Trump is likely to emphasize his administration’s efforts to curb regulations, but Friday’s call did not offer any clues as to whether the president will talk about environmental or energy policy tomorrow.

The senior official said the president will use the address to "cast an inspiring vision of American greatness."

"He will outline a policy agenda that both parties can rally behind to achieve this vision," said the official.

"The president will express confidence in this hopeful future and encourage Congress to reject the politics of resistance and retribution and instead adopt a spirit of cooperation and compromise so we can achieve it."

In addition to infrastructure, the speech will focus on immigration, trade, prescription drug costs and protecting national security, the official said.

Trump will urge Congress to replace the North American Free Trade Agreement with the U.S.-Mexico-Canada Agreement,
while also handing him new powers to impose tariffs.

The president is likely in for a skeptical reception from Democrats and their guests for the prime-time address.

Rep. Dan Kildee (D-Mich.)
has invited Cathy Wusterbarth
of Oscoda,
Mich., an advocate for addressing contamination by toxic per- and polyfluoroalkyl substances (PFAS) found in the city’s water.

The White House is expected to announce its own guests later today.

While Congress last year passed a bipartisan water infrastructure package that Trump signed, the broader infrastructure push never materialized as lawmakers shied away from the tough work of funding the measure.

Key lawmakers are determined to avoid a repeat of last year, already huddling to map out a strategy and launching hearings this week (see related story).

House Transportation and Infrastructure Chairman Peter DeFazio (D-Ore.)
said he hopes the president will lay out a forceful case for infrastructure, a frequent topic during Trump’s presidential campaign that became a punchline metaphor for White House policy dysfunction during the first half of his term.

"I hope that he dwells on it a bit," DeFazio told E&E News on Friday. "We will need support from the White House if we’re going to do a major, longer-term bill. And it’s going to require real federal investment, real federal partnership."

He noted "mixed messages" from the White House since Trump called for infrastructure legislation before Congress last year.

"The president upped the ante in the State of the Union last year, but there was no follow-through from his staff," DeFazio said.

He added that "nobody liked" the White House infrastructure proposal led by DJ Gribbin,
who left the administration last spring. That plan relied largely on public-private partnerships and "massive tolling everywhere," said DeFazio.

Rep. Sam Graves (R-Mo.),
the ranking member on T&I, said he expects Trump to "reaffirm his commitment to infrastructure" during the speech, an aide said last week.

"This will be very symbolic and send the message that he is ready to get something done," said the aide, who noted that Graves is working closely with the administration to incorporate some its priorities in the package.

Senate Environment and Public Works Chairman John Barrasso (R-Wyo.),
who met with DeFazio last week to talk about infrastructure, said the two had a "very good" discussion during his visit to the House chairman’s office.

Barrasso said he expects to have the White House’s backing for whatever Congress produces. "It’s a key issue for him," he said of Trump.

It’s unclear whether Trump will outline specific pay-fors during tomorrow’s address, but Barrasso said he is optimistic that Congress and the White House can reach a deal on funding.

"We’re going to have to, we need to pay for this," he said. "Paying is part of it; the other part is just making it easier to be able to build things faster, smarter, better, cheaper, and so much of that is the regulatory component of that."

Sen. Jim Inhofe (R-Okla.), who sits on the EPW Committee, noted that infrastructure was one of Trump’s frequent talking points on the campaign trail, and despite initial enthusiasm, the plan the White House rolled out last year was stymied by myriad controversies and other policy issues.

"A lot of people on infrastructure, as you guys know, had anticipated something long before now," Inhofe told reporters last week. "We did not anticipate all the trauma that we would be competing with."

Democrats and their supporters off Capitol Hill are already looking to gather support for their own vision for infrastructure legislation.

They’re hoping it’s an early opportunity to address climate change and promote clean energy in a bill that may have a shot at making it through the likes of Inhofe and the Republican Senate and getting Trump’s signature.

In a December letter to the White House, Senate Minority Leader Chuck Schumer (D-N.Y.)
offered a litmus test for any infrastructure bill, including "funding to transition to a clean energy economy and mitigate the risks that the United States is already facing due to climate change" (E&E Daily, Dec. 7).

And last week, the liberal Center for American Progress
put together a report floating ideas for an infrastructure plan focused on reducing greenhouse gas emissions and helping cities prepare for climate change.

"Historically, infrastructure and protection of the environment have been treated as separate, with the former a foundational element of economic production and the latter an amenity — something nice to have but incidental to the economy and economic issues of wages, growth, and competitiveness," the group wrote.

"The increasing severity and frequency of catastrophic wildfires, droughts, floods, and hurricanes have laid waste to this false dichotomy. In truth, the economy and the environment are intricately linked and mutually reinforcing."

To address a wide variety of needs — including surface transportation and water and energy infrastructure — the group suggests spending an additional $1 trillion above the baseline, when adjusted for inflation, during the next 10 years.