Trump tries to quell climate attention. It rises instead 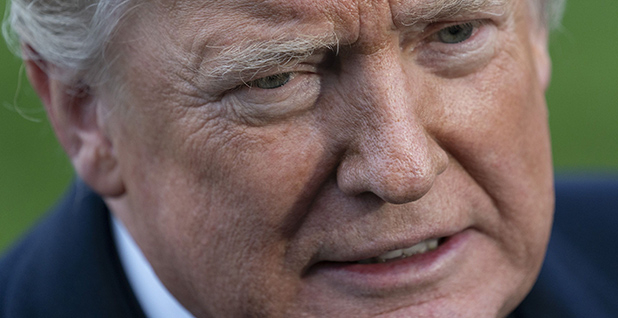 The Trump administration’s rebuke of a 1,700-page climate report produced by 13 federal agencies has fueled a week of media coverage that shows little sign of dying down.

The National Climate Assessment was dropped on Black Friday, an obscure time that was widely perceived as an attempt to bury the report. Instead, it’s been given extra life.

Climate scientists have appeared on national and international television shows for days, newspapers continue to pump out headlines, and the president himself is being questioned about it. Administration officials have said that the report is fraudulent or exaggerated, which produces another wave of fact-checking.

Some Republicans have reacted by showing support for the report, including Sen. Thom Tillis of North Carolina. That shows some members of the party are embarrassed by the week of denials, said Bob Inglis, a former Republican congressman who is now executive director of republicEn, which works to get conservatives to act on climate policy.

"Trump is clearly becoming the climate disputer in chief and looking like a pretty silly caricature, where he is standing on his superstition about climate when the scientists are telling us about the data," Inglis said. "I think the adults in the room, like Sen. Tillis, are doing what you would expect a responsible lawmaker to do, which is pay attention to the scientists who are presenting data and to turn away from some sort of superstitious disbelief of climate science."

On Tuesday, White House press secretary Sarah Huckabee Sanders said the report was "not based on facts." President Trump has said he did not believe the scientific assessment. Then he elaborated on his views.

"One of the problems that a lot of people like myself — we have very high levels of intelligence, but we’re not necessarily such believers," he told The Washington Post in an Oval Office interview. "You look at our air and our water, and it’s right now at a record clean."

Trump then repeated a claim that is popular among those who deny climate science: that scientists used to warn about global cooling in the 1970s. Early in his presidency, Trump was shown a fake Time magazine cover that features a supposed article about global cooling. In reality, scientists have known since the 19th century that adding carbon dioxide into the atmosphere will raise the Earth’s temperatures.

Administration officials have said that the report is based on "extreme scenarios" and faulty assumptions and that it was not transparent. Trump’s allies have said that climate scientists are getting rich off the report. Both of those points have been refuted.

The report includes lower- and higher-emissions scenarios, not just extreme projections, scientists have pointed out. Researchers did not receive compensation for writing the report.

Yesterday, acting EPA Administrator Andrew Wheeler said the report was "interesting." He then questioned the climate models that led to its assumptions.

"We need to take a look at the modeling that is used for the next assessment," he said at an event hosted by The Washington Post.

The administration’s response has kept climate scientists busy. Katharine Hayhoe, an atmospheric scientist at Texas Tech University and one of the report’s leading authors, said she has spent every day since its release fielding media questions. She attributes the attention to the White House’s response as well as to the specificity of the latest volume, which shows regional effects of climate change, she said.

The more the administration talks about the report, or tries to downplay it, the more news it gets, she said. That, in turn, has more people paying attention to its findings.

"For the majority of people who are listening, this coverage is positive, because it reinforces the messages again and again that yes, the science is certain," Hayhoe said. "It reinforces the message that scientists agree, and also it directly attacks what I see as the most dangerous message, which is that it doesn’t matter to me."

The idea that the administration tried to hide the report appears to be fueling coverage, said Robert Kopp, a lead author on the first volume of the assessment and director of the Rutgers University Institute of Earth, Ocean and Atmospheric Sciences. The assessment, he said, is inherently difficult to report on because it’s so detailed and the overarching messages are all things that have received coverage in the past.

One reason the administration is struggling with its response to the report is because it lacks climate science experts, said Marlo Lewis, a senior fellow at the conservative Competitive Enterprise Institute, which has attacked established climate science. He said any response to the report will bring a new wave of critical coverage. Instead, he said, the White House should promote energy generation.

"What would help in the long run is an in-house capability to make the moral, economic, and scientific case for free-market energy," Lewis wrote in an email. "That could help Trump immensely with his base, party, and the general public, especially if the economy remains strong over the next two years."

The administration didn’t have an adequate response to the report because "they were surprised by it," said Steve Koonin, a New York University physicist who worked with former EPA Administrator Scott Pruitt to formulate a climate science debate. Koonin criticized some of the report’s economic conclusions in a Wall Street Journal opinion piece this week, saying that they were overblown. Yesterday, he said one reason the administration was caught off guard is because it hasn’t adequately staffed the Office of Science and Technology Policy.

"They just have to pay much more attention to what these reports say and ask the hard questions of people writing the reports," said Koonin, "the kind of questions that any serious executive would ask of people who are doing analysis for them. We know how to do this in the national security space; why don’t we do it here?"