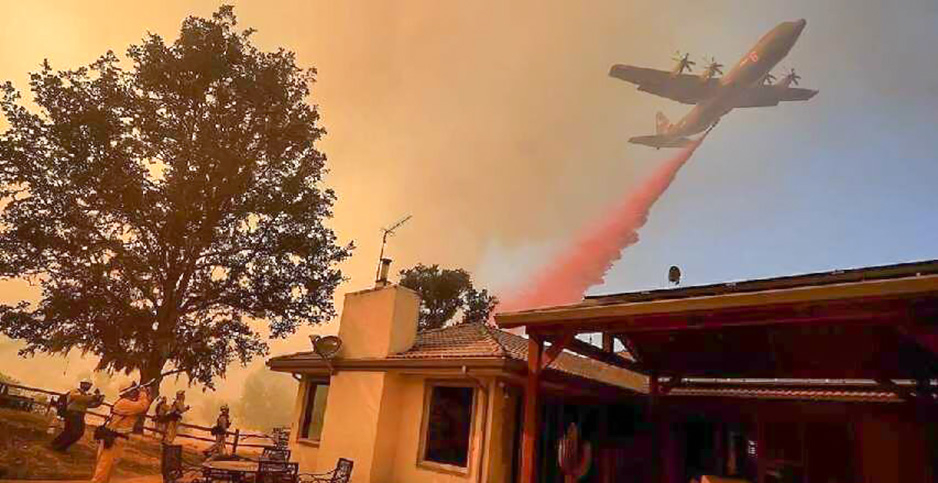 The Commerce Department yesterday said it’s following Trump’s directions to bend environmental protections so more water can go to wildfire suppression, even though firefighters say they have more than they need.

Some experts and advocates said the directive to temporarily bypass the Endangered Species Act is political theater. It’s unlikely to help douse the historic fires in California, and it probably won’t threaten vulnerable species, either. But it could lend weight to Trump’s version of events.

"It’s been a very tough situation taking place in California for a number of years," Trump said yesterday, before the directive was announced. "And we’re going to have to have some meetings about it, because there are reasons and there are things you can do to mitigate what’s happening."

Commerce Secretary Wilbur Ross yesterday ordered NOAA Fisheries to allow water use beyond the normal limits of the Endangered Species Act, which reserves water to support salmon, delta smelt and other fish that have suffered from California’s intense years of drought.

"Consistent with the emergency consultation provisions under the ESA, Federal agencies may use any water as necessary to protect life and property in the affected areas," the six-sentence directive said.

In other words, the law already allows the government to prioritize emergency response over ESA consultation, which is the process of ensuring actions don’t harm protected species or their critical habitat. Ross is directing federal officials to "make clear" that fire suppression trumps wildlife protections.

"We have no issue with water whatsoever operationally in any of our incidents statewide," Cal Fire Deputy Director Mike Mohler told E&E News yesterday, adding that as a natural resource management agency it has navigated federal and state environmental rules smoothly.

There’s another part of the directive — "NOAA will facilitate the use of water for this emergency" — that suggests it’s innocuous, said Brent Haddad, a professor at the University of California, Santa Cruz, who specializes in water policy.

"If that’s all it is, then it’s fine and it won’t change much because lack of water’s not an issue," he said. "If this is a broader statement about redirecting water supply, then it is a federal water grab, [but] it doesn’t sound like that’s what it is. … It seems like this is a nothingburger."

He said that is because the directive is limited to the current fire, not those in the future.

Taken together, those factors mean the directive is more public relations than policy, said Randi Spivak, director of the Center for Biological Diversity’s public lands program.

"It’s nothing more than an effort to legitimize Trump’s completely false tweet," she said.

‘Water is not the issue here — climate change is’

"California wildfires are being magnified & made so much worse by the bad environmental laws which aren’t allowing massive amount of readily available water to be properly utilized. It is being diverted into the Pacific Ocean," Trump tweeted Sunday.

He reiterated that Monday: "Governor Jerry Brown must allow the Free Flow of the vast amounts of water coming from the North and foolishly being diverted into the Pacific Ocean. Can be used for fires, farming and everything else."

A burning landscape is usually contained through chemical retardants and fire breaks. Water evaporates if too much time elapses between applications. That short window means firefighters often focus water on specific areas where there’s easy access to more, rather than use it to contain a large perimeter, said Eric Kennedy, a professor of disaster and emergency management at York University.

"Water is all about location and logistics," he said. "It’s unclear how [Trump’s action] relates to the day-to-day, on-the-ground needs of the firefighters."

Before the tweets became policy, the administration’s friends and foes interpreted it as Trump flattering the California farmers who want more water for irrigation and less for natural ecosystems.

Now that Commerce has enacted it, environmentalists are framing it as a window into Trump’s dislike of regulations, even if they protect threatened animals.

Kate Poole, senior director of the Natural Resources Defense Council’s water program, called the directive a "smokescreen" to weaken the protections implemented by the government’s own scientists.

"It’s almost like the extinction of these creatures is their real goal, so that they no longer have to leave any water in rivers, but can divert it all to corporate agribusiness," she said in a statement.

Others emphasized how the blazes — including the largest in state history, the Mendocino Complex Fire — fit into the trend of rising temperatures.

"As locals and experts have pointed out, water is not the issue here — climate change is. Yet instead of addressing or even acknowledging climate change’s role in exacerbating wildfires, the administration is using fire as cover to serve special interests," Kirin Kennedy, the Sierra Club’s associate legislative director for lands and wildlife, said in a statement.

After the tweets and before the directive, Interior Secretary Ryan Zinke outlined his vision of what’s wrong with wildfire policy in a USA Today op-ed.

He blamed "radical environmentalists" for using "frivolous litigation" to stall efforts to clear dead and vulnerable trees from fire-prone areas.

Zinke also nodded at the worsening conditions across the West.

"The fires are burning hotter and more intense, due in part to hot and dry weather and in part to the fuels that overload our forests," Zinke wrote.

Asked whether that was a reference to climate change, Interior spokeswoman Heather Swift said: "The secretary directly addressed the issue of hotter and drier weather conditions in the opening of the piece."