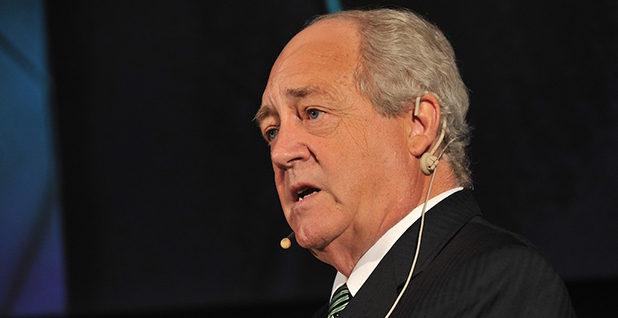 President Trump is dismissing climate science in the same way he attacks news reports that don’t portray him in a flattering light: by calling it "fake."

In a tweet yesterday, Trump quoted something Patrick Moore, who has long attacked climate science using his credentials as a Greenpeace activist in the early 1970s, said on the "Fox & Friends" morning show.

"Patrick Moore, co-founder of Greenpeace: ‘The whole climate crisis is not only Fake News, it’s Fake Science. There is no climate crisis, there’s weather and climate all around the world, and in fact carbon dioxide is the main building block of all life.’ @foxandfriends Wow!" Trump tweeted.

Trump has rejected climate science and regularly conflates weather and climate. He has brushed off a series of reports endorsed by his own administration that show humans are warming the planet at an unprecedented pace through the burning of fossil fuels.

The new tweet, which came a day after the White House proposed cutting hundreds of millions of dollars in climate research, endorses a view that’s far outside mainstream climate science.

Greenpeace issued a statement yesterday distancing itself from Moore, saying he is not a co-founder of the environmental group and does not represent its views in any way. The group pointed to Moore’s work for the nuclear energy industry and a number of polluting industries.

"Patrick Moore was not a co-founder of Greenpeace," the group wrote in a statement. "He does not represent Greenpeace. He is a paid lobbyist, not an independent source."

Moore’s currently on the board of directors of the CO2 Coalition, which promotes the notion that generating more carbon dioxide by burning fossil fuels is beneficial to humanity.

The co-founder of the CO2 Coalition is William Happer, an emeritus physics professor at Princeton University, who is now on the National Security Council and is organizing an "adversarial" review of climate science at the White House. Happer has pushed for members of the CO2 Coalition — which counts among its funders the Mercer family, a major donor to the Trump campaign, as well as conservative foundations and energy companies — to actively participate in the process (Climatewire, Feb. 28).

Moore wrote on Twitter yesterday that he had traveled to Washington for a CO2 Coalition meeting and had asked the administration to roll back EPA’s endangerment finding, which is the scientific underpinning for the agency’s climate rules.

"Thanks President Trump," he wrote. "I am in DC for a meeting of the CO2 Coalition founded by William Happer, who I admire greatly. CO2 is entirely beneficial. The EPA finding that CO2 is pollution must be reversed."

Undoing the Obama-era endangerment finding would mean overcoming a mountain of peer-reviewed climate science from some of the world’s top science agencies. It’s long been a goal of conservative groups, but the Trump administration has not taken any action.

In an interview with E&E News, Moore expanded on his tweet and said he traveled to D.C. to talk about the future direction of the CO2 Coalition, which will focus on "reaching out to the general public with the good news of CO2." The group recently hired its first full-time executive director, as well as a staff member dedicated to getting its members on more television, radio and online interviews.

Moore said Trump’s tweet boosts the visibility for his work and that of the CO2 Coalition. He said he was particularly pleased the president highlighted his use of the term "fake science."

Climate change is "not something that we should be hysterical about; it’s become too much like some kind of cult religion," he said. "There is nothing happening today that is worthy of hysteria or alarmism or crisis. It’s fake science, and it’s time that was called, and it’s got to end. Billions and billions of dollars are being wasted on this."

NASA and NOAA — some of the world’s pre-eminent science agencies — have closely tracked humanity’s warming of the planet, showing that it will have increasingly devastating effects for civilization, as well as plants and animals. Recent polls have shown increasing public concern about climate change, including among conservative Republicans.

But Judith Curry, a professor at the Georgia Institute of Technology’s School of Earth and Atmospheric Sciences whom Moore calls "one of the calmest and most intelligent voices on climate realism today," said his claims are so far outside climate science that it reflects poorly on the White House’s effort to review the issue.

Curry is among the small number of outside researchers who have been considered for the White House review. She’s also one of the few climate skeptics who has legitimate academic credentials and has published dozens of peer-reviewed papers in the field in mainstream science journals.

"This does not help the more serious issue of trying to evaluate this whole thing in a more rigorous way," she said.