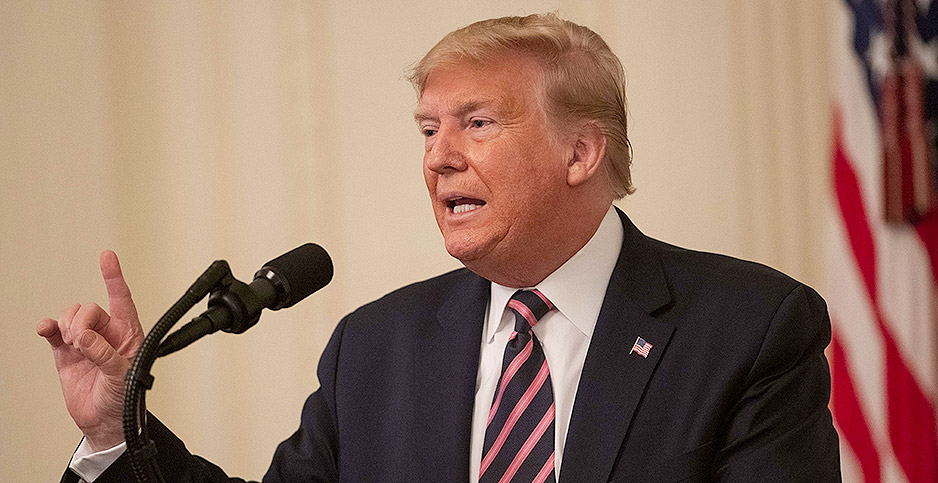 President Trump at the White House yesterday before tweeting a policy shift on the Yucca Mountain nuclear waste repository in Nevada. CHINE NOUVELLE/SIPA/Newscom

President Trump yesterday signaled his administration will reverse course and abandon the controversial Yucca Mountain nuclear waste repository in Nevada — a move that could pay off politically in the Silver State.

In a tweet last night, Trump said his administration would instead look for "innovative approaches" to dealing with more than 80,000 metric tons of commercial nuclear waste spread across the country at reactor sites.

"Nevada, I hear you on Yucca Mountain and my Administration will RESPECT you!" he tweeted.

"Congress and previous Administrations have long failed to find lasting solutions — my Administration is committed to exploring innovative approaches — I’m confident we can get it done!"

Trump’s pivot from Yucca — a move that would align more with the Obama administration and fly in the face of a Republican push for the site to be completed — could be a political play in a swing state ahead of the November elections. Shortly after tweeting, Trump announced he would hold a political rally in Las Vegas on Feb. 18 to highlight his administration’s commitments.

Under Trump, the Department of Energy has included funding for Yucca Mountain as part of its past three budget requests. Congress, however, has not funded the project over concerns from Nevada lawmakers about its safety and radiation exposure to residents of the state.

DOE declined to comment on the tweet, instead referring comment to the White House. A senior administration confirmed the president’s 2021 budget will not have funding for the licensing of Yucca Mountain in it.

A report in the Las Vegas Review-Journal, citing an unnamed administration official, indicated the impending budget request would include a proposal for funds for DOE to launch an interagency task force to work with states to find a new path forward.

In November, Energy Secretary Dan Brouillette said at his confirmation hearing in front of the Senate Energy and Natural Resources Committee that he would continue to enforce the law — the Nuclear Waste Policy Act identifies Yucca Mountain as the site for the nation’s nuclear waste — though without new funding there was little he could do.

"At the moment, I can give you the assurance that in the near term as secretary, until the Congress makes a decision on Yucca Mountain, nothing will happen at the Department of Energy," Brouillette told Sen. Catherine Cortez Masto (D-Nev.) about the future of Yucca Mountain.

Located about 100 miles northwest of Las Vegas, Yucca Mountain has become a decadeslong battle between the state of Nevada and the federal government.

Trump’s tweet comes nearly 10 years after the Obama administration formally moved to shutter the Yucca Mountain site by pulling its license application from a Nuclear Regulatory Commission licensing review. The administration had deemed the site "unworkable" due to intense state opposition to its use.

In the intervening decade, a federal court determined that the NRC must continue the licensing review so long as it has appropriations to do so. That has left the site in limbo, lacking the funds to move forward but not yet dead.

A blue ribbon commission convened by the Obama administration endorsed consolidated interim storage sites as a more practical way to begin collecting the waste. Two sites — one in West Texas and one in southeastern New Mexico — have filed applications with the NRC to act as interim sites.

The Trump administration has endorsed interim sites while it also pushed for Yucca Mountain. Assistant Secretary of Nuclear Energy Rita Baranwal has previously said she also supports looking at ways to recycle the waste and reusing it in advanced reactors.

Trump’s move may be motivated as much by political calculations as concerns for public safety or state consent.

Earlier yesterday, during a winding victory speech following his acquittal of impeachment charges, Trump mentioned Nevada as a place he feels he could carry in the 2020 election. He lost the state to Hillary Clinton in 2016, although it is widely considered a swing state in the upcoming election.

All the Democratic nominees for president oppose Yucca Mountain, although one contender, Andrew Yang, has not taken a firm Yucca Mountain stance. It’s become somewhat of a requirement for presidential hopefuls, as Nevada is one of the initial primary states in the race.

Lawmakers from Nevada largely celebrated Trump’s tweet and promised to work with the Trump administration to find alternative solutions away from Yucca Mountain.

"I look forward to working with you on this critical issue for Nevada and ensuring your budget doesn’t include any funding to restart the failed Yucca Mountain project that a majority of Nevadans reject, regardless of party," Cortez Masto tweeted in response.

"They say if you can’t beat them, join them. President Trump tried to shove nuclear waste at Yucca Mountain down our throats for three years. We beat him badly and he knows it," tweeted Rep. Dina Titus (D-Nev.).

The fiscal 2020 appropriations bill has already looked to advance some of those "innovative approaches" pushed for by Trump.

That funding includes $87 million for DOE "to continue [its] work to identify further processing of [nuclear] material and also think about what to do in the future" with regard to finding a permanent disposal strategy, according to Rep. Marcy Kaptur (D-Ohio) last year.

But even with the new commitment, some in Nevada are still skeptical about Trump’s decision.

"Yucca Mountain is dead and will remain dead," former Sen. Harry Reid (D-Nev.) tweeted. "This has been true for a long, long time. Donald Trump finally realizing this, changing his position and trying to take credit for its demise will not change that fact. I’m glad he has finally seen the light."