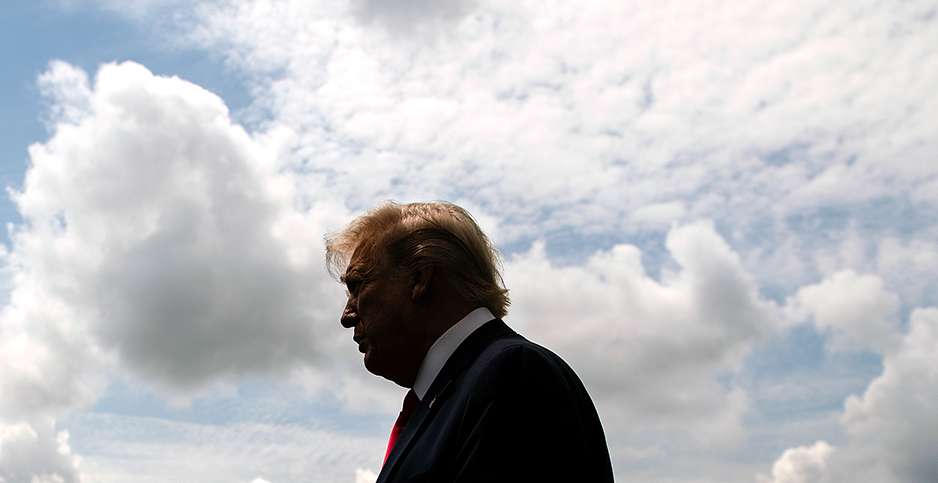 President Trump announced new aluminum tariffs yesterday that could hurt the energy industry, even as he sought to paint Democratic challenger Joe Biden as a threat to "our kind of energy."

At a Whirlpool Corp. plant in Ohio, Trump said he would slap a 10% tariff on aluminum products imported from Canada, saying the country "was taking advantage of us as usual." He cast the move as a way to protect the U.S. industry from an import "surge."

The announcement prompted pushback from some conservatives and the U.S. Chamber of Commerce, which called the tariffs a "step in the wrong decision" and urged the administration to reconsider, charging it would raise costs for American manufacturers and spark retaliation against U.S. exports.

Nick Loris, who monitors energy and regulations for the conservative Heritage Foundation, called the move "another cost that will harm everything from the oil and gas industry to wind, solar and storage."

Others said new fees would add to the challenges facing renewables already struggling in the pandemic.

John Smirnow, vice president of marketing strategy and general counsel at the Solar Energy Industries Association, said the tariffs "are likely to increase prices for aluminum products used in the solar industry, which is not good given our current COVID-related challenges." But he added that although a "handful" of companies may be particularly affected, the association did not expect a significant effect across the industry.

Trump’s remarks were part of a wide-ranging campaign-style speech that touched on everything from hydraulic fracturing to lightbulb standards.

Ohio Gov. Mike DeWine (R), who was scheduled to greet Trump on the tarmac at an Ohio airport, tested positive for COVID-19 as part of the White House screening protocol and skipped the event.

He later announced that a second, more sensitive test was run and he came back negative. He said he planned to be tested again tomorrow. A Texas congressional candidate last week tested positive for the disease ahead of Trump’s visit to Odessa and Midland, Texas, as did Rep. Louie Gohmert (R-Texas), who had been scheduled to fly with Trump.

Before arriving at the factory, Trump told a crowd at the airport — in an appearance that the White House billed as "Remarks on Economic Prosperity" — that Biden, a practicing Catholic, is "against God, he’s against guns, he’s against energy, our kind of energy."

Trump, who last week campaigned at a Texas oil rig, added that Democrats are "against oil and gas."

In a statement, Biden called Trump’s attack on his faith "shameful" and said his religious beliefs are "the bedrock foundation of my life."

"It’s beneath the office he holds and it’s beneath the dignity the American people so rightly expect and deserve from their leaders," Biden said. "As I’ve said so many times before, we’re in the battle for the soul of our nation, and President Trump’s decision today to profane God and to smear my faith in a political attack is a stark reminder of what the stakes of this fight truly are."

Trump also told the crowd at the plant that he was "doing a hell of a good job for the unions," reengaging in criticism of the head of the Tennessee Valley Authority and the federal agency’s decision to outsource 100 technology jobs.

"This is a very big utility run by a man that gets $8 million a year," Trump said. "Would anybody in this room like that job? $8 million."

He said he had told the chairman of the board, "You’re fired, and the firings will continue unless the layoffs are reversed and the American workers are rehired."

"We had a positive meeting with the White House and wholeheartedly agree with the administration’s direction on jobs," Ryder said. He called TVA’s restructuring process "faulty."

Lyash added, "We were wrong in not fully understanding the impact on our employees, especially during the pandemic."

Lyash earlier in the week had defended his salary, noting that TVA is the nation’s largest public power utility and that his salary is in the bottom quartile of peer utility CEOs.

At other points, Trump returned to frequent campaign targets, including Rep. Alexandria Ocasio-Cortez (D-N.Y.), who spearheaded the Green New Deal in Congress. He said that the "radical left-wing movement" wants to "ban fracking, which will demolish your state."

"Now, when you actually go into a new home and pay a lot of money, you turn on a faucet, and water actually comes out. Isn’t that nice?" he said.

The White House has pushed to roll back regulations, but Trump’s remarks on the water standards — first voiced last December — at the time baffled EPA staffers working to set standards for commodes and other plumbing fixtures (Greenwire, Feb. 28).

The president repeated claims yesterday that the less-efficient lightbulbs that his administration allowed to remain on the market are selling briskly, although critics say consumers prefer more energy-efficient bulbs. He incorrectly suggested that the new bulbs are considered "hazardous waste." In December, the administration issued a final rule that blocked the phaseout of traditional incandescent bulbs (Energywire, Dec. 23, 2019).

Energy efficiency experts have said Trump may be confusing the popular LEDs with the old compact fluorescent lamp, or CFL, which they supplanted and contained low levels of mercury. General Electric Co. decided to stop manufacturing them in 2016.

After his extended riff on the consumer items, Trump pushed back on critics who "scoff" and say "Who cares about that stuff?"