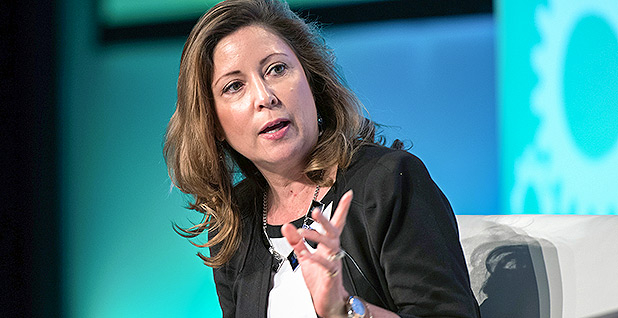 The third in a series. Click here for part one and here for the second part.

As the next chief lobbyist for U.S. nuclear power, Maria Korsnick had just crafted a plan to win support in Washington for a group of reactors at risk of early shutdown because they aren’t making it economically.

The strategy: Paint nuclear green. Reactors would be rebranded as an essential source of carbon-free power for states trying to meet emissions limits under U.S. EPA’s Clean Power Plan.

"Fundamentally, I believe we need to recognize the environmental kindness that nuclear brings," Korsnick told reporters last month. In January, the former executive for Constellation Energy Nuclear Group takes over as president of the Nuclear Energy Institute, the industry’s leading advocacy group.

That was the plan.

Then came Donald Trump’s presidential election victory and with it the promised termination of the Clean Power Plan, stripping away the rationale on which the nuclear industry pinned its hopes for help.

NEI has quickly pivoted to get in sync with the Trump campaign’s theme of expanding infrastructure spending and job creation. Korsnick told E&ETV last week that "the value proposition is still there. Jobs, it’s good for the economy," she said, plugging the employment impact of nuclear plants in their local communities (E&ETV’s OnPoint, Nov. 15).

The challenge to the nuclear power industry remains the same. Without federal or state financial support that rewards reactors’ zero-carbon electricity, a dozen or more reactors may shut down, unable to compete with generators burning cheap national gas, Korsnick and her peers assert.

Further out in her pre-election plan were hopes for a congressionally approved clean energy tax credit for nuclear plants to match solar and wind energy tax benefits, and possible new rulings from the Federal Energy Regulatory Commission that would add zero-carbon credits to reactor owners’ market revenues.

"Ultimately, I think the answer is through FERC, but I’ll be honest, I believe there’s going to have to be a bridge before we actually get to the longer-term answer, and I think that bridge happens to be at the state level. So you’re going to see more focus on state strategies," Korsnick said.

Issues with the N.Y. plan

But a state-by-state approach is subject to a patchwork of state political environments, where nuclear power may be welcome or not, and where linking nuclear power to climate goals may or may not find allies. While the generation of nuclear power is "carbon-free," nuclear fuel production and handling are not.

Korsnick’s model for action at the state level is New York’s zero emissions credit (ZEC) strategy, adopted in August. "We see that as precedent-setting, demonstrating the environmental value that nuclear brings to the table," she said.

The New York plan provides a "climate adder" ÿ an initial charge of $17.48 per megawatt-hour assessed against the state’s utilities that would be paid to the upstate nuclear plants as compensation for their carbon-free power. (The plan excludes the Indian Point Energy Center north of New York City on the Hudson River, which Cuomo wants to close.)

The ZEC calculation hinges at least initially on a controversial regulatory standard developed by the Obama administration called the "social cost of carbon," which calculates the economic benefits to society when lower-carbon output reduces future damages from climate change. The metric is high on the target lists of Trump industry supporters (Greenwire, Nov. 11).

Recent federal court cases "have given FERC broad authority to regulate activities relating to terms and conditions of market operation," according to Joel Eisen, a professor at the University of Richmond School of Law who has written a series of analyses on a possible FERC role in climate policy.

The commission could take advantage of that opening to address the missing compensation that zero-carbon nuclear and renewable generation do not receive now.

The lack of a "carbon price" reflecting long-term damage from power plant carbon emissions "gives polluting generators a competitive advantage in electricity markets and leads to higher levels of fossil fuel use than would otherwise take place," Eisen wrote.

Still, FERC is not an environmental agency, he added, and courts give it limited latitude to directly consider environmental matters in ratemaking action. "FERC has to come up with some rationale such as saying it is necessary for overall system reliability or adequacy to do this sort of thing," Eisen said.

Romany Webb, a fellow at the Sabin Center for Climate Change Law at Columbia University Law School, observed that FERC would be most likely to act on this front in response to a request from a state or region to create a "carbon adder" in wholesale rates. Such a request is most likely to come from New England, she added, where states already have joined in the Regional Greenhouse Gas Initiative, a mandatory program to cut CO2 emissions.

Eisen agreed. "I don’t think FERC could force a nationwide policy on a region without a detailed finding that the resource mix in each region is unworkable" without a carbon price, he said. "I think it is an organic process that comes up from each region."

Outside of New England, it is much harder to find a coalition of states that agree on climate policy, he added.

Some experts question how far FERC could go under the 1935 Federal Power Act to address such issues.

The act, written as an economic regulation statute, has been stretched by FERC over several decades to cover market-based pricing, new technology impacts, and new security and reliability concerns. The act "has weathered these changes, but whether it remains fit for the purpose for the electricity industry in the 21st century is an important question to consider," commented energy attorney and former Energy Deputy Secretary Linda Stuntz at a House Energy and Power Subcommittee hearing.

"FERC can certainly create products that are needed for the stability of the grid and to help markets operate. I don’t know that FERC can create a product and say, ‘We’re going to let you do something just because it is low-carbon,’" Stuntz added in an interview.

Bottom line, FERC could find reasons to provide help to nuclear plants or not based on a climate argument. And after Jan. 20, the two existing vacancies in the five-member commission will be Trump appointees. These selections "are going to be very important for us," NEI’s Korsnick said. "A big deal."