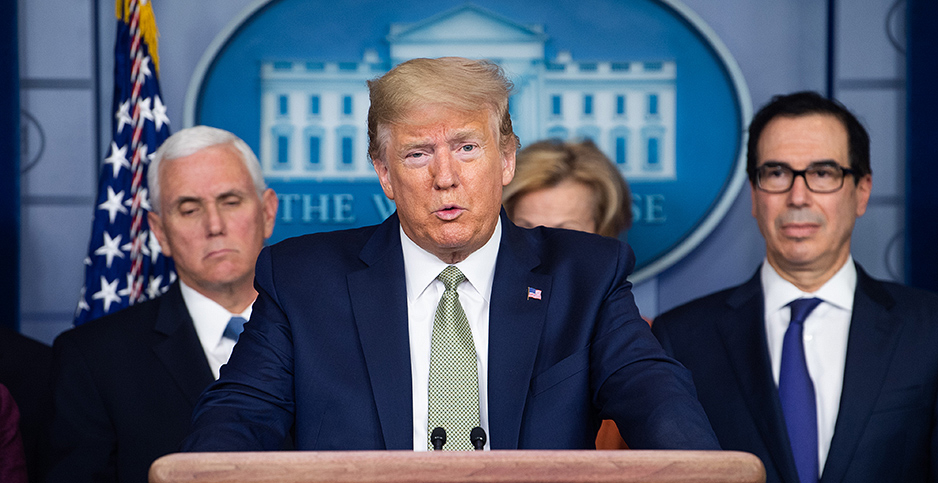 The White House and Senate Republicans are hoping to move quickly to pass a massive aid package to bolster the economy hit hard by the new coronavirus.

"It’s going to be big, and it’s going be bold," President Trump said at an extended press conference today at the White House.

Senate Republicans were set to meet with Treasury Secretary Steven Mnuchin today, where they are expected to begin hashing out details of the package.

Both aid to the hard-hit airline industry and funding for infrastructure projects are among the ideas being considered.

Trump said the airlines would emerge in "good shape" under the proposal but did not confirm figures of perhaps as much as $50 billion in aid to the industry.

The president declined to confirm reports of an $850 billion or even $1 trillion package, but repeatedly stressed that it would be bold and wide-ranging.

He said rather than a payroll tax cut, he was eyeing immediate cash payments to Americans to help stimulate the economy.

Senate Majority Leader Mitch McConnell (R-Ky.) signaled Senate Republicans are on board with the push.

"It is my intention that the Senate will not adjourn until we have passed significant and bold new steps, above and beyond what the House passed, to help our strong nation and our strong underlying economy weather this storm," McConnell said on the floor this morning.

McConnell did not offer a top line or specifics but said it would offer aid to workers and families, help secure the economy with a focus on small businesses, and provide support and resources to health care workers.

As the Senate eyes a broad stimulus, it’s not clear how it will handle legislation the House moved before recessing last week to help workers and small businesses hit hard by the crisis and provide $1 billion to speed up virus testing. One option could be simply to roll it into the larger legislation.

Sen. Mike Rounds (R-S.D.) told reporters in the Capitol today that he expects the Senate to pass the House bill.

"We will review it, and I think we will pass it. But we will also try to do a more substantive bill, as well, a proposal that the House could then review and perhaps pass," Rounds said. "We know that the economic stimulus that we need is going to be far greater than is found within the existing House proposal."

Rounds added, "So the discussions here are not trying to cut it or to change it as much as to be able to expand it to really meet the needs that we see in the immediate future."

Several Senate Democrats called for moving the House bill now as details of the broader plan are also worked out. They also called for more teleworking among Senate staff crafting the bill to prevent the spread of the virus.

"We will need big, bold, urgent federal action to deal with this crisis," said Senate Minority Leader Chuck Schumer (D-N.Y.), who warned against "massive bailouts" for the airlines or other industries and also opposed cuts in the payroll tax.

Schumer outlined his own $750 billion package today that largely focuses on aid to workers and small businesses and on more health care spending. It also would provide funds to small businesses hit hard by a decline in ridership as workers stay home.

The House has not exactly said when it would be back, but may need to return to the Capitol to approve a large Senate-backed plan.

House leaders say they are looking at ways to allow voting that would permit no more than 30 members on the floor at any one time to limit the chances of spreading the virus.