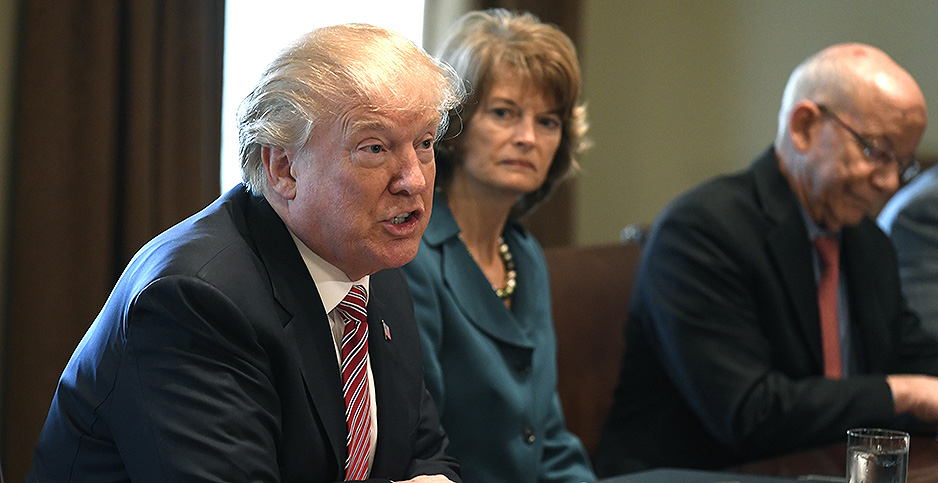 The president took to social media last night vowing to campaign against the Alaska Republican in 2022 after she expressed doubt over supporting him for reelection.

"Few people know where they’ll be in two years from now, but I do, in the Great State of Alaska (which I love) campaigning against Senator Lisa Murkowski," Trump tweeted. "She voted against HealthCare, Justice Kavanaugh, and much else…"

In a follow-up post, Trump noted that it was his signature that opened the Arctic National Wildlife Refuge to drilling in 2017, while setting a low bar to win his support for challenging Murkowski, who is up for reelection in 2022.

"Unrelated, I gave Alaska ANWR, major highways, and more. Get any candidate ready, good or bad, I don’t care, I’m endorsing. If you have a pulse, I’m with you!" he tweeted.

Trump’s tweets came hours after the veteran Republican told reporters she was "struggling" with whether to support the president in November and applauded comments from former Defense Secretary James Mattis, who charged that the president is trying to divide the country (E&E News PM, June 4).

Murkowski’s comments marked a rare public rebuke of Trump by a GOP lawmaker, many of whom are loath to openly criticize the president. It’s not the first time Murkowski has angered the president.

In the run-up to the Senate vote to repeal the Affordable Care Act in 2017, Murkowski received a "hard" phone call from the president seeking to persuade her to vote to overturn "Obamacare" (Greenwire, July 27, 2017).

Then Interior Secretary Ryan Zinke later told Murkowski her health care vote would influence the administration’s policies on resource development in her state, but she joined with Sen. Susan Collins (R-Maine) and the late Sen. John McCain (R-Ariz.) to ultimately uphold the law.

The following year, Murkowski shocked Washington by voting against ending debate on the nomination of Brett Kavanaugh to the U.S. Supreme Court (Greenwire, Oct. 5, 2018).

However, Murkowski delivered a key win for the White House in January, when she voted against summoning more testimony in the president’s impeachment trial, effectively clearing the way for the trial’s conclusion and acquittal (E&E News PM, Jan. 31).

She has not said whether she will run for a fourth full term in 2022 but is term-limited as chairwoman of the Energy and Natural Resources Committee at the end of this year.

She made history in 2010 when she lost the Republican nomination for Senate as an incumbent during the tea party wave but ultimately won as a write-in candidate in the general election.

Murkowski’s office did not respond to a request for comment.