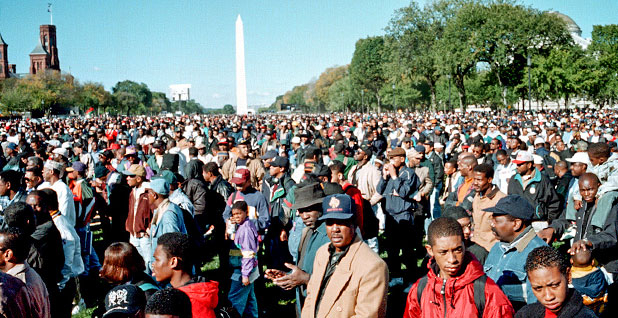 The National Park Service stopped releasing crowd counts after the controversy over its estimate for the 1995 Million Man March. The agency initially pegged attendance at 400,000 people. Photo courtesy of Wikipedia.

More than two decades ago, then-Park Police Chief Bob Langston made a decision: no more crowd counts from the National Park Service.

It was 1995, and NPS faced a lawsuit over its estimate for the Million Man March. The Park Police — with the help of helicopters, photos and a grid-based methodology — had pegged the crowd at 400,000.

Langston found himself in a series of meetings. He sat across the table from NPS regional directors, Congress members, march organizers and even one man who proposed estimating crowds with a system used for counting sand dunes.

"I made the decision after the Million Man March that this is ridiculous," Langston said in an interview today. "We’re just hitting ourselves up in the head with a hammer."

The NPS director at the time, Roger Kennedy, agreed, and NPS hasn’t given a crowd estimate since. The agency limits itself to the vague; it confirms that crowds were big or small but never delves into the realm of numbers.

Now NPS finds itself back in the middle of the crowd size debate, an unwilling participant in a political tug of war.

President Trump devoted his first morning in office to a call to acting NPS Director Michael Reynolds, ordering him to produce additional photographs of the inauguration, according to The Washington Post. The newspaper reported yesterday that the president wanted help boosting his claim that attendance was better than media reports.

Several former NPS officials said today that the situation highlights the wisdom of no longer estimating crowd numbers. Even before the Million Man March, it was a lose-lose exercise, they say.

"I don’t see that there is any upside to the agency to issue crowd estimates. While it might serve the purpose of history or give the media an additional fact … it causes the agency to be put in a position that it probably doesn’t want," said Denis Galvin, an NPS retiree who served as deputy director during the Reagan, Clinton and George W. Bush administrations. "People were always unhappy with the number."

Bob Sutton, the agency’s recently retired historian, said the agency never liked counting crowds. It was expensive, for one: Helicopters were dispatched along the National Mall for hours to capture the necessary photographs. And then the result pleased no one; demonstrators would declare it too low, while their opposition would say it was too high.

Sutton and others guessed that NPS began estimating crowds in the 1960s or 1970s. By the 1995 march, the agency had what Sutton called a "pretty sophisticated system" for counting people on the National Mall.

With the help of aerial photos and counts on the ground, Park Police officials would first estimate the total people in each square yard on a grid, according to Langston. Density of the area played a role; the agency had estimates for each square that depended on whether it was full or sparse or in between.

The problem with any estimate, however, is that it may not jibe with individual experiences. A crowd that looks sparse from the air may seem "massive" from the ground, Langston said.

In the end, everything is an estimate. For the Million Man March, analysts at Boston University more than doubled the Park Service estimate, proclaiming the crowd at about 870,000 people.

"It’s hard to do. It’s not an easy task. It’s your opinion, basically," Langston said. "There wasn’t a need for law enforcement to give people ammunition for political purposes. We’re there to maintain law and order, and make sure everybody has the ability to keep freedom of speech."