Trump wanted to know how U.S. stacks up to Russia on science 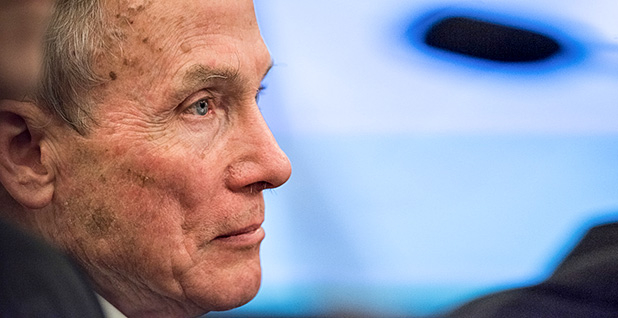 Last January, when Trump was president-elect, he met one-on-one with William Happer in Trump Tower in New York. Happer, a physics professor and vocal critic of mainstream climate science, was then a rumored candidate to become Trump’s top science adviser.

Trump didn’t talk about climate change, Happer said. He did talk about Russia.

"He asked, ‘How are we doing with respect to Russia?’ and I said, ‘We’re doing OK, but the competition is more stiff now than it was 20 years ago,’" said Happer, a professor of physics at Princeton University and former George H.W. Bush administration Energy Department official.

Happer has long been considered a leading candidate to head the White House Office of Science and Technology Policy. The science shop played a high-profile role under President Obama but still lacks a director a year after Trump’s inauguration. The White House yesterday did not comment on when or even whether it would announce a nominee for the post.

Happer said he hasn’t met with Trump since their discussion in early 2017, when they had a wide-ranging conversation on science and the potential utility of the White House science office. Happer said the meeting was between the two of them, with a brief appearance at the end by Trump’s then-aide Steve Bannon.

One of Happer’s most vivid memories from the visit: all the football helmets. "I was struck by the fact that in his office, the most striking thing is there are helmets for every NFL team in America. So he’s apparently a big football fan. I didn’t see any books, but I saw a lot of football helmets," he said.

"[Twenty years ago], the Soviet Union had just collapsed, so they didn’t have any money to spare, and China was still digging itself out of the Cultural Revolution. Both of them now are putting quite a bit of money into science. Europe has been doing that for a long time. So if you look around the world, and America has more competitors than it used to have, and so, you know, we should make sure that we hold our own," he said.

"It may be related to some global cycles or some greater outer space cycles, it’s about how to adjust ourselves to it," he said through an interpreter last March during an interview with CNBC. "Probably those people who are not in agreement with, opponents, may not be at all silly."

During that interview, Putin reaffirmed Russia’s commitment to the Paris climate agreement but said he agreed with those who said it may be impossible to stop climate change.

Science office ‘much too big’

As for OSTP’s role under the Trump administration, Happer sees the office as mainly important for coordinating budgetary priorities across the federal government. He called the office "much too big" under the Obama administration’s director, John Holdren. Happer suggested it should be a leaner organization, but he didn’t think the office should be eliminated.

"I would make an effort to find out what really needs to be done that doesn’t get the maximum headlines but would be a huge benefit in the future," he said.

While OSTP under the Obama administration played an important role in shifting the government focus toward addressing climate change, Happer would take OSTP in a decidedly different direction. He’s a widely known opponent of mainstream science, accusing both NOAA and NASA of manipulating temperature records.

"The public in general doesn’t realize that from the point of view of geological history, we are in a CO2 famine," he said.

Happer isn’t a climate scientist by training. He is known in physics for his development in the 1980s of the sodium guide star that was initially used for missile defense technology and has now gained broader application in astronomy. However, Happer says his background is enabling him to give "sober, dispassionate criticism" of the field that he said was far harder for climate scientists to do themselves.

He praised the president for pulling out of the Paris accord but said he wished Trump had focused on how the accord "did not make scientific sense." Trump’s arguments for the exit were largely about how the agreement was a bad deal for the U.S. economy.

"There is no problem from CO2," Happer said. "The world has lots and lots of problems, but increasing CO2 is not one of the problems. So [the accord] dignifies it by getting all these yahoos who don’t know a damn thing about climate saying, ‘This is a problem, and we’re going to solve it.’ All this virtue signaling. You can read about it in the Bible: Pharisees and hypocrites and phonies," he said.

Happer isn’t sure how Trump learned about him. "Some friends I guess suggested to him that he invite me in to chat with, and so I did. I enjoyed chatting with him, but it’s not as though I knew him before."

But Happer, 78, did have a prior connection to the Trump family. He had known Trump’s uncle, John Trump, a physicist at the Massachusetts Institute of Technology who in the 1930s had worked on the development of Van de Graaff accelerators, which could be used for "high voltage X-ray generation," according to a profile of John Trump in Physics Today.

"I was surprised that Donald Trump apparently knew a lot about his uncle," Happer said. "In fact, he must have learned something because amazingly he knew about Van de Graaff generators, and some of the details even. That really floored me. Most of my colleagues in the physics department don’t know that."

This was not the first time Trump’s physicist uncle had become a topic of conversation. As a presidential candidate, Trump brought up his scientist relative on the campaign trail as a means of apparently bolstering public perception of his own intelligence.

"My uncle was a great professor and scientist and engineer, Dr. John Trump at MIT. Good genes, very good genes. OK, very smart. The Wharton School of finance, very good, very smart," Trump, referencing his own academic credentials alongside his uncle’s, said in a campaign speech in South Carolina in July 2015.