Trump wants infrastructure — is it a deal or a disaster? 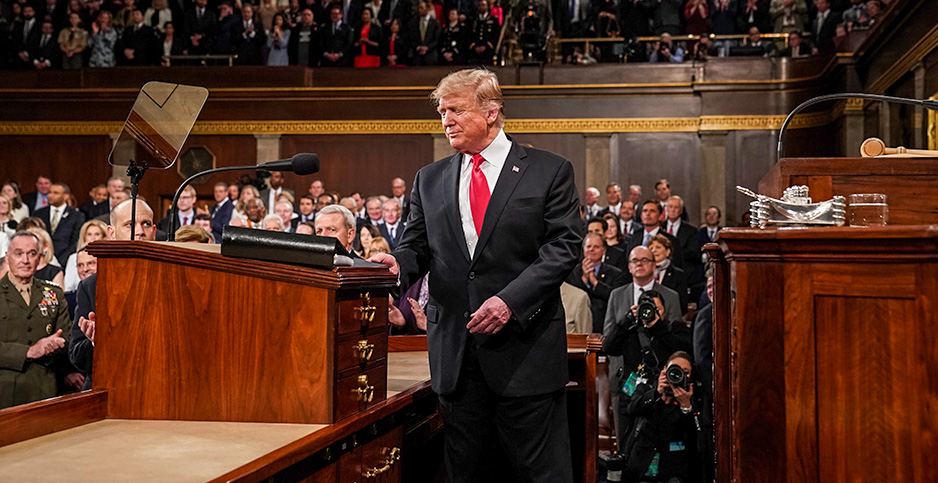 President Trump last night revived his calls for a sweeping infrastructure bill while touting the nation’s status as a net energy exporter — a direct challenge to newly elected progressive Democrats eager to replace oil, gas and coal with carbon-free energy.

"We have unleashed a revolution in American energy — the United States is now the No. 1 producer of oil and natural gas in the world," Trump said during the State of the Union speech.

That comment prompted a smile and wink from Democratic Sen. Joe Manchin of coal-rich West Virginia, ranking member on the Senate Energy and Natural Resources Committee.

"And now, for the first time in 65 years, we are a net exporter of energy," Trump added, to applause. What the president failed to note is that the United States has been on the path toward becoming the largest oil and gas producer since the fracking boom took off under President Obama.

Trump also threw a bone to Congress and Democrats on infrastructure, saying both parties should "unite for a great rebuilding."

"I know that the Congress is eager to pass an infrastructure bill, and I am eager to work with you on legislation to deliver new and important infrastructure investment, including investments in the cutting-edge industries of the future," Trump said. "This is not an option. This is a necessity."

The White House homed in on energy in a subsequent fact sheet and called on Congress to streamline permitting "so a six-month project does not turn into a 10-year odyssey." Such reforms are "especially critical for energy infrastructure and the ability of Americans to access reliable, affordable, and domestically-produced energy," according to the White House.

Some said they’re awaiting a series of executive orders the Trump administration is crafting to boost the proliferation of pipelines across the nation and limit state interference on water permitting (Greenwire, Jan. 24).

Other energy insiders said they are eyeing legislative vehicles to ease permitting of pipelines and other energy projects should congressional talks surrounding infrastructure fizzle, including discussions on a highway funding bill set to expire in 2020.

"The highway bill expires soon, so even if an infrastructure package doesn’t gain momentum — I don’t know of anyone who thinks it will — Congress is going to have to act soon on surface transportation," said one industry source. "It’s the right conversation to be discussing permitting; the same lack of certainty that applies to roads and bridges applies to pipelines and gas plants."

Ahead of the speech last night, lawmakers on Capitol Hill said they were eager to see energy and broadband included in infrastructure discussions.

"Infrastructure is all a part of [energy], how we deliver it and how we grow our economy," Manchin said. "I need high-speed, broadband. I need it all."

Manchin also has been pushing his state’s interest in being a major petrochemical manufacturing hub. That kind of economic win for the state would also bring pipeline projects and gas storage development to the region. "That would be great news, my God, for the security of the nation," Manchin said. "We have an abundance of energy in that part of the Mid-Atlantic region. We’ve been talking about it. [Energy Secretary] Rick Perry and I have talked about it in great detail."

Sen. Jeanne Shaheen (D-N.H.) said she and Sen. Rob Portman (R-Ohio) are planning to reintroduce parts of their comprehensive energy efficiency bill soon, and it "absolutely" could fit into an infrastructure package.

Other lawmakers said that ultimately, the method of payment would be a final factor in those discussions. "The dreams are easy. Paying for it is difficult," said Sen. Kevin Cramer (R-N.D.).

Similarly, Sen. Tom Carper (D-Del.) agreed that the "800-pound gorilla" is how to pay for any package.

In the new era of politics in Washington, an infrastructure package that deals only with oil and gas pipelines has to contend with the aspirations of Democrats in the House. Bill sponsors must find a midpoint between the interests of backers of the "Green New Deal" on the left and the supporters of conventional energy on the right.

"Infrastructure has become the poster child for doing something bipartisan in this Congress," said Greg Wetstone, president of the American Council on Renewable Energy.s

That could be pivotal, considering that Democratic leaders have insisted that any infrastructure package must address climate change and transition the electricity mix toward low-carbon energy.

In the Democratic rebuttal last night, Stacey Abrams — who recently lost the race for Georgia’s governor — said, "We can do so much more — take action on climate change."

In a letter to Trump last December, Senate Minority Leader Chuck Schumer (D-N.Y.) said, "A single infrastructure bill will not solve our climate problem in its entirely, but it is an important first step."

With that in mind, proponents of renewables and low-carbon technologies have been floating their own wish lists in Congress.

Wetstone, for example, said he’s been talking to lawmakers about investments in transmission lines and advanced grid technologies. "I think there are a lot of players in our sector that understand the importance of getting these decisions right. We really are falling behind in our electrical infrastructure," he said.

Similarly, more than 40 organizations, utilities and companies sent a letter to congressional leaders last month arguing that efficiency represents a "rare" bipartisan opportunity to address climate change. Congress should reinstate expired tax incentives and include various provisions in any infrastructure package, including incentives to states to adopt and enforce updated building energy codes, they said.

"Otherwise, Congress runs the risk of locking in decades of high costs and unnecessary energy waste for the duration of the physical infrastructure our economy needs," said the letter, which was signed by entities ranging from chip maker Intel Corp. to utility Southern California Edison.

For others, infrastructure offers a way to push for so-called clean coal, which typically refers to the capturing of carbon dioxide emissions from fossil fuel plants. Trump’s budget requests have proposed slashing funding for those technologies — including for natural gas and industrial emitters — but the president also has signed legislation boosting tax credits for carbon storage.

Kurt Waltzer, managing director of the Clean Air Task Force, said there are about 4,000 miles of CO2 pipelines, but that may need to at least quadruple, according to some estimates of what’s necessary to add new projects that control emissions from fossil fuels. Infrastructure legislation could be a way to address that, according to advocates.

"What we don’t really have are the large trunk lines that would move CO2 from one region to another, which we’re likely going to need if we’re going to see significant deployment of carbon capture," Waltzer said.

"What the [CO2] pipeline system needs is a kick-start," he said.

What if talks fizzle?

Despite Trump’s comments last night, some said there are unique challenges to moving an infrastructure package.

Tom Pyle, president of the American Energy Alliance, lamented that the challenge with the Trump administration’s effort to get an energy infrastructure package on the books is Democratic leaders in Congress.

Pyle questioned what concessions Republicans could make to reach a bipartisan agreement, noting that energy issues are already deeply ingrained along political divides. "Republicans aren’t going to sign up for the socialism of the ‘Green New Deal,’" Pyle said.

Furthermore, "infrastructure" has been a talking point in Trump’s speeches to Congress since he took office. Yet nothing has moved, suggesting Congress may not want to prioritize it, said James Curry, an assistant professor of political science at University of Utah.

"Trump may have a particularly hard time with this, because he has less political capital than he did a couple years ago," Curry said. "Presidents tend to find more legislative success in their first two years in office."

Unlike two years ago, when Trump first mentioned his desire for a $1 trillion infrastructure package, there doesn’t appear to be any behind-the-scenes negotiating for what fits the bill. In 2017, Trump’s transition team generated a list of 50 infrastructure projects nationwide — a total of $137 billion — that included the creation of a $2 billion lab to focus on infrastructure research, upgrading hydroelectric dams and bolstering construction of high-voltage transmission lines to transport renewable energy.

But the National Governors Association, which at the time had reportedly weighed in on those lists, told E&E News no similar process is underway — that the focus, for now, is simply getting the word out.