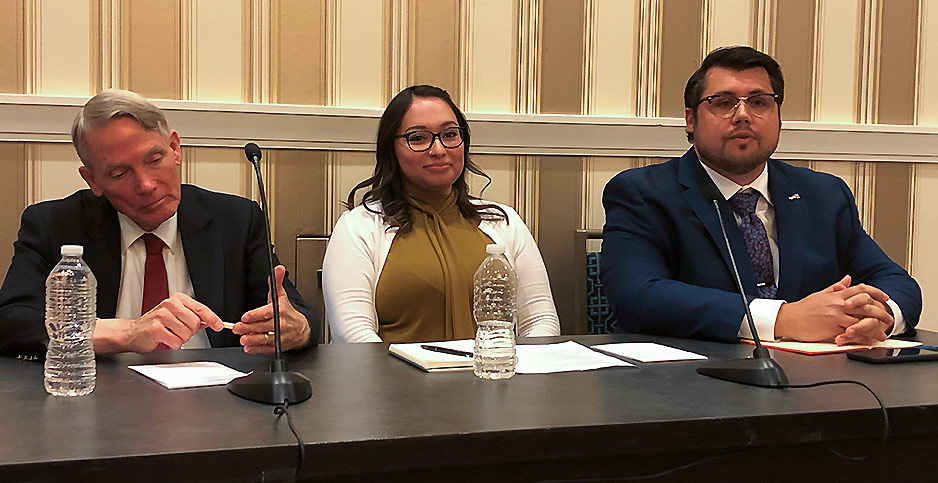 President Trump wants a climate science review where he might take center stage as host in front of a prime-time television audience, a former adviser said yesterday.

"The biggest audience, which is the average American public, has to be informed, and he thinks he’s better at doing that than I am. I’m sure he’s right," Happer said. "He would prefer it be on prime time, maybe with he himself participating, who knows, but it’s impossible to make much of an impact on the scientific community that way."

Happer said Trump was already familiar with his view of climate science, which holds that the world needs more carbon dioxide, before they met in the Oval Office with former national security adviser John Bolton and acting chief of staff Mick Mulvaney. In those early days of his White House tenure, in the fall of 2018, the climate science review seemed a certainty. Happer said Trump was receptive to his scientific claims but that the president already had his own ideas about climate.

Happer, who left the White House last September, said he stressed to the president that there was no urgency to address climate change.

"I don’t think I told him anything that he didn’t really know. I continually stressed that he’s not really dealing with so much with science as with a popular movement," he said.

Happer said that in subsequent meetings, Trump would engage with the idea of the review but was largely focused on his political fortunes.

"When you talk to him, he is interested, but his main focus is politics, how’s the next election going," he said. "It’s hard to distract him too long from his main focus. I don’t think I was with him, I think ever, when at some point in the conversation, some political issue would come up, how’s the latest hearing, how is such and such Democratic candidate looking in the polls."

NASA, NOAA and the world’s top science agencies have all warned that humans are warming the planet at an unprecedented pace and that, absent significant mitigation, the world is on pace to experience changes with dire consequences for humanity.

Happer spoke to E&E News on the sidelines of the annual Conservative Political Action Conference in suburban Washington. He participated in a panel on the "debate" around climate science, which also included a panelist, Alex Bozmoski of RepublicEn, a conservative group that pushes for climate action, who criticized Happer’s version of science. In previous years, CPAC events were critical of climate science.

Trump campaign officials worked to block the climate review because polling shows it’s a vulnerability for the president in districts he must win to stay in the White House.

In the panel, Happer criticized Republican women, who polls show are increasingly concerned about climate change and have weakened in support for Trump.

"Let me say a little about Republican women and housewives: They’ve been brainwashed," he said.

"What are they supposed to believe?" he added. "They’ve got Leonardo DiCaprio and Al Gore and other great scientists explaining this and Bill Nye the Science Guy, well, what else do you expect them to think, and so we’ve done this to ourselves."

Happer said Trump supported his planned science review and approved it to go forward but that it was sabotaged by "carefully orchestrated delays" from White House and campaign officials who didn’t want it to proceed. He said Trump told him it was "too close to the election" to do the review this year but that it could happen if he wins a second term.

"He was very apologetic and said there is a time for everything, and this is just the wrong timing, this is on hold, we’re not going to abandon it," he said. "He’s a politician. So what do you expect a politician to say?"