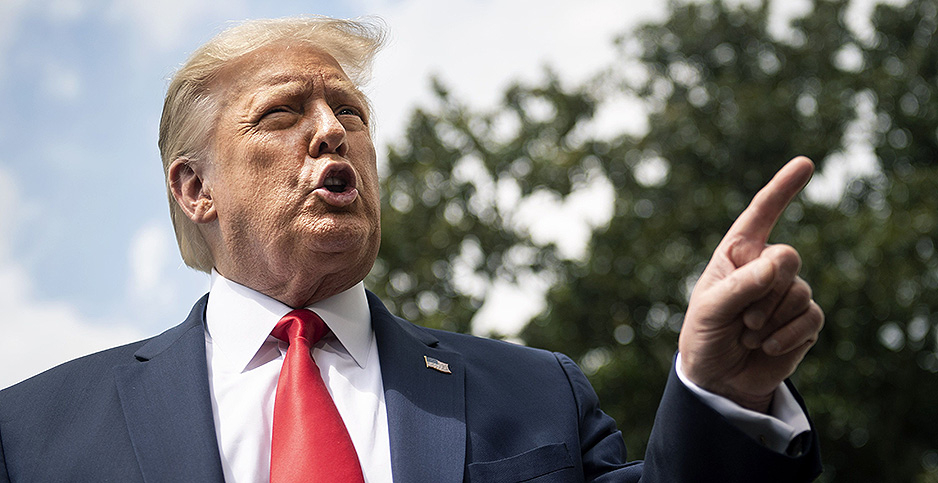 President Trump said Saturday that he wants to use money from the Federal Emergency Management Agency to pay for unemployment benefits. CNP/AdMedia/Sipa/Newscom

President Trump made plans Saturday to help pay for a new round of unemployment benefits by siphoning money from Federal Emergency Management Agency disaster funds.

The move — one of several pandemic-related steps Trump took over the weekend — comes amid one of the busiest hurricane seasons in recent memory. Trump also announced that he would take executive action to mitigate evictions and defer payroll tax payments.

The announcements follow a week of protracted negotiations among congressional leaders over the latest coronavirus economic relief package.

Millions of Americans are out of work or underemployed because of the COVID-19 pandemic, and Trump has sparred with congressional Democrats over who is at fault for the lack of progress in crafting a continued federal response.

An earlier federal effort that provided an extra $600 in weekly unemployment benefits for eligible applicants has expired.

At a press conference Saturday at his golf club in New Jersey, Trump sought to blame Democratic leaders.

"Democrats are obstructing all of it; therefore, I’m taking executive action," Trump said.

Democrats have countered that Republicans are too focused on corporate relief in their response and that GOP plans do not go far enough to protect the unemployed. Republicans have proposed a stimulus bill of about $1 trillion, while Democrats want a plan that would be closer to $3 trillion. Trump largely has stayed out of the negotiations.

"These policy announcements provide little real help to families," the Democratic leaders said in a statement. "Instead of passing a bill, now President Trump is cutting families’ unemployment benefits and pushing states further into budget crises, forcing them to make devastating cuts to life-or-death services."

It’s unclear if Trump’s executive actions will be able to withstand a legal challenge — as they represent a drastic shift in power between the executive and legislative branches of government. The actions are essentially an end run around the power that the Constitution grants to Congress to control tax and spending policy.

The text of the executive action notes that the Department of Homeland Security’s Disaster Relief Fund has more than $70 billion in emergency assistance funding available. Trump wants to direct FEMA to draw on those funds to help provide $400 per person in weekly unemployment benefits. Most of that money — $300 — would come from the FEMA disaster fund. The remaining $100 would come from states.

Some FEMA disaster money would remain to cover the cost of other emergencies. "At least $25 billion of total DRF balances will be set aside to support ongoing disaster response and recovery efforts and potential 2020 major disaster costs," according to the memorandum.

Schumer criticized Trump’s plan as unworkable during an interview yesterday on ABC’s "This Week with George Stephanopoulos."

"Most states will take months to implement it because it’s brand-new; it’s sort of put together with spit and paste," he added. "And many states, because they have to chip in $100 and they don’t have money, won’t do it. And to boot, it depletes the hurricane trust fund to defer this money, to pay for this money at a time when we’re at the height of hurricane season."

NOAA leaders recently revised their forecast for the current hurricane season, which ends Nov. 30. It is now expected to be "extremely active" and may bring twice the number of typical hurricanes.

At his Saturday press conference, where club members jeered reporters and cheered the president, Trump also took a swipe at the Green New Deal, the broad-based climate policy proposal championed by Rep. Alexandria Ocasio-Cortez (D-N.Y.). Trump has stated, incorrectly, that Democrats are trying to include it in negotiations for a stimulus package. In recent days, Trump has referred to Ocasio-Cortez as "childish" and attacked her as well as the proposal.