Trump was briefed on plan to review climate science 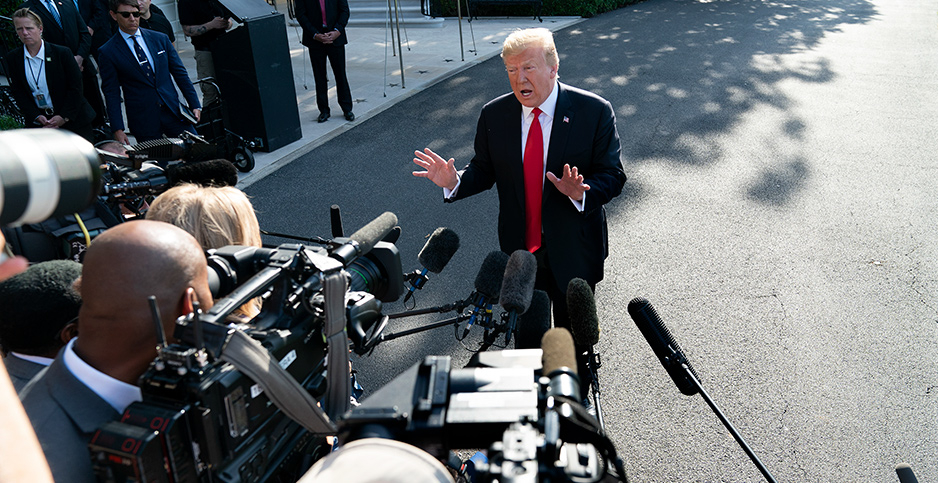 A White House initiative to scrutinize climate science appears to be making headway.

Will Happer, the senior director for emerging technologies at the National Security Council, met with President Trump earlier this month to brief him on the plan, according to two sources. The initiative is expected to highlight uncertainties in climate research and downplay the threat of global warming to national security.

Happer, an emeritus physics professor at Princeton University, has said that the world is experiencing a carbon dioxide "drought" and that the planet would benefit from burning more fossil fuels.

The shape of the plan is unclear, though it’s expected to question scientific elements of the National Climate Assessment, three people with knowledge of the plan told E&E News. In recent weeks, Happer has discussed his ideas with people associated with think tanks that reject established climate science, including the Competitive Enterprise Institute and the CO2 Coalition, which Happer founded.

Some White House officials, including Larry Kudlow, director of the National Economic Council, and science adviser Kelvin Droegemeier, have privately voiced opposition to the review, according to sources.

There is a push to settle on the plan "sooner rather than later," according to a person close to the planning. The earliest it might be revealed is a month away, and it would likely be done through an executive order, sources said. While those planning the initiative considered involving federal researchers at one point, the current idea is to use outside researchers who have legitimate academic credentials but who disagree with established climate science, sources said.

The plan would be run through the National Security Council. National security adviser John Bolton is aware of the plan and has endorsed it, but he is not directly involved in planning the review, sources said.

The project could produce a working white paper in as soon as three months after it begins, according to one of the planners. Much of it will draw from existing work of its potential participants. Those in talks to participate in the initiative include John Christy of the University of Alabama, Huntsville, and Judith Curry, former head of the Earth and Atmospheric Sciences Department at the Georgia Institute of Technology.

Both of those researchers say that humans play a minimal role in climate change, a position rejected by the vast majority of climate scientists. One possible leader is Paul Robinson, a former Department of Energy official who oversaw talks about nuclear weapons tests with the Soviet Union during the Cold War but who is not trained in climate science.

Steve Koonin, a former Obama administration Energy Department official and a physicist at New York University, is closely involved in the planning. Both he and Happer were involved in former EPA Administrator Scott Pruitt’s plan to conduct a "red team, blue team" review of climate science. Pruitt got the idea for that effort, which was eventually shut down by former White House chief of staff John Kelly, from a Wall Street Journal op-ed written by Koonin.

Last month, Koonin spoke to students at Purdue University in Indiana and essentially outlined his reasons for why he wants to conduct an "update" of the National Climate Assessment.

"There’s a real disconnect between what’s in the reports and in the scientific literature and what you hear in the political, in the popular and in the media coverage of climate science," he said, according to video of the event. "There are natural influences that are also operative, and you better have those under control if you’re going to attribute what you see to human influences."

Such claims are representative of the work the commission is expected to produce, the sources said.