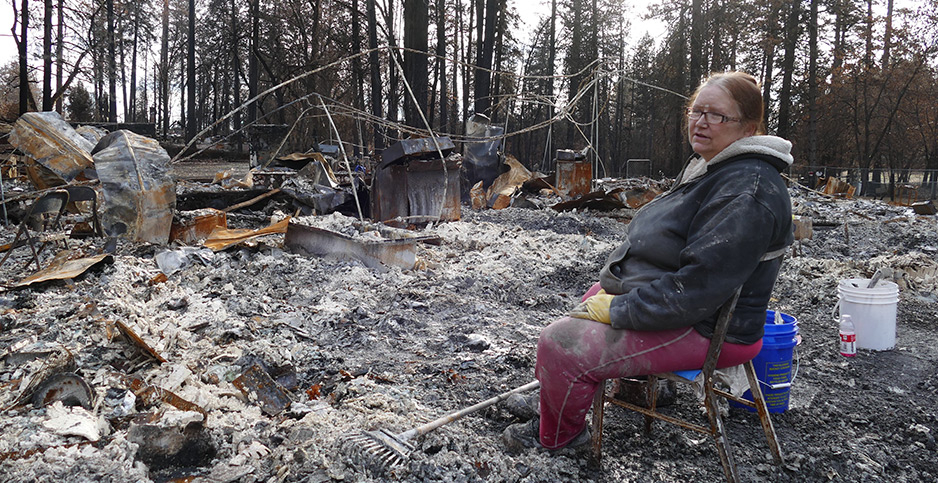 Donna Williams sat in the ruins of an apartment house in Paradise, Calif., where she had lived for 19 years. Barbara Munker/dpa/picture-alliance/Newscom

President Trump’s threat to yank disaster funds from California has escalated a long-standing fight over forest management, and experts are divided over whether he has the power to do it.

The extraordinary suggestion to halt assistance from the Federal Emergency Management Agency to an area devastated two months ago by wildfire stands to politicize humanitarian assistance under a president who rejects climate science. Trump previously threatened to interrupt emergency aid to Puerto Rico, which was reeling from Hurricane Maria, when he falsely said in a 2017 tweet that officials were using disaster funds to "pay off other obligations."

Yesterday, the president sharpened his warning that he could withhold catastrophe funding based on political disagreements.

Trump said in a tweet that California should have thinned more trees to prevent the Camp Fire, the most damaging disaster worldwide in 2018. The October blaze killed at least 86 people and destroyed 11,000 homes, causing $16.5 billion in damage.

"Unless they get their act together, which is unlikely, I have ordered FEMA to send no more money," Trump tweeted.

Craig Fugate, who led FEMA under President Obama, said it’s unlikely Trump would succeed in stopping the flow of money to an area the president already deemed a disaster — as Trump did shortly after the Camp Fire ignited.

The law governing disaster relief, the Stafford Act, is "very clear" that FEMA must fund at least 75 percent of eligible losses and expenses once the president declares a disaster, Fugate said.

It’s hard to imagine a court of law allowing Trump to cut off funding that he’s already approved, Fugate said.

But he still has options.

Trump could prevent California from receiving federal disaster money in the future. Presidents have sole discretion over whether to declare a disaster; all FEMA can do is recommend a declaration.

Fugate warned of the human cost of that approach.

"We’ve never — [and] I hate to use this term, but I don’t know how else to describe it — we’ve never weaponized the declaration process to use it for something other than judging disasters on their merits," Fugate said.

Others suggested the president could hamstring the rebuilding process by placing conditions on accessing the money, like requiring an overhaul in forestry practices.

The Stafford Act grants the feds broad power to decide how disaster money can be used. Past administrations compelled local governments to harden their infrastructure — for instance, refusing to pay for a bridge replacement unless it could withstand more extreme conditions.

Trump is pushing that further than his predecessors. But the unsustainable price of wildfire damage does buttress the argument that he’s acting proportionately, said Ed Thomas, a former FEMA official who’s now president of the National Hazard Mitigation Association.

"I’m not saying this has been done elegantly or appropriately [by Trump]. But it’s well worth thinking about: What do we need to do in this new normal that we’re living in … and is California doing all it can do?" he said.

Neither FEMA nor the California governor’s office is commenting on the details of Trump’s order, and it’s not clear what the president has done other than tweet about it.

"That tweet came out of left field, and it did not really help in the situation," said Rep. Doug LaMalfa, the Republican who represents Paradise and the surrounding areas destroyed by the Camp Fire.

LaMalfa said he has been reassuring constituents that aid will continue to be available and that Trump is only "saber rattling." The lawmaker said he shares those frustrations about land management in California, but "it shouldn’t be visited on FEMA or the victims of the fire."

But forestry experts doubt Trump’s key claim: that more logging would have prevented the Camp Fire.

Wildfires usually ignite homes through floating embers. Studies have shown those embers come from within 200 feet of the house — which means cutting trees on and around the homeowner’s property halts fire damage, but logging deep in the forest does not, said Ray Rasker, executive director of the research group Headwaters Economics.

"It feels like right now, this is not the time to be pointing fingers," but rather to make sure everyone has the resources they need, Daley said.