Trump welcomed climate deniers. What now for them? 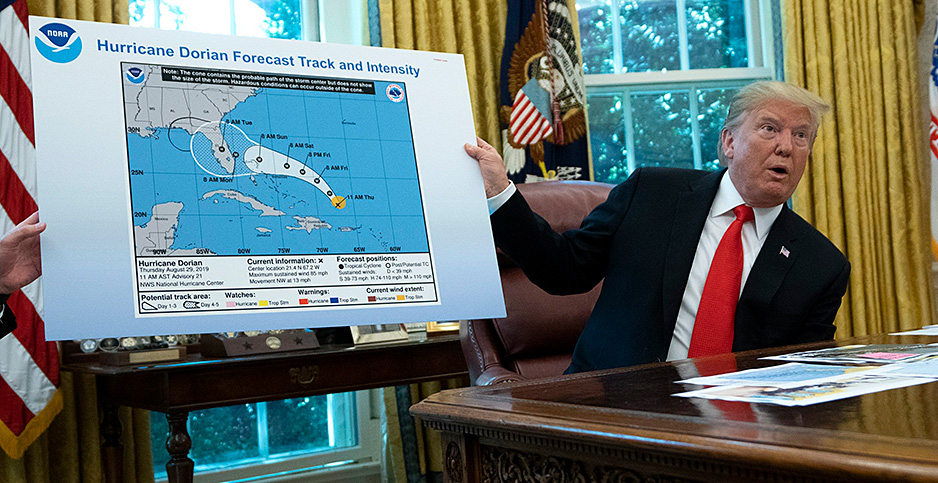 President Trump receives an update on Hurricane Dorian in August 2019. The map was altered with a black marker to put Alabama in the storm's path after Trump had incorrectly tweeted the state was in danger. Stefani Reynolds/Picture Alliance/Consolidated News Photos/Newscom

The next four years will be a "turkey shoot" for climate denialists who are preparing to fight efforts by the Biden administration to restrict the use of fossil fuels.

That’s how multiple outside energy advisers to the Trump administration view their new role: as agents of opposition during the presidency of Joe Biden and his governmentwide effort to address climate change.

The Trump years have brought access to adversaries of climate action that once seemed unimaginable even to those who helped shape President Trump’s policies to promote fossil fuels without regard to rising temperatures.

For the last four years, energy lobbyists and opponents of climate regulation have had regular White House meetings, access to the president, and a direct line to top officials at the EPA and Interior Department. They helped mold the administration’s dismantling of environmental protections in ways that could make it harder for Biden’s EPA to craft new regulations.

The golden years of climate denial might be coming to an end on Jan. 20, but that doesn’t mean the party’s over, some of these advisers said.

In fact, the Biden years will be an "opportunity-rich environment," said Myron Ebell, Trump’s EPA transition team leader and director of the Competitive Enterprise Institute’s Center for Energy and Environment.

"It is much easier to stop stuff than it is to get stuff done, so we’re actually, from a performance standpoint, groups like CEI, generally more successful when they’re opposing things than when they’re promoting things," Ebell said.

The Trump administration has often turned to outside energy advisers to shape policy. Senior EPA officials have met with energy lobbyists and the Cooler Heads Coalition, a group devoted to promoting climate change denial and weakening environmental regulations.

A number of advisers who have been influential in the Trump era are connected to the energy industry or think tanks and foundations that oppose regulations. Their influence can be seen in the recent push to install a climate denier in a senior position at NOAA, to restrict the use of public health science at EPA, and to roll back or water down dozens of climate-related regulations across the government.

For some of them, being outside the margins of power is a familiar position — and one they relish. For it permits them to find ways to grind the gears of legislation to a halt, said Mike McKenna, a former energy lobbyist who served as Trump’s deputy director of legislative affairs.

He said that the Clinton and Obama years were good for those who opposed climate action, and he anticipates the Biden administration will be exactly the same. The only things that change when an administration leaves power are the "avenues in which these contests happen," McKenna said.

"In most Administrations, the trick is trying to make sure bad things don’t happen, and there are a few ways to stop bad ideas (Congress, media, judges, and even opponents within an Administration)," he wrote in an email. "Most of the job — whether you’re working for something or against something — is framing the issue for people, anticipating its likely trajectory, and just generally being a little quicker or smarter or more experienced than the other side."

For Tom Pyle, president of the American Energy Alliance, a primary focus of the next four years will be ensuring that vehicle efficiency standards established under Obama don’t come back under Biden. He said his group will also focus on public messaging against attempts to bring back the Clean Power Plan and stopping Biden’s net-zero carbon emissions policies.

That will be much easier if the Senate remains in the hands of Republicans. Pyle also said his side could tie up regulatory action in courts for years. Anything that makes its way to the Supreme Court will have a 6-to-3 conservative majority to overcome.

"I’m not preparing for any transformational legislative proposals, having any real legislation in this environment," Pyle said. "It’s all pie in the sky. They can’t really do anything unless they have a legislative solution.

The Trump years have yielded access and influence that go far beyond other Republican administrations, said Steve Milloy, a member of Trump’s EPA transition team and an attorney who has received funding from the energy and tobacco industries to fight regulations.

The era brought him the "best access in the world" because the Trump administration had already been influenced by his work and immediately recruited them to work. That’s a contrast to the George W. Bush years — which also saw attacks on climate science and environmental rollbacks — because the GOP establishment didn’t want anything to do with people who were considered extreme, he said.

"The Bush thing was a whole RINO wonderland. We had almost no influence. You couldn’t teach those people; you couldn’t talk to them," Milloy said, using the acronym for "Republicans in name only."

Soon, he added, there will be plenty of work to be done attacking Biden’s climate policies, and using them as a cudgel to benefit Republicans in upcoming elections.

After Trump, the party won’t go back to Bush-era climate and energy policies, but will instead be modeled on the right-wing policies of the last four years, Milloy asserted.