Trump: What’s good for Texas and Okla. is good for America 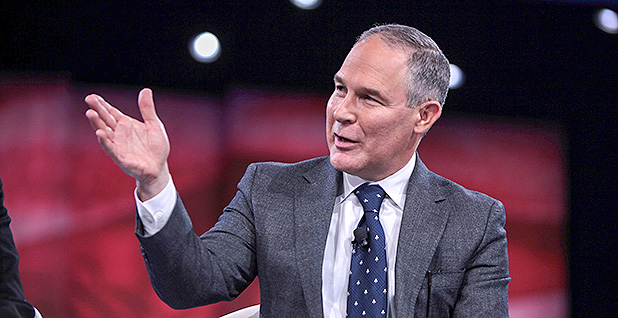 Men and women marching up to the gold-plated elevators at Trump Tower for meetings with the president-elect would bring an almost evangelical zeal for fossil fuels to Washington.

President-elect Donald Trump’s candidates to lead U.S. EPA and the Energy Department are the antithesis of Obama administration leadership at the agencies. They view their home states of Texas and Oklahoma as models of light-handed regulation, and they believe the gushers of boom-time oil money in the region come in spite of Washington’s heavy-handedness.

Scott Pruitt (R), the Oklahoma attorney general, and Kathleen Hartnett White, a former head of the Texas Commission on Environmental Quality, were scheduled to meet with Trump yesterday and are considered to be on the shortlist for the job of EPA administrator. To replace Energy Secretary Ernest Moniz, the shortlist includes billionaire Oklahoma oilman Harold Hamm and reportedly Larry Nichols, former head of Oklahoma City-based shale gas giant Devon Energy Corp.

What they all have in common is a Texas- and Oklahoma-style adherence to hands-off energy and environmental regulation. Politicians in the GOP-led states argue that they have created jobs and economic growth by giving energy companies a free hand.

But there’s a downside. Texas leads the nation in oil spills and rarely takes enforcement action against the companies responsible. Oklahoma has been wracked by earthquakes tied to the oil industry, and the state’s slow, defensive response upset its residents. Both states are big emitters of carbon dioxide and other gases linked to global warming, and air pollution in most of Texas’ big cities has been a major problem for decades.

Pruitt was elected in Oklahoma with big donations from poultry farmers who wanted to roll back the state’s restrictions on dumping waste in rivers. In Texas, White was part of a campaign to prop up a particularly dirty form of coal production.

The attention Trump has given to Texans and Oklahomans suggests the states are, in fact, models under a Trump EPA and DOE.

"Is the rest of the country ready to embrace oil and gas above all other forms of energy and to the detriment of the environment?" said Cory Williams, a Democratic state representative from Stillwater, Okla.

White was an environmental regulator in Texas from 2001 to 2007, when her agency, TCEQ, clashed with public interest groups trying to move the state away from burning coal.

In 2007, TCEQ voted 2-1 with White’s support to give the utility giant TXU Corp. an air permit for coal-fired power units at its Oak Grove site in Texas. There were concerns inside her agency and among outside groups about the effect on air quality in Austin and the North Texas region. National groups thought a Texas decision to double down on coal use would be a disaster for the climate.

There had also been public controversies about the agency’s handling of pollution cases.

TCEQ under White faced "mounting scrutiny by lawmakers and citizen groups over recent revelations about failures to adequately inspect or regulate industry sites," the Austin American-Statesman reported in 2004, "such as massive quarries, or to collect fines from polluters that are significant enough to deter and hold them accountable."

The Dallas Morning News channeled the views of environmental advocates in a 2007 editorial as it became clear that White would be leaving TCEQ.

"She has been an apologist for polluters, consistently siding with business interests instead of protecting public health," the newspaper wrote. "Ms. White worked to set a low bar as she lobbied for lax ozone standards and pushed through an inadequate anti-pollution plan. She also voted to approve TXU’s pollution-intensive Oak Grove coal units, ignoring evidence that emissions from the lignite plant could thwart North Texas’ efforts to meet air quality standards."

The TXU saga that played out in 2007 was a defining moment for White. She played a central role as the top environmental regulator in the state, and she was around for a deal that ultimately unraveled as a result of a spectacularly bad bet on the direction of energy in the United States.

That year, as White was wrapping up her tenure at TCEQ, KKR & Co. LP, TPG Capital and Goldman Sachs led a record leveraged buyout of TXU, with an estimated value of $45 billion. Critics warned that the company, whose name became Energy Future Holdings Corp., was taking on too much debt.

The group of Wall Street heavyweights earned praise for a handful of environmental promises, including scrapping eight of the 11 planned coal-fired power units. But a surge in U.S. shale exploration and an accompanying rise in natural gas production were factors in a plunge in gas and electricity prices, souring the numbers behind the leveraged buyout. The company had counted on robust prices as it ran coal and nuclear power plants.

Today, nearly a decade later, the remnants of Energy Future Holdings are grappling with a bankruptcy proceeding that left one of the state’s largest sources of power in legal limbo.

Jim Marston, regional director of the Texas office of the Environmental Defense Fund, said White fits "the stereotype of what many people think of Texas government" — in other words, that "we don’t really care about the science" and that "regulators here are in the pocket of the regulated."

"I’ll get to be at dinners around the country where people make fun of Texas again," Marston said, but added that many people in Texas regulation are "smart and would apply the law. She’s just not one of them, sadly."

Mike Nasi, a partner with the law firm Jackson Walker in Texas who has represented electricity and mining interests, said it would make sense to consider someone from TCEQ for EPA. Nasi called White’s tenure at TCEQ "impressive" and said the former regulator is "vested in the science behind environmental regulatory issues, much more so than a lot of people who fill that position can be."

White went on to a staff job at the Texas Public Policy Foundation, a nonprofit group that has been an incubator for GOP policy positions in the state. In 2012, The Texas Observer reported, citing leaked documents, that the foundation was funded by a who’s who of energy and utility companies, including Koch Industries Inc., Exxon Mobil Corp., and pieces of the former TXU, such as Luminant and Oncor Electric Delivery Co.

As Oklahoma’s top state lawyer, Pruitt built a career on fighting President Obama’s environmental rules. He played a key role in organizing other Republican attorneys general to oppose Obama administration regulations on air pollution from oil and gas drilling. He joined in on lawsuits challenging the Clean Power Plan, saying in all cases that the Obama regulations represented a vast overreach by the federal government.

The New York Times reported in 2014 that Pruitt frequently leaned on oil and gas companies for advice in his anti-regulatory campaign. In some cases, he used briefs and letters drafted by energy companies and their lobbyists to build his case, after changing a few words and putting them on state letterhead (Greenwire, Dec. 8, 2014)

The oil and gas industry has been generous to Pruitt. Energy companies are among his largest sources of campaign contributions, contributing $250,000 out of the $3.1 million he’s raised since 2002, according to data compiled by the National Institute on Money in State Politics.

During that time, though, "Scott Pruitt hasn’t weighed in on the side of consumers toward the oil and gas industry, with all the damage that’s being done on a grand scale by that industry," said Williams, the Oklahoma lawmaker.

The real battles fought by Pruitt and White have been over the separation of state and federal powers to regulate industry.

Ironically, the Texas and Oklahoma officials may wind up reversing themselves if they join the Trump administration, said Paul Nolette, an assistant professor of political science at Marquette University who has studied the tension between states and federal law.

Trump could impose a sweeping national plan to roll back environmental regulations, which is antithetical to the federalist, state-led approach that Pruitt has argued for in Oklahoma.

That could lead to a similar federalist revolt by blue states that want to maintain tough environmental standards, Nolette said. Courts have begun to show more deference to states that challenge the federal government on energy policy, he noted, saying they’re due "special solicitude" that gives them standing to bring lawsuits.

"The Californias, New Yorks and Massachusetts are not going to go gently into the good night," he said, "They’re going to be fighting."

In the oil and gas patches of Texas and Oklahoma, where production boomed for almost a decade before global oil prices crashed in 2014, the go-it-alone approach to regulation has tended to favor companies before public accountability.

Oklahoma and Texas both take a "compliance-based" approach to most environmental violations, allowing companies to avoid a penalty if they bring their operations in line with the law. As a result, enforcement tends to be lax. Texas oil and gas inspectors cited 61,189 violations and assessed 1,878 penalties, according to a state legislative report issued in April. That’s about one penalty for every 32 violations (EnergyWire, Dec. 10, 2014).

Texas experienced 2,733 spills and leaks at oil and gas sites in 2015, up from 2,500 leaks in 2014 — more than any other state, according to an E&E News analysis of state data. Texas is also one of few states to see an increase in spills — the 9 percent year-over-year uptick was in line with an increase in oil production over the same period. (EnergyWire, July 21).

Texas led the country in 2014 in carbon dioxide emissions from fossil fuel consumption, at about 642 million metric tons, according to U.S. Energy Information Administration data. That was more than the next two states — California and Pennsylvania — combined.

Dallas and Houston — the two biggest metropolitan areas in Texas — have high levels of ozone pollution, and El Paso has high levels of soot, according to EPA. San Antonio is likely to slide into nonattainment for ozone soon, in part because of pollution from oil and gas operations.

Texas and Oklahoma have also employed a laissez-faire approach to corporate accountability and regulation in dealing with one of the strangest side effects of the nation’s drilling boom: earthquakes linked to oil-field disposal wells. A huge increase in the amount of wastewater injected underground has pressured faults, causing them to slip.

Last year, Oklahoma was shaken by 903 earthquakes of magnitude 3 or greater, more than California. The rate has slowed this year, but the quakes have gotten larger. The state had its biggest recorded quake, magnitude 5.8, on Sept. 3.

Oklahoma started seeing an uptick in earthquakes in the state in 2009. But, under pressure from the oil industry, it took until 2015 for Gov. Fallin and the Oklahoma Geological Survey to firmly acknowledge the link between the shaking and the state’s dominant industry.

Fallin has been floated as a potential nominee to lead Trump’s Interior Department.