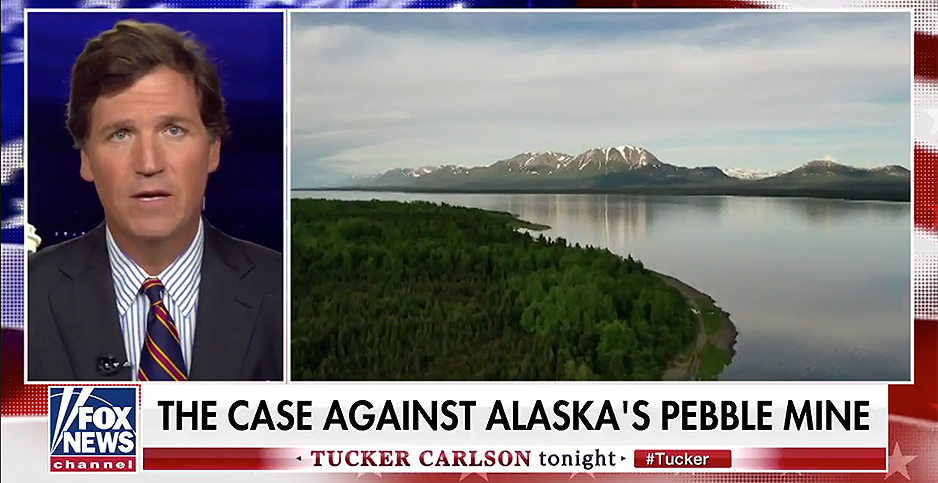 Tucker Carlson went after the proposed Pebble Mine project on his show Saturday. Fox News

Fox News pundit Tucker Carlson has become the latest influential conservative to voice concern about the proposed Pebble mine in southwest Alaska.

The Pebble Partnership appeared to be barreling toward final approval of its controversial copper and gold project upstream from Bristol Bay, home to a fishery that supplies half the world’s wild sockeye salmon.

But shortly after the Army Corps of Engineers decided in July that the mine would have "no measurable effect" on fish populations, conservation-minded conservatives began to voice opposition.

Carlson chimed in last Friday on the network never far from President Trump’s attention. On most environmental issues, Carlson said in his "The Case Against Alaska’s Pebble Mine" segment, there is a clear partisan split. But not with Pebble.

"Suddenly," Carlson said, "you are seeing a number of Republicans, including some prominent ones, including some very conservative Republicans, saying, ‘Hold on a moment — maybe Pebble mine is not a good idea. Maybe you should do whatever you can not to despoil nature. Maybe not all environmentalism is about climate.’"

Bass Pro Shops founder Johnny Morris appeared on the show to explain why so many anglers oppose mining in the Bristol Bay region.

"This mine is proposed really in the heart of the largest spawning grounds in the world, one of the most pristine areas, watersheds, really, in the world," Morris said. "Over 50 million salmon have already spawned there this year."

Morris explained that tourism, commercial fishing and outdoor recreation provide 14,000 jobs in Bristol Bay, while the Pebble mine may provide about 2,000.

Pebble CEO Tom Collier said in an interview with E&E News that Morris was well-intentioned but misinformed.

Many fishing jobs in Bristol Bay, he said, are seasonal. Mine workers would make $100,000 salaries during Pebble’s proposed 20-year operating period, he added.

The five-minute segment on Carlson’s show capped off what has been an awful couple of weeks for Pebble, starting after Trump signed the Great American Outdoors Act into law on Aug. 4 with Morris in attendance.

President Trump the next day said he would "look at both sides" of the debate over Pebble.

"Spent a lot of time working to #StopPebbleMine this week and so did @DonaldJTrumpJr. Encouraged by broad support and strong momentum. Soon (I believe) we will celebrate a huge win for all those who love the outdoors when @POTUS makes a final decision," he said.

Pebble foes, Collier said, are offering a false choice between maintaining the fishery and mining. The Army Corps’ environmental review proves the two can coexist, he said.

"There is a group of elitist sportsmen in America that want to keep Bristol Bay as their personal playground," he said, excluding Morris, for whom he voiced admiration.

The Pebble mine is also unpopular in Bristol Bay among Alaska Native tribes and environmental groups, as well as sport and commercial fishermen.

Collier speculated that Trump may not succumb to pressure from the younger Donald and other conservatives opposing Pebble.

While the Obama administration preemptively blocked large-scale mining in Bristol Bay, the Trump team has been far more accommodating of the project. Collier hopes the current administration won’t change course just before the Army Corps appears ready to grant Pebble a permit.

Otherwise, he warned, investors will steer clear of U.S. infrastructure and mining projects.

"If politics can come in at the last minute — notwithstanding the process that’s set out in statute — and interfere and stop a project, then we don’t have rule of law, and people aren’t going to invest in America," Collier said.

House Oversight and Reform Committee Democrats then called for a probe by inspectors general into the Pebble permitting process. Collier, maintaining that the Army Corps’ environmental impact statement will hold up to scrutiny, also asked for an investigation. "Bring it on," he said.

Collier said he’s confident that the Army Corps’ environmental impact statement indicates the mine will win approval. But he admitted that it has been a rough period for Pebble (Greenwire, July 24).

"It’s not often when you have a week that the son of the president and Democratic candidate comes out against your project," he said.