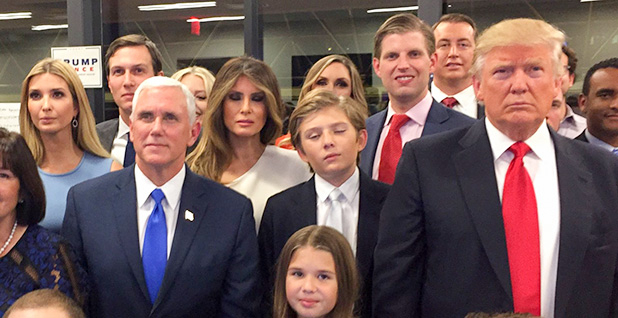 Trump's pledges to pull the United States out of the Paris climate agreement and abandon the court-challenged Clean Power Plan are within his power, notes ClearView Energy Partners in an overnight analysis of Trump's Election Day upheaval. Photo courtesy of the Trump campaign via Twitter.

With President-elect Donald Trump’s stunning election victory yesterday, the states — not Washington, D.C. — are likely to become the prime engines of energy and climate policy, based on the Republican candidate’s campaign denunciations of the Obama administration’s regulatory agenda.

Trump has promised to kill U.S. EPA’s Clean Power Plan, with its mandated goal of carbon emission reductions from power plants, and was equally dismissive of the agency, telling Fox News last month, "Environmental Protection, what they do is a disgrace. Every week they come out with new regulations.

"We’ll be fine with the environment," Trump said. "We can leave a little bit, but you can’t destroy businesses."

Trump’s pledges to pull the United States out of the Paris climate agreement and abandon the court-challenged Clean Power Plan are within his power, notes ClearView Energy Partners in an overnight analysis of Trump’s Election Day upheaval.

"If CPP challengers prevail before the D.C. Circuit, the Trump Administration seems unlikely to appeal," the analysis says. "If the D.C. Circuit sends CPP back to the EPA for revision, a substantially weaker, new rule could emerge (and not quickly, we suspect). If the rule survives and challengers appeal to the Supreme Court, we have a hard time imagining the Trump Administration mounting an ardent defense.

None of this was on Trump’s public priority list during the campaign.

He will be in position to support and sign Republicans’ congressional energy initiatives that have built up steam while blocked by Democrats and the administration. The ClearView Energy analysis concludes that a Trump administration could also use executive authority to slow or stall renewable energy leasing on federal lands, reinstate federal coal leasing and federal oil and gas lease sales, grant an easement to the Dakota Access pipeline, approve a new permit for the Keystone XL pipeline, and expand liquefied natural gas exports.

Trump has also pledged to revive the ailing coal industry in the United States — though how effectively his policies will be able to do so remains to be seen.

"Trump seems to be arguing that he would support both coal and natural gas, but if we’re looking at that standpoint from the electric grid, those two resources compete with one another," noted Emily Hammond, a professor at the George Washington University Law School. "It’s a stance that would be very difficult to turn into on-the-ground policies, and frankly, it’s a stance that’s running contrary to what market forces are doing."

Trump’s stunning election victory was immediately welcomed by the conservative-leaning American Energy Alliance, whose president, Thomas Pyle, called it "an opportunity to reset the harmful energy policies of the last generation."

Trump "has laid out an energy plan that puts the needs of American families and workers first," Pyle said in a statement.

Back to the states

If Trump takes a hands-off position on grid transformation, that will leave governors’ offices, state legislatures and city halls to respond to the dramatic changes in energy production and electric power technologies, by default. States are already embarking on many different courses based on their own energy profiles and political leadership. Utility companies are intent on charting their own futures amid a fast-changing landscape of cheaper renewable fuels, new smart-grid technologies and distributed energy opportunities.

One action area in Washington, D.C., is the Federal Energy Regulatory Commission, with its charge to regulate the interstate transmission grid and wholesale power prices. Trump will have the opportunity to fill two existing vacancies subject to Senate confirmation and choose its next chairman. His ideas about FERC’s mission are yet to be revealed. The Nuclear Regulatory Commission also has two vacancies to fill, and that may create an opportunity for a Trump White House to affect reviews of new nuclear power technologies.

Climate activists had hoped that FERC, under Clinton, would be receptive to petitions to recognize the economic value of zero-carbon electricity in wholesale power rates. The nuclear industry is also looking to FERC for help, as a dozen or more reactors struggle to make a profit in competition with natural gas generation.

Now that scenario is much more in question, and an activist role for FERC seems less likely.

"There are going to be some challenges in terms of carrying out FERC’s workload," said Joel deJesus, a partner at the Dinsmore & Shohl law firm, citing informal conversations with commissioners and FERC staff. DeJesus — interviewed before yesterday’s election results were in — suggested that an understaffed commission would have to place its focus on statutory obligations and that any extra work on policy development "may take a backseat for however long it takes to fill those vacancies."

DeJesus also highlighted unfinished business from last year’s proposal for emergency authority enabling the secretary of the Energy Department to play a more hands-on role in the bulk power system during a major crisis. The authority would add a "new regulatory regime" to traditional oversight by FERC and the North American Energy Reliability Corp., he said.

There is bipartisan support for stronger defenses against state-backed cybersecurity threats to the power grids and other critical infrastructure, and for protecting vital parts of the interstate power networks against physical assaults and natural disasters. Trump has also called for expanded federal capabilities to defend and strike back against cyberattacks. He told an audience last month, "The United States must possess unquestioned capacity to launch crippling counter-cyberattacks. This is the warfare of the future. … America’s dominance in this arena must be unquestioned, and today, it’s totally questioned."

DeJesus noted that a report is due from DOE recommending responses to a national emergency threat to power networks. "How broadly the Department of Energy defines what a grid security emergency is and what actions it takes in response to those are still open questions," deJesus said.

DOE’s response to this congressional directive is due soon, joining a shelf of other policy studies and proposals that have come or will arrive before the Obama administration shuts down. They include proposals for upgrading the electric power system as part of the second installment of the Energy Department’s Quadrennial Energy Review, a strategy for protecting power grids against damaging currents from solar storms, a presidential commission’s recommendations on combating cybersecurity threats and a National Cyber Incident Response Plan from the Department of Homeland Security.

The studies were seen as a bridge between the Obama administration and a Clinton-led successor in the energy and grid security areas but now may be quiet codas to Clinton’s widely unexpected defeat.

Join us live on Facebook today at 1 p.m. EST for E&E News reporters’ postmortem on what election 2016 means for energy and environment issues.