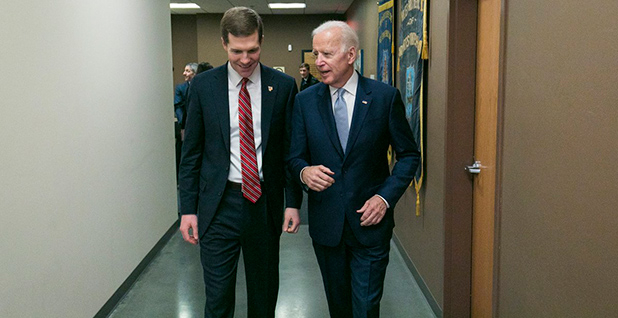 But the special election for Pennsylvania’s 18th District, which became obsolete after the state Supreme Court threw out the old congressional map nearly eight weeks ago, has the nation’s attention. A seat that President Trump won by 20 points teeters on the brink of going blue.

"They’re concerned already about the midterms. This would push it over the edge," he said. "There would be outright panic."

On paper, this shouldn’t even be a contest. Predominantly white, older and working class, district voters sent Tim Murphy to Congress for eight terms without a tough race. The Republican resigned late last year after reports surfaced he urged a former mistress to have an abortion.

Then there’s Republican Rick Saccone, whose lack of a campaign organization, tepid fundraising figures — Lamb has outraised him 5-to-1 — and amateurish social media presence has party insiders — state and national — scrambling to avoid an upset.

An 18-year Air Force veteran, Saccone has played up his foreign affairs experience in counterintelligence and talked up Trump administration issues such as the tax cut bill and immigration. He is known as one of the state’s most conservative lawmakers.

"He’s not a candidate to raise a lot of excitement," Borick said. "He checks all the right boxes. He’s certainly conservative enough for the district, but he’s someone who won’t necessarily draw a lot of energy by himself, and people in the state party know this."

As drawn, the district’s conservative Pittsburgh suburbs and outlying areas are still enough to give Saccone the edge — although Sabato’s Crystal Ball recently downgraded the race from "leans Republican" to "toss-up."

Lamb, meanwhile, has barnstormed the district with a large volunteer door-knocking team while keeping his own party’s leadership at arm’s length. Borick described him as "playing close to the district."

Republicans attack Lamb as a liberal in sheep’s clothing, with many of the ads linking him to House Minority Leader Nancy Pelosi. Lamb maintains he would not support the San Francisco Democrat as caucus leader and runs ads that show him shooting a gun.

Lamb does have some national support, though the figures are a sliver of Saccone’s outside help. The Democratic Congressional Campaign Committee has kicked $300,000 into the race, while Tom Steyer’s NextGen America announced it will put $50,000 to online and field efforts.

"This is a son of southwestern Pennsylvania," Biden said. "He believes in hard work, he believes in labor. He’s not afraid to say the word ‘union.’"

"I’ll work to ensure that our government has the necessary resources to do its job, keep workers safe, and protect our air and water," Lamb said.

"The EPA regulations have struck a major blow to all coal companies," he wrote on his campaign website when he originally planned on challenging incumbent Sen. Bob Casey (D). The website for his congressional race doesn’t mention energy issues.

The seat has an incumbent, GOP Rep. Keith Rothfus, who used to represent the 12th District. The new 17th includes 55.6 percent of the population of the old 12th. Sabato’s Crystal Ball changed its race rating from "safe" to "leans Republican."