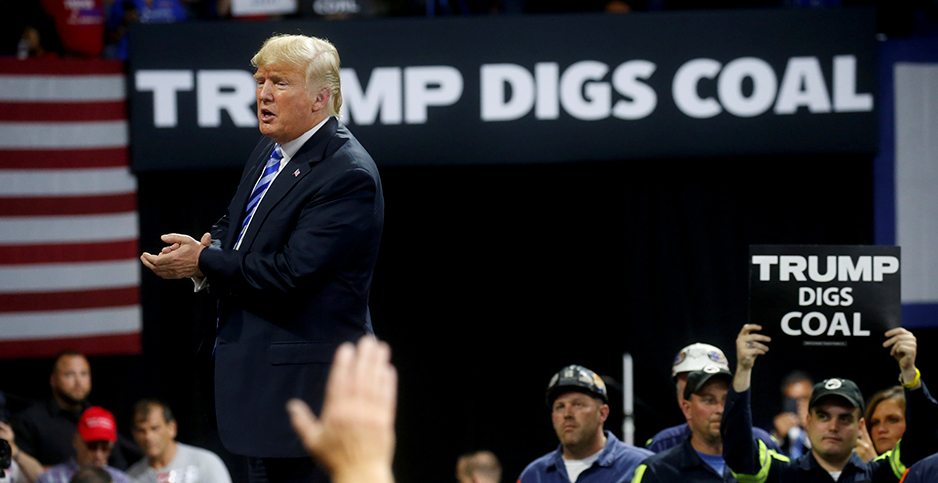 That pitch has been muted by the rise in renewables, an oil crash and a pandemic barring the president from the campaign events that hallmarked his first run.

So what’s Trump’s second-term energy agenda? Fossil fuels remain a big deal for the president, who lambasted Democratic nominee Joe Biden at the Republican National Convention on Monday night for his plan to ban hydraulic fracturing on federal land. But the White House has offered few details on the president’s overall energy game plans.

"I think it would be, I think it would be very, very, I think we’d have a very, very solid, we would continue what we’re doing," Trump told The New York Times in a story published yesterday. "We’d solidify what we’ve done and we have other things on our plate that we want to get done."

While it’s not unusual for an incumbent to be tight-lipped on second-term details when big-ticket items have already been punched, Trump has struggled to articulate what he’d like to do in the next four years, and the Republican Party scrapped a 2020 convention platform, saying only that it would "continue to enthusiastically support the president’s America-first agenda."

Since his first term focused on trashing Obama-era regulations, the next four years would likely be focused on defending policy changes and regulatory overhauls in court. He would continue his push to get the United States out of the Paris climate change accord, but if there’s a Trump plan to address climate, it didn’t come up during the four convention nights.

Energy Secretary Dan Brouillette said the United States under Trump would seek to "maintain our posture as the No. 1 producer of oil and gas." He didn’t offer new initiatives but said the nation would include building more oil and gas pipelines and export facilities.

"We need to continue to build out infrastructure," Brouillette said of the next four years in a Bloomberg TV interview.

More of the same seems to be the central ticket item, but that leaves a lot of potential for a second term, said Mike McKenna, a former Trump energy adviser who briefly led the president’s transition team at the Department of Energy.

The president likes action, and the subtleties of maintaining course may not satisfy his appetite for bigger goals.

"If he comes up with a second term, I think he is going to want to do stuff," McKenna said. "It’s one of those things where his appetite is going to outstrip the capacity of his advisers and staff to recommend new things to do."

Ahead of the convention, Trump’s campaign released a 50-point list of second-term priorities. There was a section on China, promises regarding the U.S. Space Force and continuing to advance a "deregulatory agenda for Energy independence."

"In four years, President Trump ended the expensive, burdensome, job-killing energy policies of the Obama/Biden Administration and led the United States to an energy revolution," Karoline Leavitt, assistant press secretary for the president, said in an email.

If it’s difficult to map what a second term of the Trump administration would mean for energy, some say it’s not a surprise. As one former senior Interior official explained of the dearth of new policy initiatives: "Much of what was on the to-do list when I arrived at DOI has been accomplished already."

"They’re going to continue to move the ball forward," said Tom Pyle, president of the American Energy Alliance, who led Trump’s DOE transition team. "Trump believes strongly that energy production at home is a good thing, that it makes us secure, it gives us soft power around the world."

Pyle said the contrast between Trump and Biden is so stark on energy that "just by getting reelected, you’re not going to spin the whole ship back in the opposite direction."

Many Trump administration moves prompted lawsuits, making defense of deregulatory actions of the first term a likely defining feature of a second term.

Pyle noted challenges to the administration’s decision to roll back Obama-era fuel economy standards and rewrite the definition of which streams and wetlands are subject to Clean Water Act protections as potential high-priority cases.

There’s still work for the administration to do on streamlining the permitting process for projects, he said.

"They’ve made a down payment on it," he said, citing the NEPA rewrite.

But Trump could go for more grandiose policy moves like attempting the controversial move of seeking an inventory of the offshore oil and gas reserves in the Atlantic and Pacific, said McKenna, the energy lobbyist and former Trump adviser.

Trump could try to rein in the federal budget or cap the overall cost of regulations, something McKenna said he pushed for before he exited the administration.

But the president is notorious for lacking interest in some of the details of governing, and that has given broad power to Interior Secretary David Bernhardt and Brouillette, whose careers are built in and around the federal government.

"They are running their own fiefdoms," he said.

Brad Thompson, a Texas-based partner at the Duane Morris law firm whose practice includes the energy industry, noted that a second-term Trump administration that touts traditional sources of energy would likely be forced to balance its ambition with not slowing renewables, increasingly embraced by the market and state governments.

He noted that wind and solar are fast-growing employers in a number of states, pointing to a wind turbine-turned welcome sign in Sweetwater, Texas, at the gateway to the oil-rich Permian Basin.

"Even in Texas, which is certainly known for being an oil and gas capital of America, we are seeing an energy transformation before our very eyes," Thompson said.

He noted that the market is driving the push more than politics, adding that the cheapest new forms of electricity are wind and solar.

"In some ways, far less important to who is in the White House is what are the economics behind this," he said.

Though the administration "has not hesitated to lean on any agency to support what it believes it was elected to do," Thompson said he’d be surprised if DOE revived its failed effort to convince the Federal Energy Regulatory Commission to adopt its effort to subsidize the coal industry.

"The administration also wants to be seen as very pro-business and low-regulation, and if you’re trying to prop up a certain segment that the investment community otherwise wouldn’t drive investment dollars toward, that creates a tension," he said.

If the Trump administration is drawing up action items for a second term, those aims have yet to reach career federal staffers.

"Everything is focused on the short term," said a senior Interior official on the condition of anonymity.

The election has pulled attention from policy and toward winning in November. Both Bernhardt and Brouillette, along with other Trump Cabinet secretaries, have paid visits to and made media appearances, including on conservative talk radio, in crucial swing states in recent weeks.

The Western Energy Alliance, which was a central voice in several high-profile policy shifts on federal land in the first years of the Trump Interior Department, is focused on preparing for a potential Biden presidency, not because it expects one, but because it would mean more work in the courtroom.

A Biden administration would be unlikely to defend Trump-era regulatory overhauls that are being challenged, leaving it to industry groups like WEA, said the group’s president, Kathleen Sgamma, who was a member of Interior’s short-lived Royalty Policy Committee from early in the Trump administration.

She said there are still regulatory changes that need finishing, like the valuation rule being rewritten by the administration right now, but that a hard set of priorities would likely wait.

"I’m sure at some point, we will sit down after the November election and think about a second term," she said.