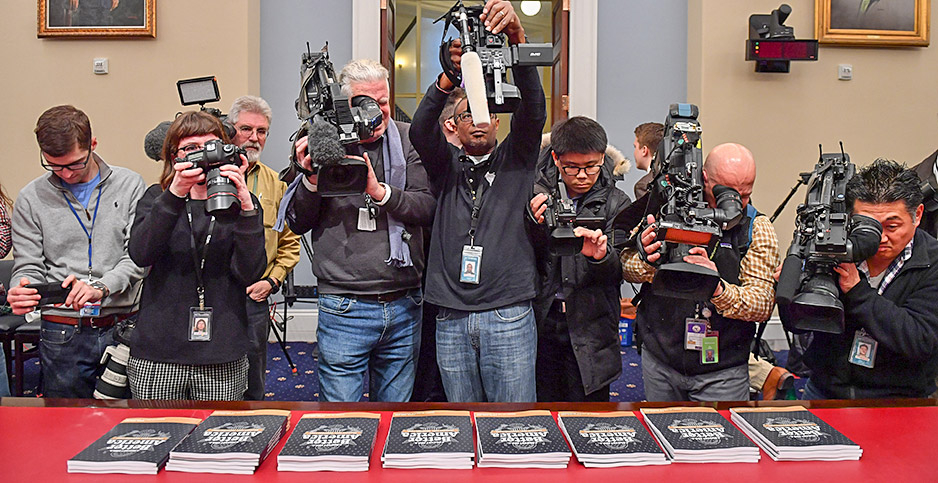 The White House today outlined a $4.7 trillion fiscal 2020 budget that would take an ax to many domestic programs, including at EPA and the Energy and Interior departments, to boost national security spending.

The budget pushes a 5 percent cut in nondefense discretionary spending accounts to $543 billion. Defense spending would spike 5 percent to $750 billion.

"We have a real problem that is not a result of our economic policies," said a senior administration official this morning, pointing to soaring deficits.

Indeed, the administration projects a sea of red ink. The budget would not balance for 15 years. Typically, budget plans balance within a decade.

The proposal also calls for spending $8.6 billion to complete construction of the U.S.-Mexico border wall, a priority sure to reignite a funding dispute with Congress that sparked a 35-day shutdown earlier this year.

Additionally, the budget would renew the administration’s call for $200 billion in infrastructure spending that, combined with private sector and local financing, would amount to $1 trillion for a wide range of projects.

The infrastructure plan is less specific than last year’s, in part to allow Congress to offer up its own suggestions.

The White House released only the broad outlines of its spending plans for agencies today; the more detailed appendix with line-item listings for each agency will be out next week.

The administration official said the $6.1 billion proposed for EPA — down from $8.8 billion — would mean "substantial reductions" for the agency, while allowing the regulator to still meet its overarching missions of clean air and clear water and other environmental protection (see related story).

The official suggested some of the largest cuts would come by asking states and local governments to take over the agency’s regional economic programs.

It says funding priorities will be reviewing and revising regulations, streamlining permitting, and working with state and local partners.

DOE’s $31.7 billion request would prioritize modernizing its stockpile of nuclear weapons and investing in early research and development projects.

Interior’s $12.5 billion request would be about a $500 million cut, although some of those reductions would be the result of changes to mandatory programs in fiscal 2019.

An administration official said $6.5 billion would be specifically marked for rebuilding and repairing infrastructure at national parks (see related story).

Meanwhile, the Agriculture Department’s budget would boost funding for forest management to the highest levels yet, the administration said, including totals of $450 million for hazardous fuels reduction and $375 million for forest products, mainly from national forests.

A budget cap adjustment would provide $2.25 billion for wildfire activities at the Forest Service and Interior, without the need to borrow funds from non-fire-related accounts. Fiscal 2020 will be the first year of a new wildfire funding arrangement approved by Congress.

Lawmakers from both parties already are largely dismissing the budget, saying it stands little chance of advancing on a divided Capitol Hill. Even Republicans stopped short of endorsing it today.

"The president’s annual budget proposal is the first step in the federal budget process and will allow us to consider how his priorities align with the priorities of Congress," said Senate Budget Chairman Mike Enzi (R-Wyo.).

"I look forward to working with my colleagues and the president to curb federal overspending and help bring our deficits and debt under control," he added.

A senior administration official stressed the budget meets strict spending caps for next year that Congress mandated under the Budget Control Act. The official stressed the White House is open to other ideas for meeting those sequester levels but said it’s not affordable to do so by making equal increases in defense and domestic accounts.

"We have put forward one way to continue to rebuild the military. Congress may have another way," said the official.

House and Senate Budget committee lawmakers will weigh in more on the request this week, with acting Office of Management and Budget Director Russell Vought set to testify before both panels.