Trump’s big reorg plan gets a second and third look 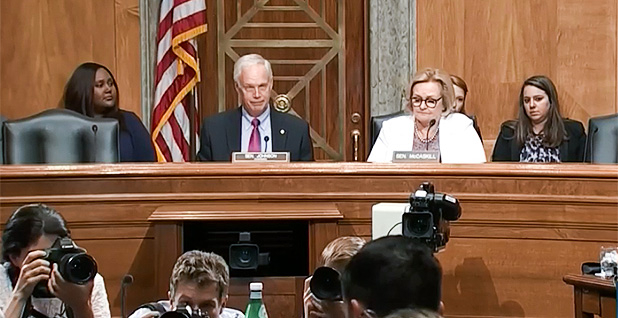 Senators this week will scrutinize the Trump administration’s extremely ambitious government reorganization plan that would amplify the Interior Department’s clout.

"The vast majority of people I ask believe the federal government is badly broken," said Sen. Ron Johnson (R-Wis.), adding he was "so pleased to see this administration thinking big and ‘outside the box’ to bring effective reform and reorganization to a government structure developed for the previous century."

Johnson leads the Senate Homeland Security and Governmental Affairs Committee, which is holding a Wednesday morning hearing. The next day, the Senate Energy and Natural Resources Committee will hold its own hearing, focusing on the implications for the Energy and Interior departments.

While Johnson is a Trump loyalist, panel Democrats are likely to press tougher questions about specific proposals that include merging the Labor and Education departments and privatizing the Postal Service.

The AFGE is the largest federal employee union, representing 700,000 workers.

Spanning 132 illustrated pages, Trump’s reorganization blueprint combines proposals that require congressional approval with others that can be managed administratively. The plan, though, does not specify what’s required for each move to happen (Greenwire, June 21).

"The civilian work of the Army Corps … is very complex, very bureaucratic and has a lot of problems with mission delivery, which is why we proposed reducing the number of agencies involved from three to two," Margaret Weichert, deputy director for management at the Office of Management and Budget, told a House panel last month (E&E Daily, June 28).

The notion of shifting some Army Corps responsibilities to Interior is an old one, with a 1949 federal commission recommending that "any Army engineers who can be spared from military duties be detailed to the Department in positions similar to those which they now hold in the Corps of Engineers."

The proposed 1949 move never came close to happening. Since then, the Army Corps’ roughly $5-billion-a-year civil works program has had more than six decades to become ever-more entrenched where it is.

The Fish and Wildlife Service and NOAA Fisheries would merge within Interior under the plan. This, too, is an old idea. President Obama proposed something similar in 2012, using familiar-sounding language (Greenwire, Jan. 13, 2012).

"The Interior Department is in charge of salmon in fresh water, but the Commerce Department handles them in salt water," Obama said at the time. "No business or nonprofit leader would allow this kind of duplication or unnecessary complexity in their operations. … It has to change."

The plan would also merge the Energy Department’s applied energy offices on renewables, nuclear and fossil energy into one "Office of Energy Innovation." The White House also wants to establish a new "Office of Energy Resources and Economic Strategy."

House members did not mention or raise questions about the energy- and environment-related moves during last month’s Oversight and Government Reform Committee hearing on reorganization.

Those moves, though, will face the heat at Thursday’s hearing of the Senate Energy and Natural Resources Committee, whose members have already blasted a proposal to privatize power marketing administrations.

"This is a bad idea that has been soundly rejected before and will be again," said Sen. Maria Cantwell (D-Wash.), ranking member on the ENR panel.

Schedule: The Homeland Security and Governmental Affairs Committee hearing is Wednesday, July 18, at 10 a.m. in 342 Dirksen.

Witness: Margaret Weichert, deputy director for management at the Office of Management and Budget.

Schedule: The Energy and Natural Resources Committee hearing is Thursday, July 19, at 10 a.m. in 366 Dirksen.