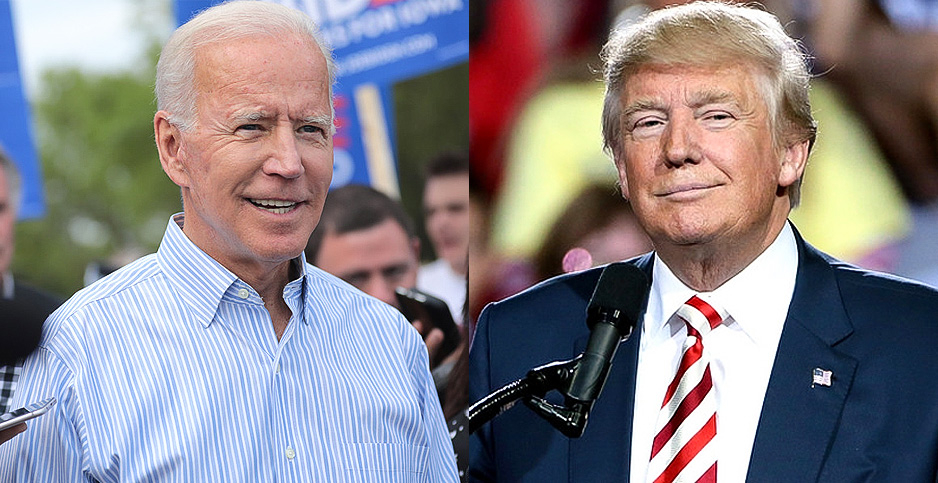 Former Vice President Joe Biden and President Trump. Recent polling has shown that U.S. voters are more split on environmental issues — rather than health care, race relations or the economy — when it comes to their impressions of Biden and Trump. Gage Skidmore/Flickr

One of the widest gaps in how voters perceive the presidential candidates is on environmental policy, even as the nation reckons with a deadly pandemic and an eruption of protests over racial injustice.

Recent polls reveal broad mistrust of President Trump’s handling of environmental issues, suggesting that Joe Biden, the presumptive Democratic nominee, has a large advantage on those issues less than five months before the election.

The gulf between Trump and Biden on the environment is larger than their perceived differences to voters over race relations, the economy and health care, according to recent polling. Those issues are nevertheless expected to be central themes of the November election.

"The president has earned his disadvantage on the environment," said former Rep. Carlos Curbelo (R-Fla.). "In many ways, the challenge of climate change is similar to the challenge posed to the world by the novel coronavirus. Climate change requires international cooperation, bold action, serious sober leadership, and the president doesn’t do well in those scenarios."

Trump was 20 percentage points behind Biden on the environment, with 46% of respondents saying the former vice president would do a better job and 26% saying Trump was better, according to a poll released last week by Research Co. It was conducted as protests began across the country.

That suggests the candidates are further apart on the environment than on race relations (17-percentage-point difference), even though the survey was conducted as protests erupted in cities across the country. Forty-four percent of likely voters preferred Biden’s handling of racial issues compared with 27% for Trump.

Those findings echo a Morning Consult poll released last month. It found a 19-percentage-point gap between the candidates on the environment. The survey said it "dwarfs that of all other issues."

Since Biden became the presumptive Democratic nominee in March, he has led Trump on environmental issues by 17.2 percentage points on average, according to Morning Consult. That gap persisted as the biggest difference between the candidates through five Morning Consult polls conducted between March and May.

Voters trust Democrats to handle climate change better than Republicans by an 18-percentage-point margin, according to a memo released Monday by Data for Progress. The group’s polling found that Biden could strengthen his support among young voters by developing a more aggressive climate platform.

Activists have been pushing him to be more aggressive in combating greenhouse gas emissions from fossil fuels and to strengthen his policies toward helping communities of color grapple with rising temperatures.

"If we are able to turn the 2020 election into a referendum on President Trump and the Republican Party’s very backwards stance on climate change … I really like the terms of that debate," said Julian Brave NoiseCat, vice president of policy and strategy for the progressive think tank Data for Progress.

The number of protests sparked by the death of George Floyd stands to increase the gap in voter preference between Trump and Biden on race, observers said.

That could mean voters who are focused on the environment may shift their focus to police reform, said Michael Fauntroy, a political science professor at Howard University and author of "Republicans and the Black Vote."

"There’s a very limited capacity for the public in even calm times to pay attention to a lot of things at once, and so I’m worried from an environmental policy perspective that the issues that need to be considered in that regard, that candidates need to address, won’t be called on to address because of these more important issues," he said.

Likely voters who tend to be involved in the protests — younger people and people of color — also tend to be involved in climate issues, according to researchers. And the prevalence of the environment as a wedge issue between the candidates has likely been reinforced by the pandemic, said Nathaniel Stinnett, executive director of the nonpartisan Environmental Voter Project.

As the country reveals divisions over following health experts with regard to self-quarantines versus reopening the economy, voters are more likely to see Biden and Trump in starkly different terms.

"It almost seems that the pandemic is actually further clarifying people’s views on the climate crisis and environment issues because their struggle is similar in many ways," Stinnett said. "The pandemic is throwing into sharp relief what it means to create a society that can deal with these enormous public health challenges and accept scientific solutions."

There are still younger voters who can be persuaded to vote in the fall, since neither candidate has won over the younger-than-45 age group, observers said. And while progressives may be motivated to vote for Biden if he strengthens his climate platform, he could also pick up some Republicans, particularly in key states like Florida, where environmental issues are bipartisan, said Curbelo, who was among the most vocal Republican lawmakers on climate issues.

"The issue could make the difference among moderate Republicans, younger Republicans who feel strongly about the need for the government to address climate change meaningfully," he said. "So it’s not just that this is a top issue, it could be the deciding issue in certain states."