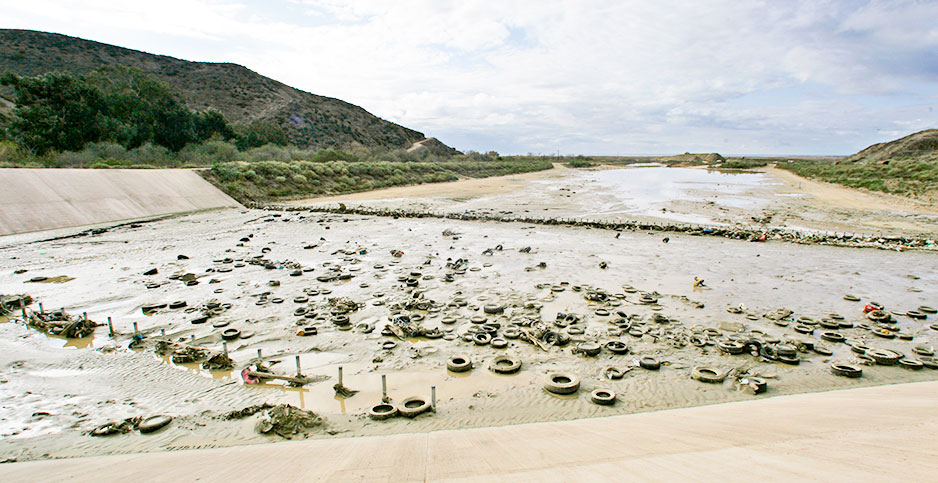 Tires littered a sediment basin leading to the Pacific Ocean from Mexico in Imperial Beach, Calif., in this 2007 file photo. Lenny Ignelzi/Associated Press

President Trump’s proposed border wall will do nothing to fix the biggest problem crossing into the California coastal city of Imperial Beach from Mexico, local officials say.

Millions of gallons of wastewater, sewage and garbage regularly flow across the border via the Tijuana River and discharge into the Pacific Ocean south of San Diego.

The contamination creates a major public health risk and fouls habitat for threatened species. Large swaths of murky brown water are easily seen off the coast during peak flows, and officials have closed beaches more than 160 days in the last two years due to the pollution.

The problem has continued for three decades as the Mexican city of Tijuana has grown at a rate that far outpaces its sewage infrastructure, said Imperial Beach Mayor Serge Dedina.

Dedina has had enough. He recently filed a lawsuit against the federal government for violating environmental laws.

"From the very beginning, we have tried to engage the Trump administration. The biggest homeland security problem in our part of the border is these toxic flows," he said.

“That’s the irony – or tragedy – of this border security frame. They are building a wall we don’t need and ignoring sewage capture we do need.”

"There is no interest on the part of the Trump administration in fixing this problem."

San Diego water regulators have also signaled they intend to sue, and a state senator has introduced legislation calling on California Gov. Jerry Brown’s (D) administration to file a lawsuit against the federal agency responsible for cross-border water pollution.

"Every kind of debris you can imagine" flows across the border into the United States, the bill’s sponsor, state Sen. Ben Hueso (D), said in a recent television interview. "The worst part [is] all the fecal matter and bacteria that comes into our beaches. It’s not something that should be happening, and it can be prevented."

Those efforts have gotten the attention of Mexican officials. This week, Mexico’s National Water Commission pledged $4.3 million to clean up the Tijuana River channel.

But Dedina says the U.S. government should be doing more. For him, the issue is personal. As a former lifeguard, he was plagued for years with ear infections. His kids have ended up in the emergency room after surfing.

He said the Trump administration’s priorities are misplaced. Trump successfully sought $1.6 billion in spending legislation for his border wall but has proposed zeroing out the budgets of U.S. EPA programs for addressing cross-border pollution.

"That’s the irony — or tragedy — of this border security frame," he said. "They are building a wall we don’t need and ignoring sewage capture we do need."

The 120-mile Tijuana River drains a roughly 1,735-square-mile watershed that features canyons and hillside, all of which flow toward the U.S. border.

After crossing into the United States, the river turns west for a mile before meandering through what’s known as the Tijuana River Valley, which is home to various habitats like vernal pools, sand dunes and mudflats.

The river eventually reaches its estuary and the Pacific Ocean at the southern end of San Diego and Imperial Beach.

Sewage contamination, as well as sediment, has long been a problem in the area, said David Gibson, executive officer of the San Diego Regional Water Quality Control Board.

Gibson recalled that in the early 1990s, the river was virtually nothing but sewage, transporting some 14 million gallons per day to the coast.

The United States and Mexico signed an agreement in 1990. Mexico vowed to ensure "that there are no discharges of treated or untreated domestic or industrial wastewater into the waters of the Tijuana River that cross the international boundary."

Since then, water treatment facilities have been built south of the border, he said.

But Mexico has struggled to meet that agreement. Sewage infrastructure has not kept up with Tijuana’s rapidly growing population and development, he said. And there are many populated areas along the border that are not hooked up to the country’s sewer system. Waste from those areas flows untreated into the river system.

During heavy rains, inflows overwhelm the treatment plants. That happened in February 2017, forcing upward of 140 million gallons of sewage to flow through the estuary and into the Pacific Ocean.

Those events have had an impact on the area’s tourism-based economy, said Valerie Acevez, the president of the Imperial Beach Chamber of Commerce.

"It’s starting to affect businesses — more and more people don’t want to come down to the beach," she said. "Mexico just doesn’t think its their problem. That’s the biggest issue."

Jim Peugh, conservation chairman of the Audubon Society’s San Diego chapter, noted that pollution had a devastating impact on the estuary — an important habitat for more than 300 bird species.

It alleges that the agency charged with cross-border water issues, the U.S. International Boundary and Water Commission, or IBWC, has engaged in "ongoing, severe and dangerous violations" of the Clean Water and Resource Conservation and Recovery acts.

The litigation was joined by the city of Chula Vista and the Port of San Diego.

It highlights the February 2017 event and claims that, "unfortunately, pollution events such as the one depicted above have become routine."

The cities and port "have beseeched the federal government through political, diplomatic, regulatory, and administrative avenues to address devastating pollution discharges that injure the plaintiffs and their constituents," the complaint says. "The government has repeatedly failed to act."

IBWC officials referred requests for comment to the Justice Department, which provided a March 1 memo written in response to the San Diego Regional Water Quality Control Board.

The document, written by DOJ Environment and Natural Resources Division officials, says IBWC doesn’t have the authority to administer the remedies the water board is looking for.

"Contrary to suggestions in the Water Board’s letter," the memo states, the IBWC’s role under a 1944 treaty with Mexico "does not make it the agency that, under U.S. Law is responsible for managing transboundary trash, sewage, and sediment discharges from Mexico."

Further, the memo states that the agency cannot commit to projects it has not received funds for through the congressional appropriations process.

The IBWC is designed to work in concert with its sister agency in Mexico and "does not contemplate the sort of unilateral commitments and decisions on infrastructure investments outlined" by the board.

Gibson of the San Diego water board wouldn’t comment on the specifics of DOJ’s letter. But he did say the board is preparing a 60-day notice of intent to sue that will contain its allegations.

"It is safe to say that we do not agree with their interpretation of our communication, or the remedies necessary to protect human health and environment under the Clean Water Act," he said.

"The water board has expectations of the federal government."

In Congress, lawmakers representing the area have taken a different tactic in securing funding.

"EPA’s Border Water Infrastructure Program is unique among federal funding programs," the lawmakers from California and Texas wrote. "It is the only federal program that can fund projects on both sides of the border, with all projects benefiting communities on the U.S. side of the border."

But Trump’s budget proposal called for zeroing it out. Trump has also called for cutting another $3 million program that addresses environmental protection in partnership with border states, tribal governments and Mexico.

"This program is eliminated as part of the effort to limit federal investment in lower priority activities and to focus resources on core environmental work under core statutes," the administration’s budget summary states.

Dedina, the Imperial Beach mayor, said he will seek every avenue possible to address the pollution.

He said he is conducting his own foreign policy, meeting with Mexican officials and attempting to forge some sort of agreement.

"We’ve been waiting for years," said Dedina, who is in his fourth year as mayor. "We’ve done all the right things. We’ve worked with everyone and attempted to work proactively. Nothing has worked."

This current lawsuit won’t be the last one.

"We have a lot more planned," he said. "We are not done with this."