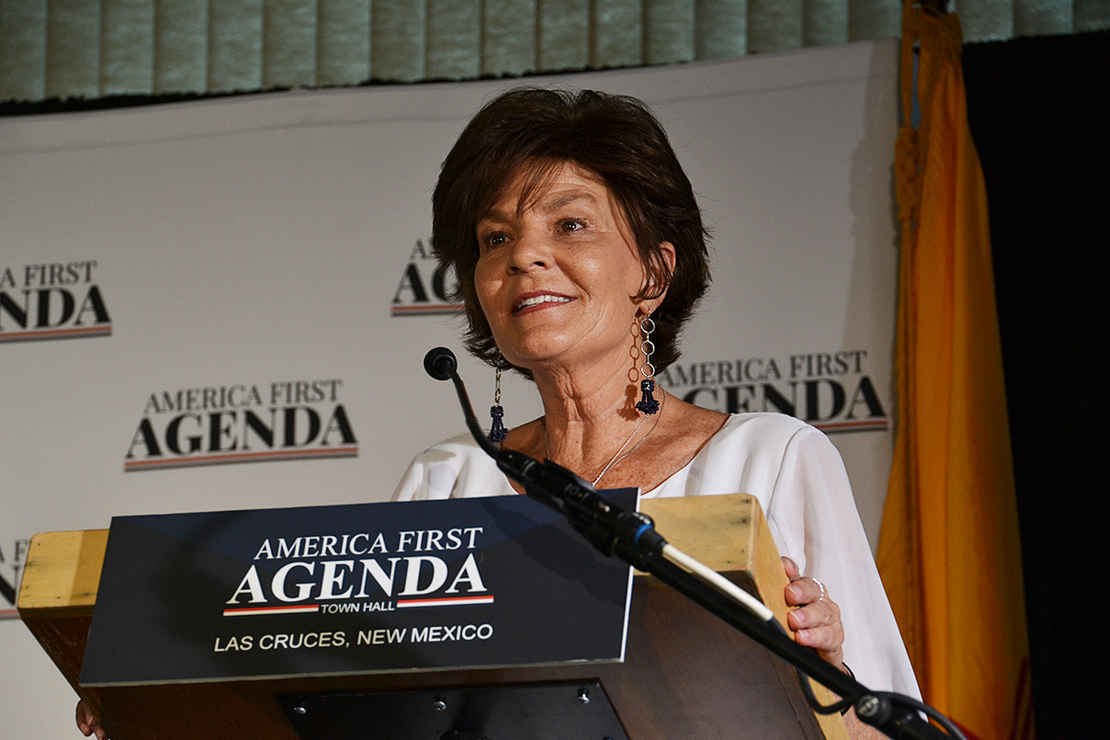 LAS CRUCES, N.M. — Residents of this southern New Mexico city piled into a conference room in the back of a farming and ranching museum after work last month to hear former Trump administration officials and their local congresswoman berate President Joe Biden.

On their way in, attendees shuffled past hats for sale that read “AMERICA FIRST, ALWAYS.” A song called “Bubba Shot the Jukebox” poured through the stereo, and some in the crowd grumbled to each other about the loan forgiveness program Biden had announced earlier that day.

The lights dimmed and a video streamed onto the stage featuring former President Donald Trump touting his “America First” slogan. The line has been adopted by the America First Policy Institute, the group that put on the event.

The town hall was part of a multipronged effort by AFPI to keep Trump’s agenda and dozens of his aides active and ready to hit the ground running when he, or another person who shares his politics, returns to the White House.

The pro-Trump organization hopes, through its 22 policy-focused teams — dubbed “centers” by AFPI — and other initiatives, to have a policy playbook ready for the next Republican administration on everything from energy to civil service overhaul.

With dozens of former Trump personnel on staff and programs like the “American Leadership Institute” designed to train young leaders, the groups could also feed a new GOP administration that’s hungry for personnel as early as 2025, if Trump or another Republican wins the White House.

Veterans of the transition to the Trump administration want to be ready on day one of the next GOP administration, said Marc Lotter, AFPI’s chief spokesman, who worked on Trump’s 2016 campaign and in the White House.

“When we went in the transition into the Trump administration, from a policy standpoint, from a personnel standpoint, we weren’t ready. And we spent a good deal of that first year getting everything together,” Lotter told E&E News in an interview.

Trump spoke at a Washington, D.C., summit held by the group in July (Climatewire, July 26). “My, my, have you come a long way,” he said to the group’s leaders, recognizing Rollins, Kudlow and McMahon. “We had made America great again,” Trump said. “But now our country has been brought to its knees.”

Former Trump EPA head Andrew Wheeler joined the group last year to lead its Center for the Environment. He left when Virginia Gov. Glenn Youngkin (R) tapped him for a job, so AFPI combined that center with its energy initiative.

The general concept of setting up a think tank to shape policies and train personnel for a Republican or Democratic administration has some history.

“Developing policy agendas for current and future administrations is something that think tanks have been doing for decades,” said Lauren McDonald, a California State University, Northridge, professor who has studied the role of think tanks in federal policy.

The conservative Heritage Foundation developed its Mandate for Leadership as a blueprint for Ronald Reagan’s presidency, while the Progressive Policy Institute made similar plans for Bill Clinton.

“Clearly these are people who would be prominent figures in a Trump administration,” Norm Ornstein, a senior fellow emeritus at the American Enterprise Institute, said of AFPI’s roster. “It’s certainly a group to watch closely.”

Much of the discussion centered around immigration, but they also panned Biden’s energy policies.

“I’m sorry, but everybody in New Mexico is not going to run out and buy an electric vehicle next year,” Herrell said, referring to Democrats’ just-passed climate and energy bill that incentivizes electric vehicles.

Whitaker criticized the major Biden-backed climate legislation, which Whitaker said “pretty much undid the EPA versus West Virginia” Supreme Court decision issued over the summer. That decision, penned by a conservative majority, restricted how far EPA could go in regulating greenhouse gas emissions.

Democrats have asserted that the law’s repeated references to greenhouse gases as air pollutants give EPA more solid legal footing to pursue regulations, even after the Supreme Court decision (Climatewire, Aug. 24).

“That’s of course their solution,” Whitaker said of the Democrats behind the bill dubbed the Inflation Reduction Act. “Not only does it produce less energy, it also raises your costs, so it’s raising prices instead of lowering them,” he said.

Whitaker also slammed Biden’s student debt relief program, calling it a move to appease the Democratic base of “woke, young liberals who can only be a barista at Starbucks because their diploma at the university that they overpaid for can’t get them a real job.”

That’s not to say, he added, that “the barista at Starbucks isn’t a real job. You just don’t need a college degree to do it.”

Perry assailed the costs of high gas prices on the call and accused the Biden administration of “worshiping at the altar of the Green New Deal” and refusing to extract fossil fuels that are “right under America’s feet.”

“The current administration is either completely inept about what the solution set is, or they’re happy to see this happen, because what they’ve done is really double down,” Perry said of high energy prices. “Every single policy, from canceling the Keystone pipeline to canceling drilling contracts, has served to increase the price of energy.”

AFPI is working to both develop and push what it sees as the “America First” solution to those issues. It’s doing that in the town halls and at its major summit in Washington this summer. It’s participating in litigation, like with a brief it filed in the West Virginia v. EPA litigation, and writing papers making arguments such as that the Biden administration should stop prioritizing the climate change fight on the international stage and should instead double down on fossil fuel exports.

“We’re discussing all of the positive attributes of what energy independence means,” said Sam Buchan, director of AFPI’s energy and environment center and a former adviser to Rick Perry when he was Energy secretary.

“Obviously we have a successful frame of reference from the previous administration. So how do we replicate that and move beyond that to areas we didn’t have an opportunity to address?” he asked. “First and foremost, that’s going to be about greenlighting permitting in a responsible but efficient way. And also modernizing our regulatory environment so that we’re not stifling innovation on the front end.”

One major initiative AFPI is undertaking is joining other conservatives in fighting against environmental, social and governance investing.

A recent paper on the issue the group published by Michael Faulkender, a Treasury Department official under Trump, argues that under Biden, “the liberal elite has now taken the reins in many corporate boardrooms, and average American investors have lost control over their retirement finances.”

Another policy priority for the group — and one that’s a big concern for some federal workers — is the group’s plan to “fight government corruption by draining the swamp.”

That’s topic No. 10 in the handbook the group is passing out, and it calls for reforming the civil service “to create accountability in the bureaucracy.”

At the end of Trump’s term, he signed an executive order to make it easier to fire federal employees. Biden rescinded the move, but Trump suggested he’d bring the plan back in a recent fundraising email. “When I was in the White House, I took executive action with Schedule F to make it possible to fire federal employees who are bypassing our democracy to advance wokeism and corruption,” the email said (Greenwire, Aug. 15).

AFPI and its advocacy-focused affiliate that is helping organize the town halls, America First Works, are both nonprofits, so they aren’t obligated to disclose their donors.

And they are technically nonpartisan, despite being packed with Trump alumni.

“If you’re a Republican or conservative or even, look, if you’re on the left … we talk to everyone,” Wolf, the former Homeland Security secretary, told the audience in Las Cruces.

“Or even an open-minded liberal,” Whitaker interjected, drawing laughs from the crowd.