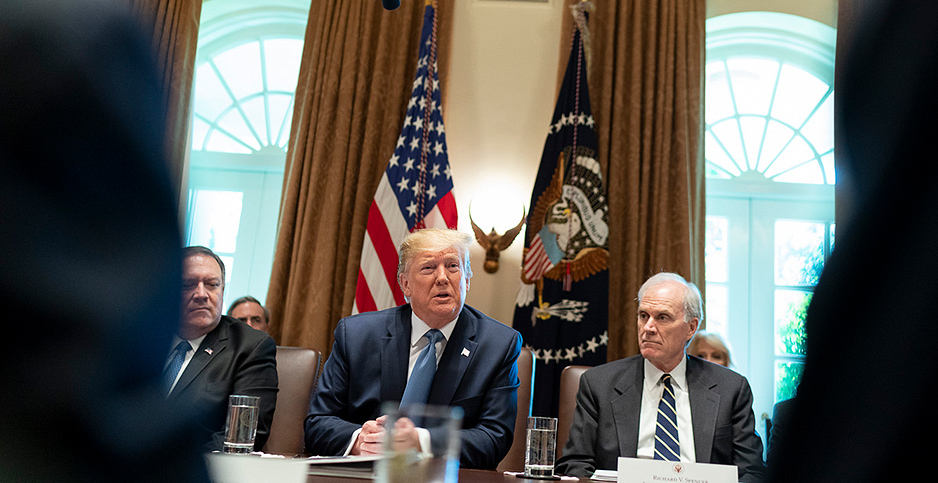 President Trump has altered political norms on the environment. But it's unclear how long those changes will remain in place. Shealah Craighead/White House/Flickr

The Trump administration’s attempt to overhaul the way EPA does science may not have a long shelf life.

Many science advocates and past leaders of EPA’s expert advisory panels say the panoply of executive orders and guidances President Trump and his EPA administrators have issued over the past 2 ½ years — to sideline critical scientists, change how the benefits of rules are evaluated and blunt scientific messages — will dissolve as soon as a new president with a different philosophy enters the Oval Office.

"All of these things collectively have been very damaging," said Christopher Frey, a former chair of EPA’s Clean Air Scientific Advisory Committee (CASAC) who served on its Scientific Advisory Board (SAB) until 2018. "But they’ve been done by a flick of the pen by the administrator, and another administrator could flick their pen and do away with that."

EPA Administrators Andrew Wheeler and Scott Pruitt have proposed sweeping changes to internal policies for how EPA supports and uses science. Even as they quarterbacked the repeal of Obama-era rules for methane, carbon dioxide and mercury, the two men led a multipronged effort to weed out the science and scientists those rules depended upon. Their efforts have touched the role and composition of EPA’s advisory panels, the way rules are written and justified, and EPA’s traditional role as a major funder of research at institutions across the United States.

The issue has given EPA science a relatively high profile on Capitol Hill. Several House committees held recent hearings on the issue, while a pair of Senate Democrats unveiled the findings of a Government Accountability Office report that showed EPA diverged from its own guidelines in choosing and vetting members for CASAC and SAB (Greenwire, July 15).

All the politics is bad for EPA’s scientific integrity, said Thomas Burke, an Obama administration science adviser who testified before a subcommittee of the House Science, Space and Technology Committee on Tuesday (E&E Daily, July 17).

"If you’re going to change policy, well, call it what it is, but don’t undermine and destroy the scientific capacity of our nation to understand environmental health effects and to protect public health," he told E&E News after the hearing.

Most of Pruitt’s and Wheeler’s changes to EPA science norms, though, haven’t gone through a regulatory process, and critics say they would be relatively easy to reverse. The few formal rulemakings — like the controversial proposal to bar EPA from basing rulemakings on scientific studies if the underlying data has not been made public — could be ignored or reinterpreted by a future administration while it took prescribed steps to roll them back.

Expert panels that the Trump EPA has stocked with more industry-backed consultants could be disbanded and repopulated with researchers from academia, observers said.

"Virtually nothing this administration does to harm science or roll back standards will be legally or politically durable, because future administrations can reverse and reject those Trump EPA steps," predicted John Walke, clean air director for the Natural Resources Defense Council.

But other experts warn that another two to six years with no EPA support for climate science and other topics could stunt U.S. research capacity in the longer term. Senior scientists who have fled EPA or been dropped from advisory panels might not be easily enticed back.

"We did lose a lot of institutional knowledge, so on the advisory committee front, I think it would just take a long time to build it back up," said Gretchen Goldman, research director at the Union of Concerned Scientists’ Center for Science and Democracy.

She said the changes made under Trump to important rulemaking norms and methodologies may also linger into the next administration. Others agree the moves Trump is making now could take years to reverse.

"You can get back what may be lost now or what may be lost in the next few years, but it will take time," said Deborah Swackhamer, a former chair of EPA’s Board of Scientific Counselors. "You can’t get back senior scientists immediately. You have to start by rebuilding the postdoc program and then rebuilding the mid-science-career people in order to do that."

In particular, Pruitt and Wheeler have heavily targeted so-called co-benefits — cuts to hazardous pollutants, especially fine particulate matter, that occur as a result of rules for other pollutants. Particulate matter, or PM2.5, is linked to respiratory and cardiovascular illness and death. Reductions in fine particles helped the Obama EPA show that tens of thousands of avoided deaths would result from policies like its Clean Power Plan for carbon dioxide or its mercury rule for power plants.

Steve Milloy, who runs JunkScience.com, a website focused on undermining climate science, helped write EPA’s science playbook as a member of Trump’s transition team. PM2.5 was "weaponized" under the Obama administration, Milloy said, to justify a host of regulations for unrelated pollutants he views as economically damaging.

"The Obama administration, its war on coal, its ozone rules, all of these major rules depended on the notion that PM kills people, it kills lots of people," he said.

So Pruitt and Wheeler have worked to put some of the most important studies on PM2.5 off-limits for future regulations.

Their efforts revolved around the "Strengthening Transparency in Regulatory Science" rule, which could be finalized later this year and would bar EPA from supporting its rulemakings with peer-reviewed research for which underlying data isn’t made public. It would apply retroactively to existing rules.

The requirement is presented as an effort at transparency, but it’s a barrier for studies like Harvard University’s 25-year-old Six Cities study, which established serious health consequences for PM2.5 and has frequently been part of the basis for PM standards and co-benefits in other rulemakings (Climatewire, Aug. 6, 2018). Researchers collected personal data from individuals and assured them it would be kept private.

"That study has been reevaluated, and those types of studies have been done virtually all over the world to show the effects of air pollution," said Burke, who oversaw EPA’s Office of Research and Development under the Obama administration. "But that is often seen as the study in the crosshairs and an example of the study where particularly the coal industry and industries that are concerned about particulate air pollution really want to discredit."

Walke said EPA failed to identify any statutory authority for the rule. He predicted it wouldn’t survive a court challenge.

EPA has also floated changes to the way co-benefits would be counted toward the cost-benefit analyses for rules. So far, the agency hasn’t initiated a formal rulemaking for co-benefits, but some industry advocates have urged it do so. Milloy suggested it could be added to the final version of the "secret science" rule.

Climate science itself has also been a target, especially for Wheeler (Climatewire, June 10). The administrator continues to argue that the modeling underlying last year’s National Climate Assessment by researchers at 13 government agencies led to inappropriately dramatic headlines.

"We’re reexamining the models that the government is using and trying to make sure that we take away more of the uncertainties so that people understand better what is going to happen in the next 50 to 100 years," he recently told reporters. EPA did not respond to further inquiries.

Wheeler and his predecessor have also taken steps to change the composition and role of EPA’s advisory panels — especially SAB and CASAC, which has a congressionally mandated role in Clean Air Act rulemakings. Pruitt banned researchers who received EPA grants for their work from participating in the agency’s 22 committees — a change critics say was calculated to boost the number of industry-backed consultants on the panels.

"It’s very clear that what Pruitt was after was to get rid of national independent scientists so he could stack these boards with either cronies or with people who really don’t have this expertise," Frey said. "It’s pretty clear that the political appointees at EPA view objective science as a threat to their ideological agenda."

EPA has circumvented these committees on the "secret science" rule and revisions to ozone and PM2.5 standards, a fact Walke says could add to its vulnerability to legal challenge.

Milloy shrugged off questions about the fate of the science policies he helped develop.

"If these changes get made and there’s backsliding at EPA, that will be raised, and there will be a focus on backsliding," he said. "I don’t know what else you can do other than that."