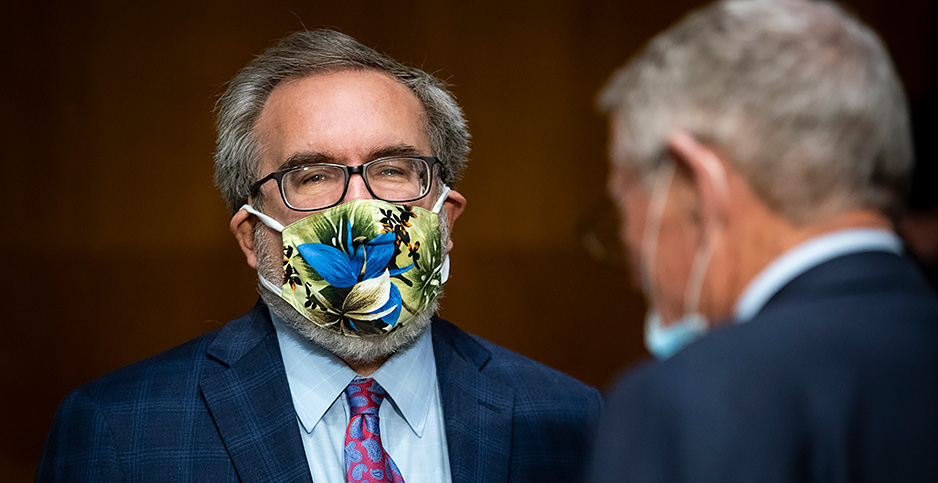 EPA Administrator Andrew Wheeler is seen testifying before the Senate in May. He unveiled rules yesterday easing restrictions on methane emissions. Al Drago/CNP/AdMedia/Newscom

The move marked the culmination of a 3 ½-year struggle by the Trump administration to undo emissions rules established at the end of President Obama’s second term. That removal came despite their being supported by a significant segment of the oil and gas industry.

"Today’s regulatory changes remove redundant paperwork, align with the Clean Air Act, and allow companies the flexibility to satisfy leak-control requirements by complying with equivalent state rules," Wheeler told a local audience, according to remarks provided from EPA after the event.

Early in the Trump administration, officials tried to kill the rule with a Congressional Review Act resolution and then through litigation. But in the end, it was forced to complete a full rulemaking.

The rules replacing the Obama standard provide laxer requirements for how new and modified oil and gas production and processing operations must find and repair methane leaks, a significant contributor to climate change. Owners of transmission and storage infrastructure, which faced requirements under the Obama rule, are exempted from the standard.

The new rules are designed to ignore climate considerations and put future rules for older, leaky infrastructure out of bounds forever.

Finally, in a move that environmentalists promised would be litigated, the rules try to frustrate potential plans to regulate pollutants from new source categories by demanding that they first undergo a special "significant contribution" finding.

A senior EPA official told reporters yesterday that the Obama administration erred in not doing such a finding when it promulgated its rule in 2016 — one reason that transmission and storage must now be exempted from regulation.

EPA did make a "significant contribution" finding for methane from oil and gas facilities in 2016 as part of its rule. Oil and gas is the largest industrial source of methane emissions in the United States.

The EPA official said that the agency would soon release criteria for what must be included in significant contribution findings.

Environmentalists said there was no justification in the Clean Air Act requiring EPA to complete such a finding before promulgating a rule.

"It seems like the EPA is trying to make it more difficult to regulate greenhouse gases in the future," said Sarah Smith of the Clean Air Task Force.

Smith’s colleague, attorney Jay Duffy, noted that EPA didn’t include its position on requiring the finding in the 2019 draft rule for new sources — a fact that might earn a rebuke in court.

The first lightened requirements for oil and gas producers and processors related to monitoring and repairing leaks. The most important change provided a total exemption for low-producing wells that yield 15 barrels of oil a day or less.

But Peter Zalzal, an attorney with the Environmental Defense Fund, said his group’s research shows that low-producing wells could still leak significant quantities of methane into the atmosphere.

"What science and what the data shows us is that those wells can have emissions that are as high as high-producing wells, and oftentimes, those wells have loss rates that are even greater," he said.

Since most U.S. well pads are low-producing, the exemption could substantially undermine emissions reductions under the rule.

High-producing wellheads and compressors would be required to monitor and fix leaks semiannually, down from quarterly under the Obama rule.

Methane can be captured as a byproduct of addressing VOCs for production and processing of oil and natural gas. But targeting VOCs allows EPA to exempt transmission and storage facilities from regulation even though both are significant sources of methane.

It also allows the Trump administration to argue that, because no rule for new oil and gas sources of methane has been promulgated, EPA doesn’t trigger Clean Air Act requirements for proposing rules for older infrastructure that would be free from regulation indefinitely.

Ellen Kurlansky, who served as a policy analyst and adviser in EPA’s Office of Air and Radiation for two decades before departing in 2018, said Trump’s deregulatory agenda would take years to reverse.

Still, the fact these rulemakings are final in the second half of 2020 means that if Biden, the presumptive Democratic presidential nominee, defeats Trump in November, his administration might have some options to reverse the rule more swiftly. A Democratic-controlled Congress could invalidate it through the Congressional Review Act, or the new administration could decline to defend it in court.

Environmentalists warn that yesterday’s action could have an immense impact on the climate.

Methane, which accounts for about 10% of man-made U.S. greenhouse gas emissions, is more than 80 times as climate-forcing as carbon dioxide over a 20-year period.

While EPA has touted reductions in methane using data provided by producers, a report published in Nature last month showed global methane at an all-time high, with U.S. gas production playing a role.

The Environmental Defense Fund estimates that yesterday’s rules will result in an additional 4.5 million metric tons of methane annually compared with the Obama regime they replace. That would have the same impact on the climate as having 100 more coal-fired power plants each year, EDF said.

While oil majors had urged EPA to keep federal methane rules in place, independent oil companies and the trade groups that represent them applauded yesterday’s rulemaking.

Lee Fuller, executive vice president of the Independent Petroleum Association of America, called the technical rule "important corrections that are necessary to address flawed programs resulting from the politically driven rush to complete the 2016 regulations."