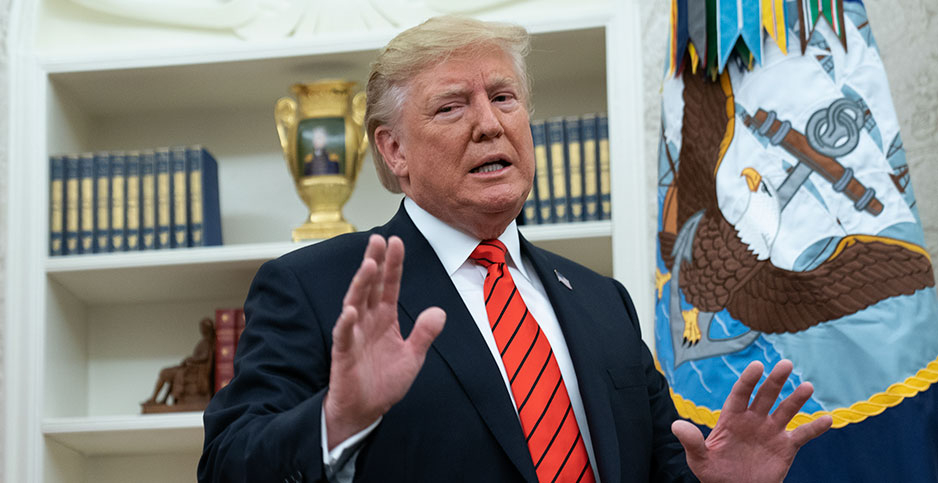 President Trump’s embrace of a conspiracy theory asserting that Ukraine and Democrats hacked the 2016 election, instead of Russia, reflects the way he views climate change, according to researchers: Embrace the favorable false claims and reject the facts.

Trump has repeatedly dismissed the established body of science showing that humans are warming the planet over the past 200 years at a rate that alarms experts. Instead, he has claimed that climate change is a "hoax" invented by the Chinese, asserted that winter weather disproves climate change and accused scientists of falsely creating alarm around the issue. A fake Time magazine cover from the 1970s that promotes "global cooling" appeared on his desk in the Oval Office.

Trump has a history of embracing conspiracy theories if they fit his worldview or advance his agenda, observers say. They point to his fixation with the Obama birther conspiracy and his repeated claims that Russia didn’t interfere with the 2016 presidential election.

It comes as Trump and Rudy Giuliani, his personal lawyer, are using similar rhetorical techniques to discredit former Vice President Joe Biden, said Robert Brulle, a Drexel University sociologist who studies climate denial. Their false claims that Biden tried to fire a Ukrainian prosecutor in order to protect his son Hunter Biden can create public doubt and diminish the weight of factual evidence, Brulle said. There’s no evidence that Biden took action to protect his son from an investigation into an obscure natural gas company in Ukraine that sought Hunter Biden out to sit on its board.

"The point is that there is a pattern here. Over and over and over again, you see the same kind of embrace of these outlandish theories, the delegitimization of things that should be taken for granted as facts," Brulle said. "Since they can’t attack the facts directly, they do it by innuendo and by trying to raise doubts and saying further investigation is needed."

As the impeachment inquiry into Trump begins in earnest, the president continues to push a debunked conspiracy theory that claims Ukraine interfered in the 2016 election to hurt his chances of winning. The U.S. intelligence community found that Russian hackers worked to benefit Trump’s campaign. To Trump, the opposite is true: Yesterday he claimed that his campaign was the victim of election malfeasance by the Democratic National Committee and Ukraine.

"There was a lot of corruption having to do with the 2016 election against us, and we want to get to the bottom of it," Trump told reporters in the Oval Office.

Trump has shown support for similar theories about climate change. In June, he claimed that scientists intentionally reworked the messaging around climate change to make it appear scarier, a popular talking point among those who reject climate science.

"It used to be called global warming, that wasn’t working, then it was called climate change and now actually it is called extreme weather," Trump told British television host Piers Morgan.

Joe Uscinski, a professor who studies conspiracy theories at the University of Miami, said Trump often framed his candidacy for president in opposition to a conspiratorial "deep state." Now he’s using the same language to discredit an anonymous intelligence officer who submitted a whistleblower complaint to Congress after learning that Trump asked Ukrainian President Volodymyr Zelenskiy to investigate Biden and his son. Tying the whistleblower to the deep state is a way for Trump to remind voters why they liked him in the first place, Uscinski said.

The strategy — which he also deployed against Robert Mueller and his investigation — echoes efforts by the fossil fuel sector in the 1970s and ’80s to discredit scientists warning of climate change, Uscinski said.

"And that shows you how powerful conspiracy theories can actually be, because you change the game from arguing about data and evidence from authoritative sources — to all of a sudden, nothing matters," he said. "And now we’re debating whether there is such a thing as data and authoritative sources."

Uscinski noted that one difference from the climate fight is that an entire industry doesn’t hinge on the outcome of impeachment. Unlike the fossil fuel sector, he said, "there is no deep state lobby."

Trump has sometimes appointed people to high-level federal jobs who see climate change through a conspiratorial lens. William Happer, the former National Security Council senior director, blocked the congressional testimony of a climate analyst with the State Department who identified the risks it poses to Americans. The testimony of Rod Schoonover, the former analyst, relied on mainstream research, but Happer said that "a consensus of peer-reviewed literature has nothing to do with truth."

Happer, who is the only person that E&E News has identified to brief Trump on climate science, criticized surface temperature data cited in Schoonover’s testimony and claimed climate scientists purposely altered it to exaggerate global warming. "It has been fiddled with to reduce recorded temperatures of early years and to increase temperatures of recent years in order to give the appearance of alarming warming," Happer wrote.

Happer also suggested that scientists have an incentive to promote "climate alarmism" because they would risk losing research funding if climate change wasn’t a threat.

The Trump administration’s approach to climate change and the Ukraine scandal reflects a tactic used more broadly by the Republican Party, said Jerry Taylor, president of the Niskanen Institute. Taylor, who was once a climate science critic and now works on bipartisan solutions to climate change, said it’s an attempt to avoid or weaken unfavorable facts.

"There’s a lot of common denominators there, a shoot-the-messenger storyline where rather than looking at the arguments on the merits, we have a long dissertation with regards to what the incentives are for scientists to argue X, Y or Z on the climate front. Similarly what are the incentives for ‘deep state actor’ to say X, Y or Z with regards to this particular crisis," he said. "But that cuts across not just the climate crisis, but modern Republican politics these days."