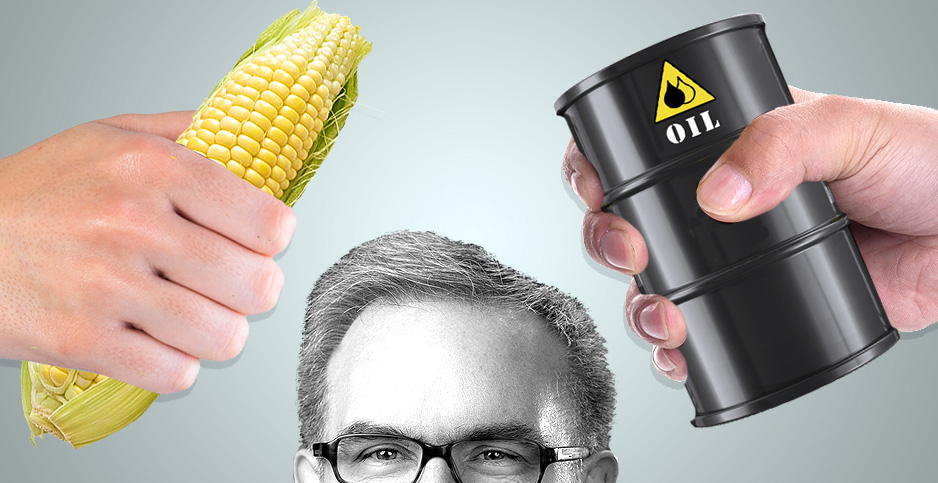 President Trump is expected to follow through soon on a big promise to Corn Belt states, leaving his EPA chief to broker a politically risky deal with the oil industry.

The Trump administration is likely to announce a new policy in the coming weeks to allow gasoline blended with more ethanol to be sold year-round, several sources told E&E News. It’s a move that’s long been pushed by biofuel makers and GOP lawmakers from corn-growing states, many of whom are facing tough re-election races in the fall.

The likely change has thrown acting EPA Administrator Andrew Wheeler into the middle of a battle between the oil and agriculture industries at a time when Wheeler is rumored to be looking for a nomination that would allow him to shed his temporary title.

"Any EPA administrator is going to be trying to find a delicate balance between two interests that can’t both be accommodated," said Janet McCabe, who led EPA’s air office at the end of the Obama administration.

Corn growers and biofuel makers have long advocated for allowing retailers to sell gasoline that contains 15 percent ethanol during the summer months, when fuel demand is highest. But oil companies oppose the move mainly because it would reduce gasoline sales and point to the potential for so-called E15 to damage some types of engines and increase smog.

Trump, however, has already made clear to corn-loving Iowa voters where he stands on the issue.

"I am very close, I have to tell you, to pulling off something that you have been looking forward to for many years, and that is the 12-month E15 waiver," he said in July at a workforce development roundtable in the Hawkeye State.

Now Trump or one of his top officials is planning to visit Iowa or Indiana to detail an EPA proposal that would issue a Clean Air Act waiver, which could clear the way for year-round sales of E15 beginning as soon as next summer, according to sources close to the administration. Bloomberg first reported Trump’s expected announcement.

The biofuels industry and its congressional supporters are strongly in favor of the likely move, which would help blunt the impact of protectionist Trump administration trade policies that have depressed the price of American-grown corn.

"Farmers and biofuels producers alike are looking to their elected officials for help and assurance that things are going to get better," Cooper added. "Certainly approving the use of E15 year round would be one way to do that in the short term."

Meanwhile, Wheeler and EPA are trying to work out a deal with refiners that would tamp down their anger about the change.

One option would be changes in the market for blending credits known as renewable identification numbers, or RINs. Refineries that don’t blend ethanol buy the credits to comply with the renewable fuel standard, or RFS, an EPA program intended to combat climate change that requires the use of set volumes of biofuels.

But the oil industry doesn’t think that’s nearly enough and would probably challenge any such change in court. The industry wants to "sunset" the RFS by 2022, meaning the blending mandates would end then unless Congress renews them.

Refiners have been pressing for a comprehensive legislative fix to the program, and they fear Trump’s E15 move would take the pressure off.

"Pulling the rug out now puts a damper on RFS legislative reform down the road," said Frank Macchiarola, downstream director at the American Petroleum Institute, or API. "Pushing more E15 into the fuel mix makes no sense."

After largely staying out of the 2016 presidential election, the oil industry has bonded with Trump and his administration. Oilmen have showered Trump with praise for cutting regulations and preaching the gospel of "energy dominance."

The president’s move to help corn states and the ethanol industry could test that relationship, although the industry has many additional policy priorities that the administration is likely to pursue.

API, the oil industry’s most powerful trade group, has been running ominous-sounding advertisements, addressed to "Mr. President" on cable TV and online. They focus on the problems E15 can cause for some engines. Yesterday, API and the American Fuel and Petrochemical Manufacturers sent Trump a letter urging Trump not to expand E15 sales and instead work toward a broader plan.

The E15 expansion, the groups said, is "insufficient for refiners and inconsistent with your long-standing commitment to finding a solution that meets the needs of both the biofuels and refining industries"

EPA has been offering increased transparency for the blending credits market through position limits and time limits, according to an industry source.

But refiners say they’re not in the mood for cutting deals. Geoff Moody, vice president of government relations at AFPM, said there are many other problems with the program his members want to see fixed.

"The president has been talking about a policy that’s win-win," Moody said. "We’d like a broader look at how things fit together."

On the other hand, the Renewable Fuels Association would welcome a proposal that is all gain and no pain for the ethanol industry.

"It’s our position that the oil industry has already gotten everything they could have possibly dreamed of from this administration," Cooper said. "So we’re thinking it’s not out of order to be asking for year-round E15 sales as a stand-alone measure."

The oil industry and the Obama administration didn’t agree on much. But both thought EPA lacked the legal authority to administratively expand E15 sales, which could pose a problem for any rules Wheeler issues.

"This administration has shown that it can reverse course on legal and certainly on policy interpretations," said McCabe, Obama’s air chief.

A refining industry source expressed doubt that Wheeler’s team would be able to put together a deal that would satisfy refiners while allowing Trump to do what he wants to do. The refining industry isn’t united on what it wants, and some of the things that refiners want are as legally problematic as the E15 change.

But refiners blame Agriculture Secretary Sonny Perdue and White House political aides for the potential E15 change rather than Wheeler, the source said. So the E15 change probably wouldn’t come back to bite him in a confirmation process, should he be nominated for EPA administrator.

"Andy is a friend of ours," the source said. "We understand he’s doing what he’s been told."

Refining lobbyists are fearful that Sen. Chuck Grassley (R-Iowa), a corn and ethanol booster who also chairs the Judiciary Committee, will have significantly increased political capital if he is able to push Brett Kavanaugh’s troubled Supreme Court justice nomination through the committee.

The oil industry’s congressional allies aren’t ready to give up the fight against E15. Asked yesterday whether the EPA policy change will happen, Pennsylvania Republican Sen. Pat Toomey said, "That’s an open question."

If the agency does move to allow year-round sales, Toomey said, he hopes EPA will also ensure there are mechanisms to keep the costs of biofuel blending credits low. "They should be married," he said.

Sen. Jim Inhofe (R-Okla.), a longtime opponent of the RFS and Wheeler’s former boss, called the idea of an ethanol expansion "concerning" in a statement to E&E News.

"I don’t think it should be approved," Inhofe added. "If it is, I doubt it would survive court challenges."

Environmentalists find themselves in the rare position of being aligned with Big Oil on ethanol issues, because of the volume of water and pesticides used in corn production, along with other issues, said Andrew Linhardt, the Sierra Club’s deputy legislative director for transportation.

But they’re not expecting a seat at the table as the Trump team hashes out a plan and doubt that EPA can strike a workable compromise.

EPA’s press office declined to comment for this story.

In July, Wheeler said EPA’s responsibility is "to follow the letter of the law" when it comes to balancing the priorities of farmers and the oil and gas sector. "We’re going to follow both the letter and the spirit of the RFS program," he told E&E News.

The bitter battle between corn and oil is nothing new, and the political fight flares up periodically as EPA implements the RFS created by Congress in 2005.

Corn-state lawmakers — including Grassley and fellow Iowa Republican Sen. Joni Ernst — are among the most vocal proponents of increasing ethanol in gasoline supplies. In the opposing camp are politicians from refinery-heavy states, like Toomey and Sen. Ted Cruz (R-Texas).

The two sides have already tangled on the issue since Trump took office. Former EPA Administrator Scott Pruitt drew the ire of the corn-state lawmakers by granting waivers to some refineries that exempted them from meeting renewable fuel obligations under the RFS. The White House has convened meetings with the warring factions in a failed bid to find common ground.

Despite the biofuel industry’s comparatively smaller size, it has resisted Big Oil pressure because supporters have shown they’re willing to go to the mat to protect the RFS.

For instance, Senate Republicans stalled a vote on EPA air chief Bill Wehrum last year as Ernst argued she wasn’t comfortable with EPA’s renewable fuel policies (E&E News PM, Oct. 17, 2017). She was also among the Republicans who publicly criticized Pruitt ahead of his July resignation, and their biofuel disputes likely didn’t help that relationship.

"Would I like to see him gone? Yes, I would," she told E&E News in June as Pruitt’s ethics scandals mounted (Greenwire, June 15).

Wheeler hasn’t been nominated for the EPA job, but many sources speculate he’d like to get the nod from Trump.

"I think Andy wouldn’t be there if he wasn’t ready to get confirmed," the refining industry source said.

Wheeler stands to have a friendlier relationship with Ernst than his predecessor, particularly if the administration follows through on the E15 waiver. That wouldn’t hurt his prospects for possible Senate confirmation.

"If the waiver goes through, I’d be more likely to support Wheeler," she told E&E News yesterday in an interview. "I think we need E15 year round. It would be very good for our farmers, very good for renewable fuels and good for the nation as a whole."

The E15 waiver is "the holy grail for Grassley and Ernst," said an industry attorney who represents refiners.

The move could potentially strain the relationship between Wheeler and oil-state Republicans. But Wheeler is unlikely to suffer politically if Trump indeed moves to grant the ethanol waiver, said the industry attorney who represents refiners.

"Wheeler is a stand-up guy. He’s very process oriented, and if the president decides to issue a regulatory E15 waiver, I don’t think people are going to personalize it to acting Administrator Wheeler," said the industry attorney.

In addition to appeasing Corn Belt lawmakers, political observers say, a move to grant the ethanol waiver could help Trump and his allies win some races in the Farm Belt.

"The refining sector districts in Pennsylvania have tighter margins than the farm state districts do," said Segal, who represents many fossil fuel companies. "And they are in a state far more instrumental as a battleground in the last election."