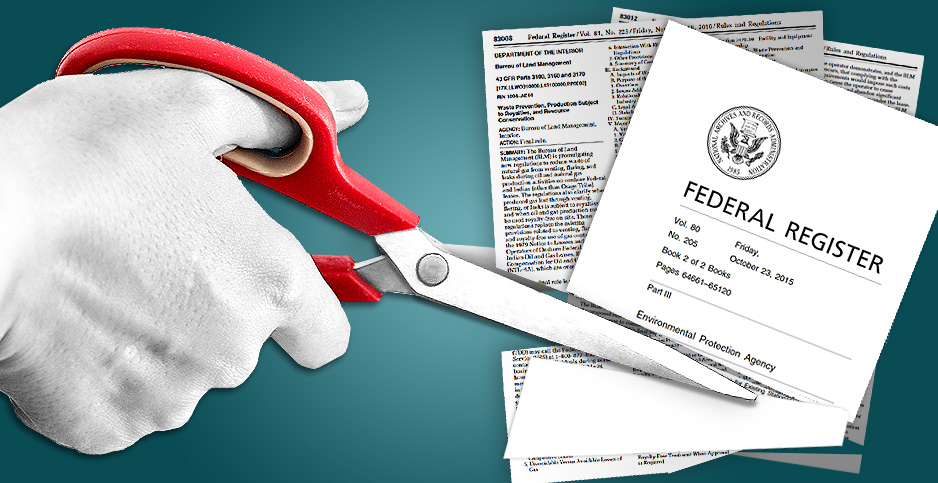 President Trump's efforts to repeal and replace Obama-era energy rules have been relentless. This year will usher in some of the first courtroom battles over the substance of the Trump administration's regulatory offerings. Claudine Hellmuth/E&E News(illustration); hand(freepik); scissor blades(comet27/wikipedia); documents(govinfo.gov)

After suspending and rescinding many of the energy regulations introduced under former President Obama, the Trump administration is in the initial stages of writing its replacement rules.

As those texts are finalized, each will almost certainly be subject to legal action. Over the last two years, the courts have fielded a flurry of challenges to delays of Obama-era energy rules. This year will offer answers from the courts on the substance of President Trump’s revision rules.

"It was just frenetic," Bethany Davis Noll, litigation director for New York University’s Institute for Policy Integrity, said of last year’s suspension challenges. "Now it will be a little less so, but the issues are going to be a lot more serious."

First up is the revision of the Bureau of Land Management’s 2016 methane rule, which the Trump administration unveiled last year. The meat of other planned rollbacks, such as EPA’s Clean Power Plan and methane standards, will be tested in court once those replacement rules are finalized.

Offshore, the Trump administration’s efforts to retool safety regulations while opening new federal waters to leasing will be particularly controversial.

Cost-benefit analysis will likely be central to the challenges. The revised BLM methane rule, for example, came under early criticism for too heavily favoring industry savings above forgone climate benefits.

“The courts tend to defer to the agency’s decisions, but now the courts are going to have two whole dockets pointing them in two different directions. So what do they defer to?”

Obama’s methane rule estimated that avoiding greenhouse gas emissions would result in net societal benefit — even if implementation came at a price for industry.

"The courts tend to defer to the agency’s decisions, but now the courts are going to have two whole dockets pointing them in two different directions," said Susan Dudley, who led the Office of Information and Regulatory Affairs under President George W. Bush. "So what do they defer to?"

Judges tasked with reviewing the new rules will be paying special attention to the Trump administration’s justification for each overhaul, she said.

"They definitely need to spend a lot of time on building the record and explaining why their approach either to the analysis or the legal or statutory requirements is clear and better than the previous administration’s," Dudley said.

"If they can’t do that, they will be overturned."

Here’s what to expect in litigation this year over the Trump administration’s regulatory repeals:

After a mess of suspension challenges targeting multiple delays of the Obama-era BLM methane rule since early 2017, the Trump administration in September locked in its own revision rule.

The lawsuit, filed in the U.S. District Court for the Northern District of California, rests on three critiques of the Trump revision rule: that the administration failed to provide a reasoned analysis for the overhaul, that the replacement regulation inappropriately defines oil and gas waste, and that Trump’s BLM neglected to take a hard look at the climate impacts from the new rule.

Briefing in the case is set to begin this week.

A final Affordable Clean Energy (ACE) rule had been expected in March, but the ongoing government shutdown could bump out that deadline (E&E News PM, Jan. 10).

Once the replacement rule is finalized, immediate legal action is expected.

In their comments on the proposed ACE rule, 19 Democratic state attorneys general outlined their case against the Trump regulation. Among other issues, they wrote, the ACE rule undercuts previous statements from EPA that climate action can succeed only if the agency takes meaningful steps to curb carbon dioxide emissions from power plants.

Trump administration officials have said the ACE rule takes care of concerns that the Clean Power Plan was an overstep of EPA’s authority.

The Supreme Court in 2016 iced the Obama-era rule.

As with the ACE rule, the thrust of EPA’s revised methane rule will not be subject to legal action until the regulation is finalized.

Opponents of the Trump White House’s regulatory machinations have already hinted at a courtroom bloodbath.

EPA has said it plans to finalize the rule by June.

The Trump administration tried to postpone implementation of the Obama-era standard, but the U.S. Court of Appeals for the District of Columbia Circuit struck down the delay.

A group of royalty advisers assembled by former Interior Secretary Ryan Zinke could this year propose to replace a rule that died in the early days of the Trump White House.

In its repeal of the fossil fuel valuation rule, Interior’s Office of Natural Resources Revenue noted that the Royalty Policy Committee would help the federal government secure a fair value on the oil, gas and coal that is extracted from public lands.

Last fall, the group signaled that it could soon write a replacement of the valuation rule (Greenwire, Sept. 14, 2018).

Any proposal that the committee pushes through would likely be subject to legal challenges. The panel itself is already at the center of a lawsuit that alleges violations of the Federal Advisory Committee Act, which requires open meetings and public involvement.

"The rule that is likely to come out of the Royalty Policy Committee as it currently stands is likely to favor on net the fossil fuel industry," said Jayni Hein, policy director at NYU’s Institute for Policy Integrity.

The royalty committee had been scheduled to hold its next meeting Jan. 31 in Phoenix, but the government shutdown appears likely to delay the gathering.

Proposals to change offshore safety rules introduced in the wake of Deepwater Horizon are likely to face legal scrutiny in the coming months.

Opposition could come in the form of lawsuits over the specifics of the federal government’s deregulatory actions. Interior’s Bureau of Ocean Energy Management is expected to lock in its changes to the 2016 blowout preventer and well control rule by the end of the year.

Critics could also push back by challenging the Trump administration’s efforts to open new parts of the U.S. outer continental shelf to offshore oil and gas development. A new draft of BOEM’s five-year leasing plan had been expected this month, but the lapse in government appropriations appears to have stalled the document’s release.

State attorneys general from both parties have promised to fight the administration’s proposal to lease more than 90 percent of federal waters.

They have already jumped into a courtroom battle over preliminary permits to locate oil and gas deposits off the Atlantic Coast. Ten East Coast state attorneys — both Republican and Democrat — have signaled their support of the lawsuit.

Many of those same officials have pledged to sue the federal government if it proposes to drill off their state coastlines.