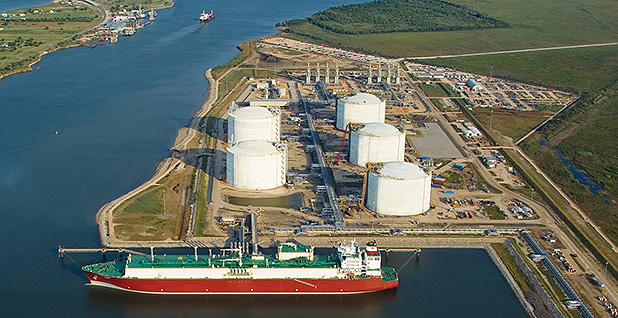 That was the takeaway from an updated report the Department of Energy outlined yesterday in the Federal Register. The analysis from DOE’s National Energy Technology Laboratory echoed the summary of an NETL study released in 2014.

"This analysis has determined that the use of U.S. LNG exports for power production in European and Asian markets will not increase GHG emissions from a life cycle perspective, when compared to regional coal extraction and consumption for power production," the report said.

The DOE study comes as the gas industry has sought to position itself as a cleaner alternative to coal and a complementary resource to renewables. The Trump administration has also pushed an "energy dominance" stance to promote the use of American energy. Federal Energy Regulatory Commission Chairman Neil Chatterjee, a Trump appointee, said in an interview with E&E News this week that U.S. LNG exports could help lower global carbon emissions by displacing more carbon-intense fuels in Asia and elsewhere (Energywire, Sept. 17).

"As much as Trump doesn’t want to admit it, there’s actually a lot of similarities … on LNG policy between the Obama administration and the Trump administration," Slocum said.

For all 100-year horizon scenarios, the new report said, power generation from natural gas has lower life-cycle greenhouse gas emissions than generation from regional coal. It said the interpretation of 20-year gas scenarios "is more complex due to the tradeoff between upstream GHG intensities and end use efficiencies."

DOE said the updated LNG report and related comments will go into the dockets of 42 long-term LNG export proceedings, including 16 pending applications that seek authorization to export U.S. LNG on waterborne vessels from the Lower 48 states to countries without free-trade agreements with the United States.

The analysis relied on some changes compared with the 2014 report. That included incorporating updates on the characterization of natural gas production; processes related to liquefaction, ocean transport and regasification; and the 100-year global warming potential for methane.

The "cradle-to-grave" analysis "begins with extraction of natural gas or coal and ends with electricity delivered to the consumer," the document said. It used five life-cycle stages and various scenarios for Europe and Asia.

Nathan Matthews, a senior attorney at the Sierra Club, said he suspects DOE is underestimating emissions. The environmental group has criticized and challenged LNG export projects in the past.

Matthews said DOE’s report focused on U.S. LNG exports’ role in displacing coal or gas without addressing how they would displace renewables or conservation and efficiency. Without that information, he said, there’s not a full picture of the climate impact of LNG exports.

"The issue is not just whether or not LNG might be a little bit better than some of the fuel sources now, but whether 20 years from now, while these projects are still in operation, can we afford to be having this kind of fossil fuel use and the associated emissions?" Matthews said.

Slocum said Public Citizen will be examining the methodologies in the DOE study.

"Given the fact that the administration is proposing to significantly weaken methane emission regulations, it’s unclear how LNG exports can successfully mitigate emissions overseas," Slocum said. "That’s something that we’re going to be looking at."

DOE said comments are due by 4:30 p.m. EDT on Oct. 21. As parties dig in and consider formal comments, gas supporters offered praise.

"The best way for us to address climate change is to help the world replicate the U.S. experience, which means increasing LNG exports to our trading partners in Europe and Asia," Everley said in a statement.