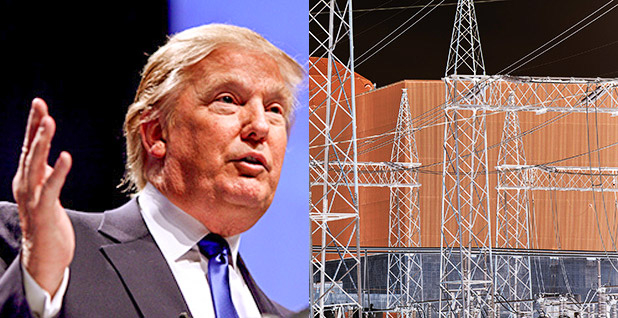 In the aftermath of Donald Trump’s win Tuesday, executives, regulators and clean energy advocates viewed the president-elect’s caustic attitude toward carbon-free energy with a glass-half-full attitude. Even as they expect the pace of change in the electricity sector to slow, they don’t expect a reversal of trends already baked into an era of advancing energy technology.

For years, the nation’s power sector has been "in the midst of a profound transformation," Tom Kuhn, president of the Edison Electric Institute, said in a statement congratulating Trump.

As voters went to the polls Tuesday, and all indications suggested Democratic candidate Hillary Clinton would prevail, CEOs of investor-owned utilities at EEI’s annual financial conference in Phoenix were taking questions from analysts about how to capitalize on U.S. EPA’s Clean Power Plan.

"The overwhelming consensus on the election was that Clinton was going to win and that the regulatory environment will be fairly stable as investors anticipate a similar outlook," said an analyst there.

The power-sector transformation has featured the shift from coal to natural gas; accelerating deployment of wind, solar and energy efficiency technologies; commitments to curb carbon dioxide emissions from power plants; and new business models that allow utilities to remain profitable even as demand for electricity is flat or declining.

The coal industry took special pride in Trump’s victory over former Secretary of State Hillary Clinton but also recognized that the fate of coal-burning power generation still rests in a federal court.

Hal Quinn, president and CEO of the National Mining Association, said he expects Trump’s election to slow the pace of coal-fired power plant closures tied to environmental regulations, particularly if courts set aside the Clean Power Plan, which aims to cut power-industry carbon emissions. For coal-burning generators on the way out, "it’ll give them a better glide path," he said.

"They would have to ask, ‘Are we going to make investments in new generation if we don’t have to, because one of the reasons that was compelling us to do it is no longer in effect?’" he said, referring to the Clean Power Plan.

For the nation’s coal-dependent electric cooperatives that operate in 47 states, Trump’s win is "going to help us have a conversation about the true impact of what the Clean Power Plan would have caused for individual co-ops in America," said Jim Matheson, CEO of the National Rural Electric Cooperative Association. The new administration "is not going to be pressing to enhance the targets in the existing Clean Power Plan," he said.

The difference with Trump and a Republican-led Congress is that "changes in the industry are going to be more market-driven than through government regulation," Matheson asserted.

Kathleen Hartnett White, director of the Armstrong Center for Energy and the Environment at the Texas Public Policy Foundation and a Trump adviser, suggested Trump may look to create an energy regime that doesn’t pick winners and losers. She cited issues with renewable energy subsidies, including a production tax credit for wind and a separate credit for solar, which Congress renewed last year. "At this point in time, I say let the market operate," she said.

White recommended that Trump suspend the Clean Power Plan. She called for the administration to analyze the legality of the plan and its assertion of regulatory authority over the power sector under the Clean Air Act.

"A lot of the initial concerns about how to meet the climate goals that were expressed as part of the CPP I think are going to happen anyway," he said.

"I’m very fearful of what the Trump presidency is going to mean," he said. "However, there are market forces that have been unleashed that are going to accomplish a large part of the Obama administration’s climate commitments around power plants."

Eric Skrmetta, a member of the Louisiana Public Service Commission who helped lead Trump’s campaign in the state, predicted that the new administration will shift attention to reliability and low-priced electricity.

Skrmetta said he would like to see a review of deadlines tied to the Clean Power Plan "and the inability to achieve the goals within it. We don’t want to see utility companies being fined for an inability to comply."

The Louisiana regulator said cutting federal support for wind and solar extends a lifeline to coal, which has lost ground as a source of electricity. "If subsidies are reduced or eliminated, then I think that coal becomes [an] equal-footed player in how we approach providing energy resources to the nation," he said.

Susan Tierney, a senior adviser with the Boston-based Analysis Group, observed that "the clean-energy transition is happening just about everywhere around the country, in red and blue states, and years in advance of the first year of Clean Power Plan implementation."

Markets and state policies are on the leading edge of those changes, she said. "I don’t think that’ll change," she said. "There will be a lot of drama about reversing regulations, but that’s not a fast process."

Andy Smith, a utility analyst with Edward Jones, said he doesn’t foresee any change in the industry’s move away from coal and toward cleaner fuels, notably natural gas and renewable energy. "That stuff is going to happen one way or another," Smith said. "Even if there is some dramatic reversal in policy, I don’t think it’s going to change the direction the country is headed."

Rooftop solar giant SolarCity Corp. lost ground on U.S. trading floors yesterday along with other major renewable energy companies. That company, which has battled to keep frustrated shareholders from jumping ship, said states like California, New York, Texas and Massachusetts will continue adding solar capacity regardless of Trump’s negative comments about renewable energy during the campaign.

"And from there, you’re going to have a real split, as business and job creation are going to go to states that are making the bold moves," said Scott Hennessey, SolarCity’s vice president for policy and electricity markets.

The Southeast has always resisted federal government efforts to mess with its energy policies, so having Trump in the White House is a welcome relief for the region, which lined up to sue EPA over the Clean Power Plan.

The region is a perfect snapshot of the electricity industry in transition. Large utilities are closing coal-fired power plants, buying natural gas pipelines and figuring out where nuclear and renewables play a role. The attitude toward renewables is mixed: Publicly, policymakers and electric companies say they are for it, but plenty of lobbying is done behind the scenes to keep the regulated monopoly business model in place.

Southeast energy giants are likely going to strengthen their Washington ties under a new administration that wants to scrap environmental regulations and gut parts of EPA.

Longtime Trump supporters and detractors in the region say the region’s energy policies will continue to evolve on their own. Trump will be hands-off on what state legislatures want to do, they say, which means no "overreaching" regulations.

It also means renewables, particularly solar, can be a part of the mix if it makes economic sense.

"Right now, his approach is not to have these regional transmission organizations," said Georgia Public Service Commissioner Lauren "Bubba" McDonald Jr., a Trump supporter who endorsed him late last year. "He’s going to defuse a lot of the regulations that are in place right now and get it back to where a business can manage its business."

The Southeast has added significant amounts of solar compared with just a few years ago. Most of the solar is coming from large, utility-scale projects, and distributed generation continues to lag.

States are taking steps to craft policies to boost rooftop solar, but electric companies continue to push back. Utilities continue to grapple with how to incorporate distributed technologies onto the grid and into their 100-year-old business model, and a solution is a long way off.

Their answer is to throw up regulatory barriers, and this is where Trump can help, said Debbie Dooley, a Georgia tea party activist who has made a name for herself nationwide fighting for an open market for rooftop solar.

Dooley has been outspoken about removing government barriers that have prohibited rooftop solar and said she thinks Trump will support the same free-market policies. "He’s made a statement about the corrupting influence of monopolies, so I think he will be a very free-market choice," she said.

An administration that leaves energy policies to the states also leaves the door open for environmental advocates to do their work, one attorney argues.

"A lot of times, arguments are so very far removed from [federal debates] and may not really be buffeted by the political winds that are happening at the federal level," said Frank Rambo, senior attorney and head of the Southern Environmental Law Center’s Clean Energy and Air Program.

One example is a state regulator opting to approve solar projects or programs because they make economic sense, he noted, or a conservative state that passes a law to regulate coal ash.

"I think our attitude is, the issues and the problems that we tackle on the state level are still going to be there, and we’ll still be working on them," Rambo said.

During his victory speech yesterday morning, Trump said, "We’re going to rebuild our infrastructure, which will become, by the way, second to none. And we will put millions of our people to work as we rebuild it."

Investment bank Evercore, in a note, said Trump’s win is "NOT bad for growth at utilities given focus on stimulus."

"State level renewable portfolio standards drive growth," it said, and that "type of spending falls in the infrastructure focus."

A parade of clean-energy interest groups issued statements saying they are "looking forward" to working with a new president and Congress, casting themselves as natural partners in any infrastructure program.

The American Wind Energy Association cited Trump’s not-too-specific mention of infrastructure spending, noting that "wind power is some of the best infrastructure America has ever built and we are on track to doubling it from today’s levels by 2020."

Alliance to Save Energy President Kateri Callahan said her group would support the "new Administration’s efforts to rebuild America’s infrastructure and manufacturing sector, through the key role of energy efficiency."