Trump’s energy agenda hits pitfalls in ‘slog to the finish’ 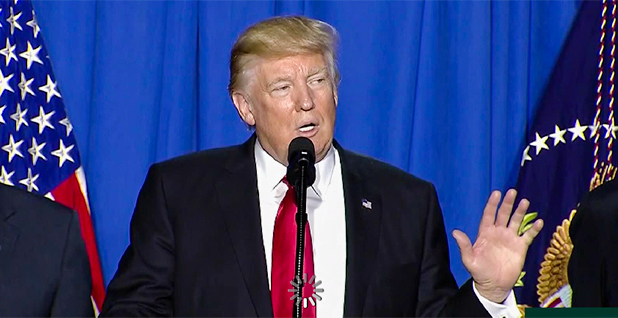 The Mueller report, rulemaking deadlines and government paperwork all could influence President Trump's ability to implement his "energy dominance" agenda through 2020. C-SPAN

Like his predecessor, President Trump has pursued many of his energy goals via executive actions.

But his agenda may soon be impeded by a lack of precision and time.

"It’s been a solid if unspectacular couple of years clearing away the wreckage of the Obama years," said Republican energy lobbyist Mike McKenna. "The challenge from here is to articulate and execute an agenda going forward."

Trump is pushing for a number of regulatory rollbacks, including revisions to the Obama-era Clean Power Plan and Mercury and Air Toxics Standards. They are each at various stages of the rulemaking process, and supporters acknowledge that it will be a challenge to finalize all of them before the end of this term. The administration lost five weeks of work because of the partial government shutdown, which exacerbated the time crunch.

On top of regulatory changes, Trump is hoping to build up energy infrastructure projects and accelerate oil and gas development on Western federal lands and in the Arctic National Wildlife Refuge — all of which take time to plan. Environmentalists also are fighting that agenda in court.

In addition, the Trump administration hopes to open up vast swaths of federal waters to offshore oil drilling, but its five-year drilling plan has been delayed for months. Delays could prevent new oil lease sales from ever happening off the Eastern Seaboard and in the Pacific.

Adding to the uncertainties about energy expansion is the recently released four-page summary of special counsel Robert Mueller’s investigation on Russian meddling in the 2016 presidential election. That could prompt Democratic backlash but also may allow Trump to be less distracted and go on the offensive with his political agenda during the administration’s remaining 21 months of this term, according to some analysts.

Although Democratic critics will continue to debate whether obstruction of justice occurred, analysts with the nonpartisan ClearView Energy Partners noted that the White House should now have more time to work on policy. "A vindicated White House could redouble deregulatory efforts and intensify energy-relevant foreign policy pursuits," ClearView said in a research note yesterday.

Had Mueller found that Trump had colluded with Russians, the administration would have been forced to spend considerably more time on congressional oversight requests and, potentially, impeachment proceedings, ClearView said. But now, the focus may now shift to sanctions on Russia and tariffs on trade partners as well as intensified deregulatory efforts.

In general, many supporters and industry leaders believe Trump has made progress in his quest for "energy dominance." But they acknowledge that the president has also been stymied by an inability to effectively pull the levers of government. He continues to maintain a thinly staffed energy team at the White House. And several high-ranking political appointees at the agencies have not been confirmed.

"We are all rowing in the same direction, but there are not a whole lot of people in the boat," said Thomas Pyle, who worked on Trump’s transition team and is now president of the American Energy Alliance.

Other conservatives say Trump lacks a clear vision. One said the administration has "not shown much interest in thinking" beyond eliminating traces of the Obama administration.

Now, as campaign season takes off, Trump’s energy vision may become more ambiguous. McKenna said a "political lockdown" could be just six to eight months away — when campaigning takes precedence over bureaucratic efforts.

But Mueller’s findings could boost the spirits of Trump’s re-election campaign, even if the White House might be hesitant right now about getting behind new initiatives. "On the other hand," ClearView wrote, "higher hopes of a second term — in effect, more deregulatory running room — could spur the White House to pursue new opportunities."

Others stressed that Trump is not a traditional politician.

Gunasekara said she is confident that some regulatory changes, such as a final Waters of the U.S. rule, will be completed by the end of the term but said that other actions will be more difficult. She explained that proposed regulations for which the comment period has already been completed should be final by the end of this year. "Certainly, there will be challenges," she said.

Last summer, EPA proposed replacing the Clean Power Plan with the Affordable Clean Energy rule, also known as ACE. "If everything goes perfectly, they’ll be done with both power plan rules and have them litigated," added Ebell, referring to rules for both existing and new power plants. "They are kind of up against a deadline there."

‘Wealth sitting under our feet’

Three years ago, when Trump gave his first energy-focused campaign speech in North Dakota, he pledged to torpedo President Obama’s energy efforts. He told the crowd that Obama "denied millions of Americans access to the energy wealth sitting under our feet."

"Imagine a world in which our foes, and the oil cartels, can no longer use energy as a weapon," he said in May 2016.

Reviews are mixed on how successful Trump has been so far in his energy push. Greens have called Trump’s actions a disaster for climate change and the environment.

Some boons for industry have little to do with the White House — such as technology advances in hydraulic fracturing and the reversal of the 2016 ban on crude oil exports. But in other areas, they have had an impact — namely, with expanding oil and gas drilling on public lands.

In New Mexico, the administration brought in a record $1 billion in bids last fall from the industry looking to drill in the lucrative Permian Basin. But in Nevada, the exact opposite happened: The administration opened up a huge acreage of land that, in one 2018 sale, the industry expressed zero interest in (Energywire, Dec. 11, 2018).

Industry interest in drilling in the Arctic National Wildlife Refuge remains to be seen.

Two weeks ago, the public comment period closed on the Interior Department’s plan to open up the Arctic refuge’s 1.6-million-acre coastal plain to drilling, a proposal made possible by 2017 tax reform. The agency held seven public meetings, and the process is advancing despite objections from environmentalists and some tribal communities. Alaska officials have said they plan to hold the lease sales by the end of this year.

Drilling in the Arctic will certainly be challenged in court, and the future is unknown.

Similarly, observers will be closely watching the fate of the Keystone XL pipeline. That project, which Obama blocked, was a signature piece of Trump’s early campaign speeches. It would run from Alberta to Steele City, Neb. The plan has been tied up in court; the State Department is expected to soon release environmental review documents on the project.

In some ways, Trump’s energy goals in the past two years have played out like a proverbial game of table tennis. Executive orders are followed by lawsuits. Decrees issued by the agencies are matched by more lawsuits.

Overall, Pyle said, the administration has made "tremendous progress" on energy.

"We’re in the long slog to the finish line," he said, noting the impending legal battles that will soon take over. "At the same time, we’re definitely going to need a second term in order to get a lot of the other stuff done that we’d hope we could do."