Trump’s energy blitz and the legal showdown to come 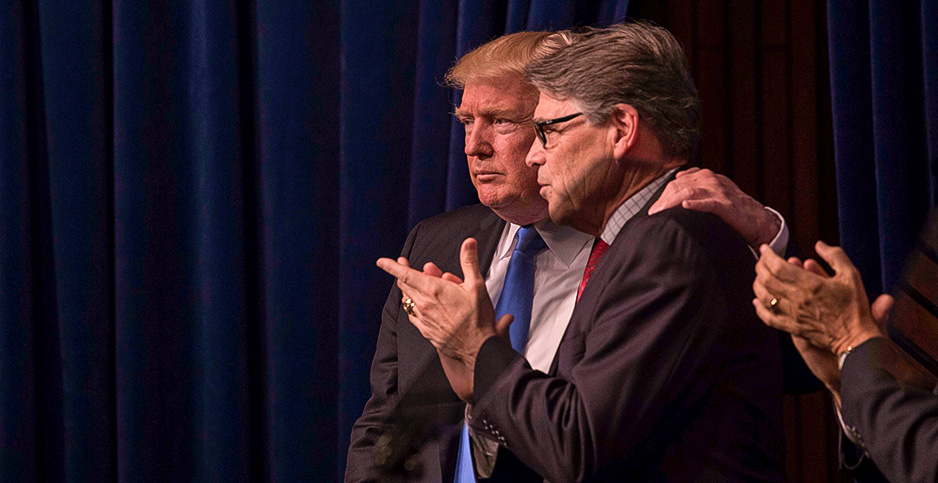 The Trump administration’s latest bid to boost troubled coal and nuclear plants is certain to spark a legal war if it’s ever finalized.

After details of a rescue proposal leaked ahead of a National Security Council meeting Friday, energy experts set to work unpacking the legal issues and gaming out potential litigation scenarios.

The draft memo out of the Department of Energy, first published by Bloomberg News, proposes using two federal laws focused on emergencies and wartime needs to extend the life of coal and nuclear power plants at risk of retiring soon. The basic justification: Those plants offer a level of fuel security the nation cannot afford to lose.

Critics of the plan call the approach an unprecedented and unlawful intrusion on power markets. They’re preparing to take it on in federal court, just as soon as the administration enacts a final policy and opponents have a clearer sense of how it works.

"It’s a mystery and a mess," Niskanen Center attorney David Bookbinder said, summing up experts’ frustration and uncertainty over what exactly the Trump administration is doing.

What’s clear is the legal fallout will be vast. Critics including energy trade groups and environmental organizations have already vowed swift and aggressive legal action if and when the time comes.

The plan to boost the lagging coal and nuclear industries is just the latest of several proposals Energy Secretary Rick Perry has studied over the past year. It combines two ideas previously floated. First, the draft draws from Federal Power Act authority allowing DOE to order plants to continue operating in an emergency.

Second, it invokes the Defense Production Act, which allows the government to prioritize certain contracts seen as essential for national security. One provision specifically allows DOE to take action to "maximize domestic energy supplies." In this case, DOE would direct electric grid operators to get power from at-risk coal and nuclear plants (Greenwire, June 1).

The combination of the two laws could make the legal fight especially tricky. With the plan still in draft form and exact obligations unknown, future legal action remains up in the air, but experts warn it’s likely to get messy.

"It’s going to be an extraordinary effort if this actually establishes itself and passes judicial scrutiny without any hiccup," Dorsey & Whitney LLP energy attorney Rabeha Kamaluddin said.

Making sense of the government’s authority under the Federal Power Act is one of energy lawyers’ simpler tasks this week. They’ve been here before.

The broad energy statute’s Section 202(c) was first discussed as an option for aiding coal and nuclear plants more than a year ago, when Perry appeared to hint at it during an April 2017 speech (Energywire, June 19).

Under the provision, DOE can order a power plant to temporarily stay open to support the electric grid in an emergency. Legal debate over the use of that authority centers on whether the U.S. grid is facing such an urgent threat.

Electric utility FirstEnergy Corp. directly requested 202(c) relief for nuclear and coal plants in March, arguing that the retirement of several facilities in the PJM Interconnection region in the eastern United States amounts to a "present emergency."

DOE’s draft proposal — which is broader than FirstEnergy’s request — continues that narrative, contending that a grid emergency is imminent because the system needs "fuel-secure" facilities like coal and nuclear plants to recover quickly from natural disasters or cyberattacks. Even a brewing emergency, one that hasn’t happened yet, is enough to trigger action, DOE says.

Some in the energy world aren’t so sure. PJM, which oversees the grid in 13 states and the District of Columbia, has maintained that "there is no immediate threat to system reliability." Consumer rights group Public Citizen argued that "Trump is imagining a crisis that doesn’t exist."

Federal courts have waded into the issue before. In a 1978 decision, the U.S. Court of Appeals for the District of Columbia Circuit upheld the Federal Energy Regulatory Commission’s refusal to use 202(c) to bolster coal-fired power during the 1973 oil embargo.

The judges wrote that the FPA provision applies to temporary emergencies, "epitomized by wartime disturbances, and is aimed at situations in which demand for electricity exceeds supply and not at those in which supply is adequate but a means of fueling its production is in disfavor."

"Courts are smart enough to recognize, if this gets there, that [202(c)] is not the appropriate mechanism to use," Bookbinder said.

If a final action from the Trump administration centered on the FPA, the legal path would be relatively straightforward, similar to a FERC process: DOE would issue an order, opponents would go through lengthy rehearing proceedings, and parties would ultimately file suit in an appeals court, likely the D.C. Circuit.

"If this were an FPA 202 order, we would have all of the same administrative process that normally governs a FERC order," University of Richmond energy law professor Joel Eisen said.

Last week’s draft memo made clear, however, that the process will probably be more complicated. That’s because of the Defense Production Act.

The Korean War-era law is designed to ensure adequate domestic supplies to keep the country safe. DOE went unchallenged when it used its DPA authority to ensure continued natural gas availability during the California energy crisis. Now the agency wants to use it to keep coal and nuclear plants level so the grid can recover quickly from a major disruption — in the interest of national defense.

With the Energy secretary part of the National Security Council advising the president on security issues, some analysts say that rationale can function almost as a trump card.

"The Defense Production Act (DPA) is a potent law that gives DOE fairly broad authority when the DOE activity relates in some way to national security matters," Morgan Stanley analysts wrote this week, adding later: "[I]n our view it may be challenging for plaintiffs to overcome a court’s likely deference to DOE’s judgment on this topic."

In general, courts offer wide deference when agencies are operating in their areas of expertise, and they tend to use a fairly hands-off approach when plaintiffs ask them to second-guess the federal government’s national security determinations.

But there’s little legal precedent to indicate how a DPA challenge would play out. While federal courts have issued decisions about contract disputes and other specific issues under the law, they haven’t reached any broad rulings about the scope of authority the DPA gives DOE, said Ari Peskoe, director of the Electricity Law Initiative at Harvard Law School.

Critics contend that DOE doesn’t have the facts to support its approach.

"It’s going to come down to being able to establish that connection between grid resilience and national security," said Kamaluddin, the Dorsey & Whitney lawyer. "Even if you were to interpret the DPA to apply outside of wartime, overcoming any legal challenge is going to have to reconcile those two.

"It would be an extraordinary argument," she added. "FERC has said we need no hand right now. Without any concrete evidence about the impacts of these retirements on the grid, I think it’s going to be a very challenging judicial analysis."

Section 101(c) of the law, which specifically addresses energy supplies, sets a backdrop for when the authority should be used: when the materials at issue are "scarce, critical, and essential."

Eisen and Bookbinder said DOE hasn’t made those findings.

"The finding that you have to make that materials are scarce and essential for energy production is not something they’ve done," Eisen said. "They haven’t done that in the memo, so unless they’re going to come up with some different record to justify that, they’re going to have a problem on review."

Opponents of the coal and nuclear intervention also dispute the notion that the DPA can be applied to private companies buying and selling power among themselves. Plus, they note that DOE has regulations on the books for implementing actions taken under DPA 101(c) — featuring formal applications, DOE findings and Department of Commerce input — but last week’s draft doesn’t reference those procedures.

"This memo has none of that process," said Smaczniak, the Earthjustice lawyer. "There’s no indication that they intend to use those regulations, so that’s immediately a red flag to say, ‘Look, they’re trying to circumvent their normal process.’"

It’s not yet clear how DOE will respond to such arguments. Last week’s leaked memo was labeled as an addendum to a larger directive that’s believed to elaborate on the agency’s legal rationale.

Unlike the FPA, the DPA doesn’t have a provision directing litigation to the appeals courts. Smaczniak said a lawsuit challenging a DPA order would likely start in federal district court and focus on whether DOE complied with the Administrative Procedure Act.

Peskoe said potential litigants should focus on the question of DOE’s legal authority, rather than arguing over the agency’s contention that the grid is in crisis and puts national security at risk.

"For a federal judge, it takes a lot to overturn an agency’s facts, especially when there’s national defense involved," he said. "But just providing those facts doesn’t just magically give DOE the authority to compel contracts for uneconomic coal generators. So I’m not sure that the DPA, even when combined with the Federal Power Act, provides that authority."

Experts say the combination of the two laws will complicate matters in the courtroom.

"I have been thinking about this ever since the memo came out, and my administrative law professor hat is working overtime trying to figure out what the heck is going to happen," said Eisen, the law professor.

He argued that while the administration seems to be invoking the DPA to bolster the FPA approach, the combination of the two authorities still doesn’t give DOE that power.

"If they invoke both statutes simultaneously, you can’t just add up the two statutes and say this is some additive process where it somehow creates some new process," he said. "You have to take each statute independently."

Smaczniak said the administration "might keep it muddled to make it harder to challenge."

"Each one of those, they’re supposed to be based on different findings, and then they have different remedies for if they are wrongly used," Smaczniak said. "So they go through very different pathways depending on which one’s used. If you try to entangle the two of them … you have to look at, ‘What are they actually trying to achieve?’"

In other words, if DOE ultimately issues a directive ordering coal and nuclear plants to stay online, that would appear to fall more under the FPA provision. If it wades into contractual issues, potential litigants could focus more on the DPA.

For now, nobody outside the administration knows what a final policy will contain and, thus, which legal standards will apply. But Trump’s team is well aware of the legal scrutiny its final actions will face.

"We want to make sure that whatever we do works and is upheld by courts. That’s what we look for," Mark Menezes, DOE undersecretary of energy, told reporters earlier this week (Greenwire, June 5).

Once a policy is finalized, the legal fight begins in earnest. A huge lineup of opponents say they’re ready for action.

"This is where we have to be thankful we have courts, and we’re in a system that relies on the rule of law," said David Hayes, executive director of the State Energy & Environmental Impact Center and a former Obama administration official. "They’re going to have to be more clear, or a court will summarily strike it down. The trouble is, they can’t invent facts or potential scenarios that don’t fit what these laws were intended to do."

Peskoe noted that challenges to any final policy would also likely land in multiple forums, both in the courtroom and before DOE and FERC.

"I suspect there will be multiple lines of attack," Peskoe said. "Which one would ultimately be the right one? I’m not sure because we haven’t seen exactly what might happen yet."