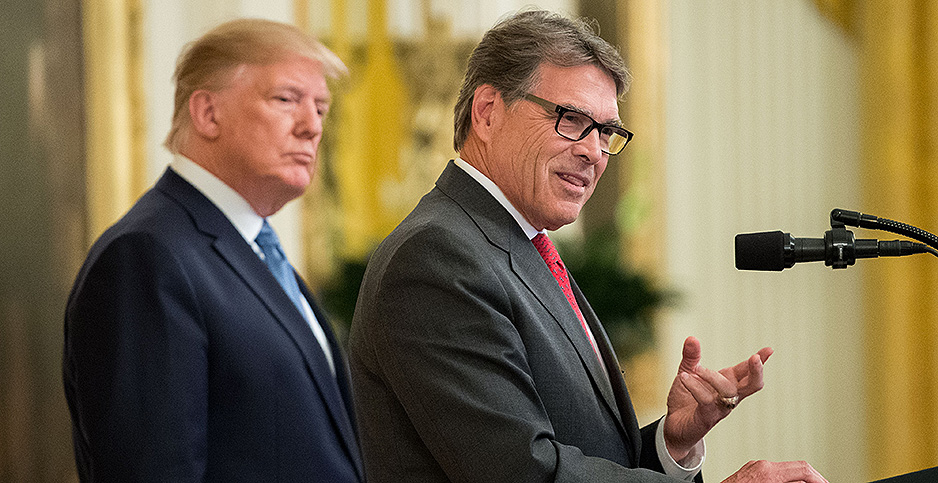 President Trump with Energy Secretary Rick Perry yesterday after a speech on environmental policy at the White House. Kevin Dietsch/UPI/Newscom

President Trump attempted to flip the script of critics yesterday, casting himself as an environmental advocate and supporter of renewable energy.

But he also provided more ammunition to opponents who say his record doesn’t support those assertions and stirred up debate about whether yesterday’s speech was an energy playbook for 2020.

"There is a very good place for solar energy. I’m a believer in solar energy," Trump told reporters at the White House in wide-ranging remarks on the environment. "It has not fully developed, but it has a tremendous future."

Yet in the past 2 ½ years, Trump has slapped tariffs on solar cells and modules and has repeatedly proposed cutting the budget of the Energy Department’s solar office. He also has aimed to throw coal and nuclear power financial lifelines.

During the speech, Trump emphasized clean air and water and emissions reductions from natural gas exports, and cast the Green New Deal as a job killer. He only briefly touched on energy and electricity, and at the start of the event failed to announce Energy Secretary Rick Perry, who spoke alongside other Cabinet members.

Perry stressed the Trump administration’s commitment to the environment. He said his agency is supporting technologies "literally cascading across this country in ways to use energy more cleanly, more efficiently," and pointed to carbon capture and sequestration and zero-emission nuclear power.

"Too long, there has been this conventional wisdom that you have to choose between economic growth and environmental freedom," Perry said. "That’s a false choice."

The White House event — billed as "America’s Environmental Leadership" — appeared to be an attempt at a victory lap. While Trump has repeatedly touted energy independence, yesterday was one of the first times this year he has pulled together several environmental issues and tied them to his energy policies.

Trump’s comments are bound to stir up speculation about his energy strategy in 2020. Indeed, before the speech, the president’s supporters had predicted Trump would follow a similar campaign strategy in the months ahead.

"I think a lot of [his campaign] is going to focus on the strides that have been made to date and taking the victory lap," said a former Trump campaign official who spoke on the condition of anonymity before the speech. "I don’t know how much it’s going to be forward-looking."

Trump supporters and observers said they expected him in the next year to paint energy and environment with a broad brush, avoiding details and using bumper-sticker figures. They anticipated that Trump would emphasize that he kept his campaign promises by unwinding what he saw as suffocating Obama-era environmental and climate rules, his supporters said. And they predicted that newly empowered Democrats in the House of Representatives would give him a new punching bag.

"I would imagine he will ridicule the Green New Deal over and over, talk about how Democrats want to take away your cars and shut off your electricity," said Norm Ornstein of the American Enterprise Institute.

Trump blasted the Green New Deal and the many Democratic climate plans as "radical," declaring that "they would not make the world cleaner."

And he evoked a familiar theme outlined in North Dakota in 2016. Then-candidate Trump contrasted his energy policies with the Democrats’ as "wealth versus poverty." He charged that his plans would unlock abundant resources and keep energy costs low, while his opponents’ would harm average Americans.

Similarly, Trump said yesterday that the Democratic climate plans "would put Americans out of work."

But how much yesterday’s speech will echo Trump on the campaign trail — or signal his energy legacy — remains unclear.

At past green events, Trump has stressed his deregulatory efforts, even if his success has been mixed. Analysts note that many of those efforts have been held up in court or otherwise delayed, including the offshore drilling plan and the methane plan. Separately, EPA Administrator Andrew Wheeler told reporters on a call yesterday that the methane rule would be released next month.

At the White House, Trump reiterated criticisms that the Obama administration waged a "relentless war on American energy."

"The U.S. is now an exporter of clean American natural gas," he declared, mimicking remarks he has made many times in recent weeks.

But the energy boom on federal lands began in the Obama era or even earlier. Even so, his supporters say Trump’s rhetoric is not out of line.

"Presidents get credit and blame for stuff they are not always in control of," Tom Pyle, the head of Trump’s energy transition team, said before yesterday’s speech.

Pyle, president of the conservative American Energy Alliance, said the biggest difference between now and 2016 will be that Trump has a record to run on.

"He’ll point to the fact that he has pretty much reined in an out-of-control EPA and make the case he’ll have a lot more to do," he said.

And yet some at think tanks have said Trump has accomplished little on energy, particularly on coal and nuclear power. His botched plan last summer to offer a lifeline to coal and nuclear plants has not gained traction. And his administration’s recent release of the Affordable Clean Energy rule — replacing the Obama administration’s Clean Power Plan — is not expected to extend the lives of many coal-fired power plants as renewables and natural gas have become cheaper and more pervasive (Energywire, June 18).

"The two things he touts — nuclear and coal — he went zero for 100 on," said Paul Bledsoe, an adviser at the Progressive Policy Institute. "I think smart Democrats should be making the case that he is totally out of touch."

Last year, renewables, natural gas and nuclear energy made up 72% of electric generation. The U.S. Energy Information Administration predicts electricity from coal will continue to drop and will make up just 23% of electricity in 2020. That would be a 4-percentage-point decrease in two years.

"The proof is in the pudding," said Bledsoe, a former Clinton White House aide.

Pyle, however, thought Trump would continue to talk up coal.

"I think coal country is going to recognize his efforts, and I think they are going to be very supportive," he said. "I think they recognize there are other forces in play, and other things are beyond his control."

According to Bledsoe, coal is a "cultural touchstone —- not a practical energy issue."

"So he’ll invoke these things as much as a matter of culture wars rather than actual energy policy. And so, in that sense, they are immune to the actual facts," he said.

Kenny Stein, an author at the American Energy Alliance, said it is too soon to measure Trump’s success on energy. He noted that much of the recent oil and gas production increases date back to leases in the Obama era or even earlier.

"The change is in the right direction, but too soon to know how big an impact there will be," he said.

That’s not expected to alter how Trump speaks on the campaign trail in the next year and a half — especially when he’s in major energy-producing states, analysts said.

The GOP playbook on the Green New Deal, meanwhile, has been to paint the Democratic Party "in a way that has little or no connection to the facts," said Jeremy Symons, an energy consultant formerly with the Environmental Defense Fund. He dismissed the idea that Democratic infighting on climate policies could benefit Trump.

"For Democrats to self-censor what they want to do on climate change for fear of attack of Trump would miss the point entirely," he said. "Trump is going to make up his own lies about what the Democrat climate plan is, regardless of what’s in it."

But Trump supporters say the divide between the president and the Democrats on energy is material and a quintessential pocketbook issue.

"The Democrats have gone crazy," said energy consultant Mike McKenna. "They are now in a bidding war to see who will make energy prices increase the most. The president will take full advantage of that — as he should."

Similarly, Nick Loris of the Heritage Foundation said, "When it comes to oil and natural gas, we’re fat and happy, and that equates to a satisfied voter."

Still, Trump’s national energy policy approval rating has dropped 6 percentage points since the same week in 2017, according to a Gallup poll released in March. The poll has surveyed Americans every spring for the past 18 years on a range of energy policy questions, including nuclear power, fossil fuels and renewables.

The poll found that the percentage of Americans who think the United States should "emphasize more conservation" of existing energy supplies has steadily increased in the last eight years to 63%. But in the past two years, Americans also increasingly have said the United States "should emphasize production of more oil, gas and gas supplies."

In spite of the fact that the president’s poll numbers are dropping, a former Trump campaign official said promoting jobs is always a safe bet. But he added, "How much support does that get you that you don’t already have?"