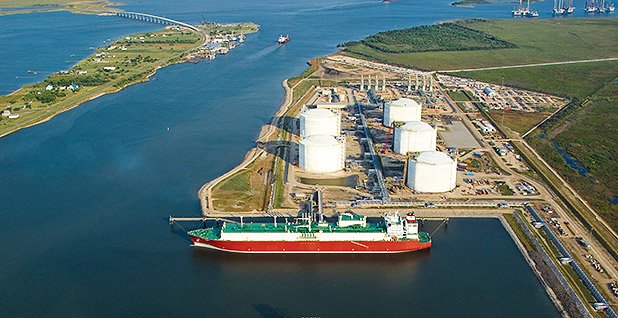 President Trump doubled down on his sales pitch today for European leaders to embrace the United States’ massive shale supplies — a message that inadvertently dovetails with some former Obama administration officials who are seeking climate action.

Speaking to a crowd in Warsaw, Poland, Trump called on Eastern European leaders to buy American gas to elbow out Russian influence.

While never uttering the words "climate" or "emissions," Trump at a meeting of the Three Seas Initiative Summit cast the United States as a trustworthy energy exporter that will come through on the fly.

"We are sitting on massive energy, and we are now exporters of energy," Trump said. "So if one of you need energy, just give us a call."

Although Trump is likely to face pushback for withdrawing from the Paris climate agreement when he arrives in Germany for the Group of 20 summit this week, the president while in Poland kept the message squarely on geopolitics and took a swipe at Russia, vowing to never use U.S. energy exports to coerce or dominate another nation.

"You don’t want to have a monopoly or a monopolistic situation," Trump said. "We are committed to securing your access to alternate sources of energy, so Poland and its neighbors are never again held hostage to a single supplier of energy."

Trump’s message will also resonate at his first face-to-face meeting with Russian President Vladimir Putin, scheduled to take place on the sidelines of the G-20 summit.

Despite Trump’s silence on climate, some Obama veterans see liquefied natural gas exports as inextricably linked to the issue. Promoting exports, they say, also falls squarely in line with the Obama administration’s past policies of combating Russian aggression while addressing emissions.

LNG "offers a unique chance to both further some of the environmental goals that we pushed in the Obama administration to reduce pollution, especially carbon pollution, because LNG is a good way to displace coal and fuel oil," said Eben Burnham-Snyder, a former Energy Department official under the Obama administration now serving as Cheniere Energy Inc.’s vice president of communications.

Burnham-Snyder added that a push for increased economic growth in the U.S. through infrastructure and creating consistent demand for gas can sustain jobs.

"Taking the reforms that occurred under the Obama administration to help unleash U.S. LNG and now taking the obvious positive attention coming from that Trump administration … [that can] help other countries mimic what’s been a success story in the U.S.," he continued.

Despite pushback from groups like Sierra Club that are suing to halt the approval and construction of export terminals and are raising concerns about hydraulic fracturing and methane, export shops continue to draw former Obama stars.

"I don’t think LNG exports have much in the way of ideological baggage," said Eric Washburn, the president and CEO of Windward Strategies, an energy and environment lobby shop.

Robert Fee, who previously served as chief of staff and senior adviser in DOE’s Office of Fossil Energy, is serving as Cheniere’s chief of staff. Yet another is Timothy Glassco, who worked on Obama’s 2008 campaign and is now lobbying for the Golden Pass LNG project on the Gulf Coast from his Austin, Texas-based firm (Greenwire, Feb. 23).

As for climate change and the Trump agenda? "It will be positive for climate to increase gas penetration, particularly in Central Asia and Europe, because it will substitute for coal and make gas affordable," Goldwyn said. "But I don’t believe that’s what’s behind the president’s message."

Goldwyn said climate and air quality concerns — alongside energy security — are driving purchases of LNG throughout Central and South America, Asia, and parts of the Middle East, but that movement has little to do with government action. "We’re landing those markets abroad because we’re competing commercially, not because the government is paving the way," he said.

Fred Hutchison, who leads LNG Allies, a group that advocates for expanding LNG shipments, agreed climate is driving demand for LNG abroad, calling it a "dominant narrative," and suggested the Trump administration’s cheerleading for exports is sending signals to energy-hungry governments and companies abroad.