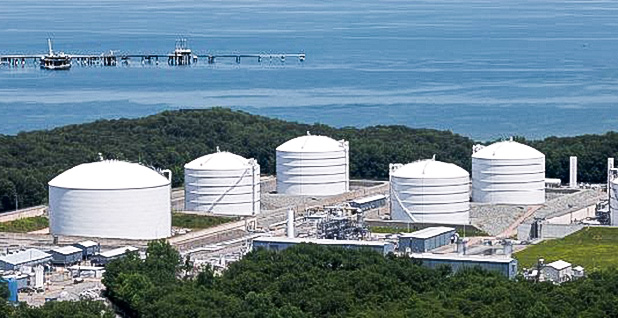 The Trump administration is hoping to beef up its "energy dominance" agenda by easing federal permitting of small-scale liquefied natural gas exports — but any grander gestures would require some heavy lifting by Congress.

And given the current state of play, particularly in the House, such a move could provide fresh fodder for a Capitol Hill showdown.

Front and center is the Energy Department’s latest move to finalize a rule aimed at fast-tracking smaller exports — no more than 51.75 billion cubic feet of gas per year — to countries without free-trade agreements with the United States (Energywire, July 25).

DOE’s rule would only apply to small projects that qualify for an exclusion under the National Environmental Policy Act, namely shipments of liquefied gas to Caribbean islands or countries in Central or South America that don’t require large tankers. The rule takes effect late next month.

DOE Assistant Secretary of Fossil Energy Steven Winberg told reporters on a call yesterday he’s hopeful the rule for small-scale projects will drive business in that sector. But when asked about expanding such treatment to larger terminals, he said no such plans are in the works — and Congress would need to get involved.

"The DOE does not have existing authority, so it would require an act of Congress to make that happen," Winberg said.

In the House Energy and Commerce Committee, Republican Rep. Bill Johnson of Ohio, a top supporter of LNG shipments, has floated legislation to scrap DOE oversight of LNG exports.

The agency determines whether a project is in the public interest, whereas the Federal Energy Regulatory Commission reviews the physical terminal for safety issues.

Energy and Commerce Subcommittee on Energy Chairman Fred Upton (R-Mich.) said in a statement yesterday, "I thank Congressman Johnson for his efforts on this matter and I hope we can get his legislation to the House floor for a vote soon."

Still, the bill has also triggered pushback and questions of national security.

The committee’s top Democrat, Rep. Frank Pallone of New Jersey, raised concerns about scrapping DOE’s review during a hearing in January and questioned whether such a process would allow members to direct money for favored projects in legislation without regard to merit or other competitive processes (E&E News PM, Jan. 19).

Rep. Jerry McNerney (D-Calif.) asked, "Shouldn’t we be careful before we greenlight unlimited LNG exports without consideration of our national security interests?"

The Trump administration has taken a multipronged approach to boosting the export and sale of the nation’s shale gas, with officials like former EPA Administrator Scott Pruitt jumping into the fray to boost exports while traveling in Morocco.

And today, Energy Secretary Rick Perry is scheduled to travel to the Cove Point export terminal near Lusby, Md., to attend a ribbon-cutting ceremony. The facility exported its first tanker of LNG in April (Energywire, April 17).

Export boosters say there may be larger gains to be made off Capitol Hill.

LNG Allies President and CEO Fred Hutchison said Johnson’s bill would be helpful. Even more helpful, he said, would be a blanket exclusion from any tariffs for steel being used to construct an LNG export terminal and a fully functioning Export-Import Bank.

That’s because the larger issue, Hutchison said, is that companies eager to export domestic liquefied gas are facing challenges in hammering out financing, raising equity and getting loans from the banks. All of that hinges on companies securing contracts to sell the LNG abroad.

"We’ve seen some movement toward new contracts in this space in recent weeks, but it’s just been a slow go," Hutchison said. "People have looked at availability of LNG now and over the course of the next couple years and viewed it as the market will be adequately supplied."

Winberg yesterday said Perry is "well aware" of the consternation among LNG exporters about the imposition of steel tariffs and quotas and has been in discussions with other administration officials, for both LNG and in the broader oil and gas space.

He then pivoted to emphasize the secretary’s success in pushing the president’s agenda of selling domestic energy.

"I’ve had the privilege of being on the road with him several times overseas, and every time, every single time, he’s been promoting U.S. energy, U.S. energy equipment and the commodity," Winberg said. "That goes beyond natural gas, he also promotes coal, oil and nuclear."